Police to use drones to keep an eye on security for gathering of ambassadors, industry captains 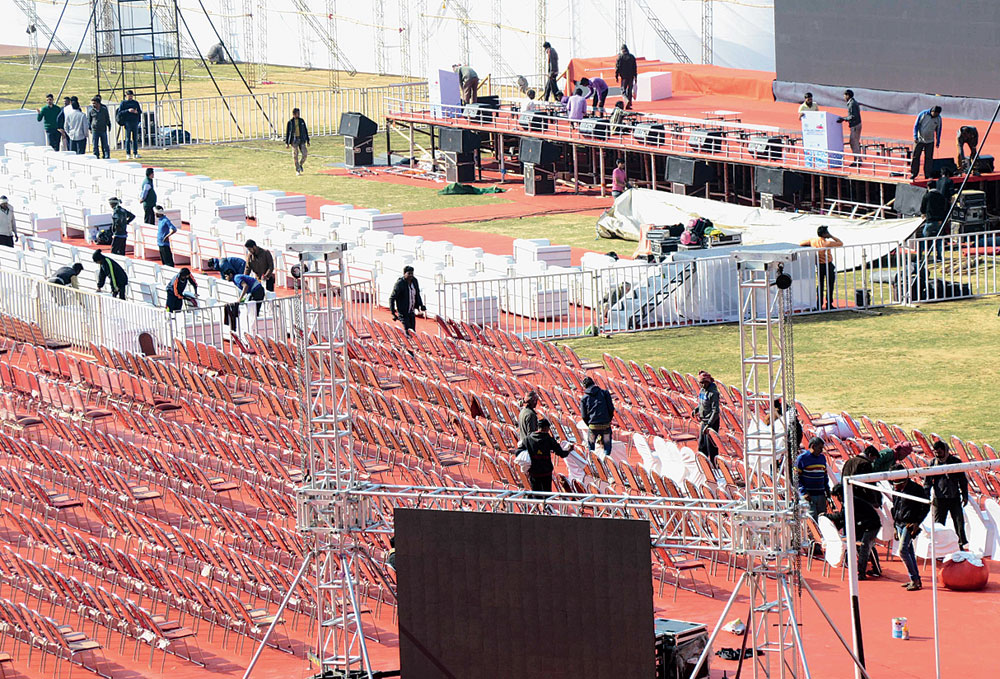 Over 20,000 people are expected to attend the state’s maiden Global Skill Summit-2019 at the mega sports complex at Hotwar on the outskirts of the capital, the daylong event promising to showcase the Raghubar Das government’s efforts at generating gainful employment for the youth of Jharkhand after training them in various disciplines.

The event will see a host of dignitaries, including ambassadors and industry captains, along with Union petroleum and skill development minister Dharmendra Pradhan, chief minister Raghubar Das and Governor Droupadi Murmu.

At the function, the state government will hand over job letters to over 15,000 youths to announce the completion of its plan to provide employment to one lakh trained youths. The chief minister will launch six skill development centres of the state while Union minister Pradhan will felicitate the top employer and the top training partner.

“We are expecting a gathering of over 20,000 from across the state There will be skilled youths waiting for appointment letters along with women self help groups in an open air pavilion spread over 9,000sq feet,” said Jharkhand Skill Development Mission Society official.

Over 92,000 candidates have already got job letters, said sources in the skill society. Over 15,000 appointment letters are scheduled to be distributed at the venue while 10 selected persons will be called to the dais and handed over offer letters.

As many as 12 MoUs are expected to be signed on the occasion.

A special message from Prime Minister Narendra Modi would also be read out. Chief minister Das would inaugurate an industrial exhibition with over 30 stalls. A five-minute film on the skill ecosystem of Jharkhand would also be screened.

Four large LED screens have been installed at various points of the venue to ensure no one misses out on the action.

Also on the cards are two technical seminars on, “Thought leadership for scale, speed and innovation for future skill readiness” and “Integrating formal education in skill ecosystem”.

Ranchi SSP Anish Gupta said elaborate security arrangements had been put in place for the day-long event. “Over 2,000 security personnel will be deployed at strategic locations. Also, 100 CCTV cameras have been installed at the mega sports complex for surveillance. We will also use drones for aerial surveillance,” he said.

Among the delegates representing various countries who are expected to speak at the event are high commissioner of Mauritius Jagdishwar Goburdhun and ambassador of Vietnam Pham Sanh. Other dignitaries include ambassador of Azerbaizan Ashraf Farhad Shikhaliyev and Panama embassy charge d’ affairs Ricardo A Berna M.