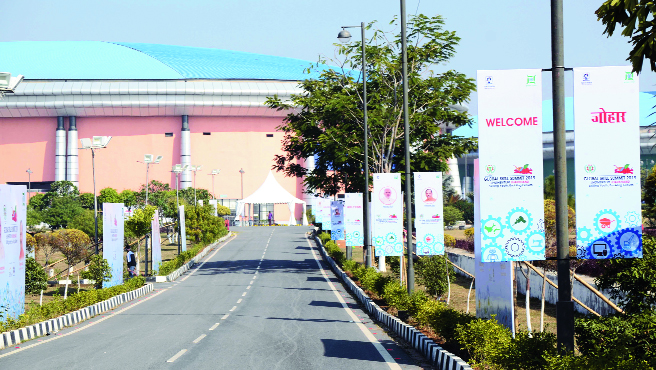 Hoardings erected at the mega sports complex at Hotwar on Wednesday for the Global Skill Summit in Ranchi.
Picture by Manob Chowdhary
Animesh Bisoee   |   Ranchi/Jamshedpur   |   Published 10.01.19, 10:18 AM

Jharkhand’s unemployment rate is among the highest in the country, according to December 2018 data released by a private think tank, the findings a tell-tale account of the crisis facing the youth of the mineral-rich state which on Thursday is hosting a Global Skill Summit that the BJP government is showcasing as its commitment to creating livelihood opportunities for the deserving.

According to its report, released on January 1, 2019, the Centre for Monitoring Indian Economy (CMIE) pegs the unemployment rate of Jharkhand at 13.6 per cent, higher than the national average of 7.8 per cent. Ranked 24th Jharkhand is at the bottom of the pile among 27 states and Union Territories.

While Goa with no unemployment (0 per cent) leads the list, Puducherry (0.5 per cent) and Telangana (1 per cent) are among the top three states.

“The monthly report was released in January. We covered nearly 4,710 households comprising both rural and urban areas in the state,” said Kuntal Saha, an official at the Calcutta office of CMIE, a Mumbai-headquartered privately owned and professionally managed company that monitors economic trends.

As per the CMIE portal, as many as 2,534 urban and 2,176 rural households of Jharkhand were included in the sample survey. In the urban areas, eight towns and 187 census enumeration blocks were covered, while in rural areas, 136 villages were covered.

Jharkhand officials manning employment and skill development departments said they had not seen the CMIE report as they were busy preparing for the global summit that will see the distribution of job letters to over 15,000 youths in the presence of state, national and international dignitaries including the state governor and chief minister, a Union minister and several high commissioners from participating countries.

After Thursday’s distribution of offer letters, the state government claims it would have provided employment to one lakh youths as per the promise of chief minister Raghubar Das. As many as 92,000 youths had already got job letters in various trades, mission director of Jharkhand State Skill Development Mission Society Ravi Ranjan had told the media on Monday.

The remaining part of the target would be achieved within the next three days, he said.

“I have not seen the CMIE report and cannot comment on it,” said Jagat Narayan, the director in the state directorate of employment and training. “We are preparing for the mega skill summit in which lakhs of youths will be getting offer letters,” he claimed.

CEO of Jharkhand Skill Development Mission Society Amar Jha iterated that the state government would complete the process of giving offer letters to over a lakh skilled youths during the global summit. “In 2017, more than 26,000 skilled youths were given offer letters. We are working on mission mode to provide skills to youths,” Jha said.

Leader of the Opposition and JMM executive president Hemant Soren, who has been tweeting regularly, has asked the state government to clarify its position vis-à-vis the CMIE survey report.

“If the claims of the survey conducted by the reputable organisation are true then there is something wrong with the execution of government employment schemes. The state government should do some serious soul searching on the lacunae of employment generation plans instead of going overboard with such skill summits,” he said.

On January 5, Hemant had referred to the CMIE report and tweeted abut how Jharkhand’s employment rate since October 2018 was above the national average. “Latest Unemployment Data from 2_CMIE for December-2018 shows 5 states with highest unemployment rates are @BJP4India ruled,” the former CM tweeted.

December 2018 data, according to CMIE