Residents of Ranchi, Jamshedpur and adjoining areas can now call an ambulance any time of the day or night, courtesy the 108 Ambulance service launched by the state government on Statehood Day. 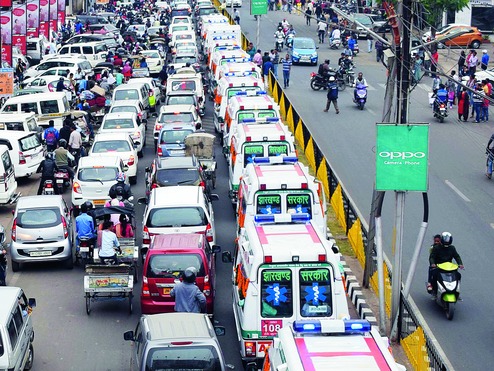 Ranchi: Residents of Ranchi, Jamshedpur and adjoining areas can now call an ambulance any time of the day or night, courtesy the 108 Ambulance service launched by the state government on Statehood Day.

According to an executive of Mumbai-based Ziqitza Health Care that is operating the service, Ranchi and Jamshedpur have been allotted 10 ambulances each. Three more would be operating along NH-33 between Chandil and Bundu while five each have been assigned to Garhwa and Palamau.

"Anyone in need can dial 108 to get an ambulance," said Sumit Basu of Ziqitza that has set up a centralised call centre at Doranda.

State health director Sumant Mishra said as many as 33 ambulances were flagged off on Wednesday. Garhwa and Palamau are the other districts that received ambulances - 5 each - but these would start plying later.

"Our target is to launch 50-60 ambulances a month till we reach 329 to cover the state. There will be one 108 ambulance per one lakh population," Mishra explained.

"When you call for an ambulance, the call centre will be able to locate the nearest vehicle in 4 minutes and assign it for you. It will reach within 50-55 minutes. That time may come down as things become smooth," he said but admitted there could be issues initially as the service was new.

Mishra hoped the remaining 22 districts would be linked to the service in the next four months.

Ranchi civil surgeon S.S. Harijan said of the 10 given to the district, two were advance life support (ALS) ambulances while rest were basic.

But for East Singhbhum, civic surgeon Maheshwar Prasad said all 10 were basic ambulances. "Nine primary health centres will be assigned on each while one will be stationed at our trauma centre at Baharagora which will be made fully functional soon," he said.

Share your views about the launch of new ambulances at ttkhand@abpmail.com.