Advertisement
Home / Jharkhand / All he hears is Radio Ga Ga

All he hears is Radio Ga Ga

On world radio day, meet a man with 200 devices 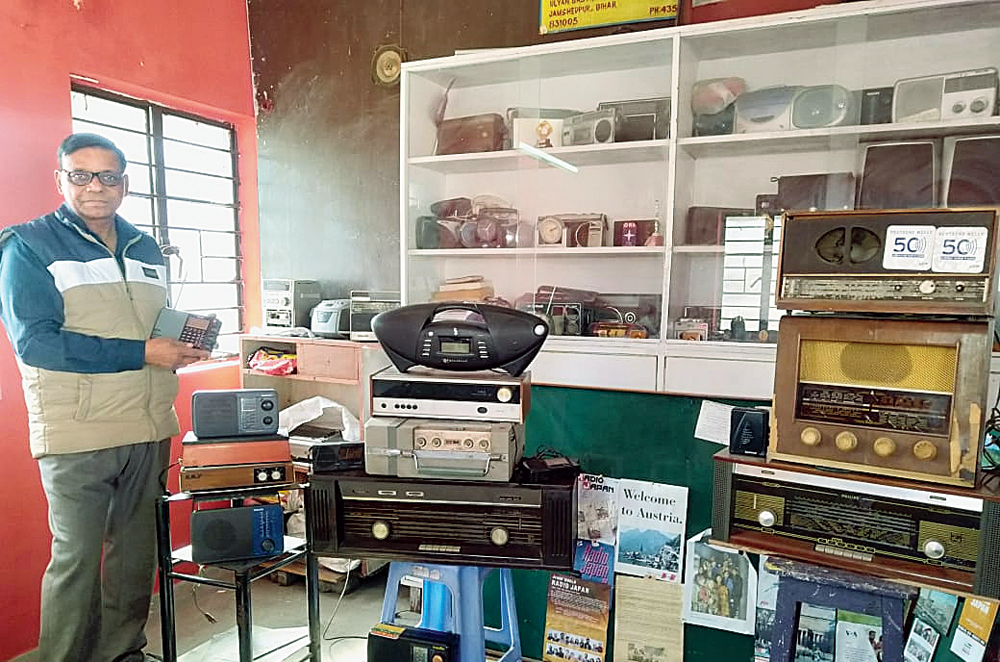 Turn on, tune in, drop out. Harvard University psychologist Timothy Leary’s phrase — that was a mantra for the counter-culture of the 1960s — applies to Chinmoy Mahto in a very different sense.

It may now be the age of world wide web, but Mahto, 64, is ruled by airwaves. Mahto, an advocate who also runs a driving school, wakes and sleeps with radios and transistors.

The Uliyan, Kadma resident, is so passionate about radios that he has built a museum of then at his home. Mahto has a collection of nearly 200 radios and transistors of various brands, including HMV, Phillips, Siemens, Kaide, Elta and even the little-known Naiwa.

“I just cannot live without radios. They are my life and I am fully devoted to them,” Mahto, who heads the Guide International Radio Listening Club (GIRLC) that he started with four others in 1974. GIRLC still has about a 100 members today, he said with a tinge of pride.

Mahto starts listening to the radio from 5am every day, tuning in to religious songs on any radio from his collection that he fancies for the day.

He added that he regularly listens to programmes in Bengali, Hindi, English and Urdu that are aired by Germany, Philippines, Japan and West Asia. “it still feels like magic,” said the elderly man who has been under the spell of radios since he was a teen. “But one has to catch the frequency (of foreign airwaves). That takes time and effort,” he added.

According to him, he never scraps radios and transistors, never mind if they don’t work. “I respect my radios as family members. It took me six months to get a 1956 make HMV transistor repaired. I knocked on the door of almost every radio mechanic in the steel city before locating one in Sonari,” the bespectacled Mahto, who often scouts city markets in search of old radios and transistors, said.

He agreed it was a love affair. “I developed a fascination for radios when I was still in school. There was no TV then. Then came TV, internet, smartphones. But I cannot dream of living without radios. I’ve won a lot of radio quizzes over the years,” he added. “I remember getting an invite from German Consulate in Calcutta in 1995 after winning a quiz on Radio Germany. Got a lot of respect,” he said.

He added that the FM wave – Big FM, Red FM, Dhamal, Mantra, AIR FM Rainbow — made a lot of youths turn back to the radio in Jharkhand. “But they usually listen to the radio on their phones or in their cars,” he said. “That’s why if you have an old transistor or radio at home, please give it to me even if it is junk,” he appealed to The Telegraph with his cell number 9234342138.