Villagers catch the reptile and bag it, snake rescuer Binod Miachel lauds them for not killing it 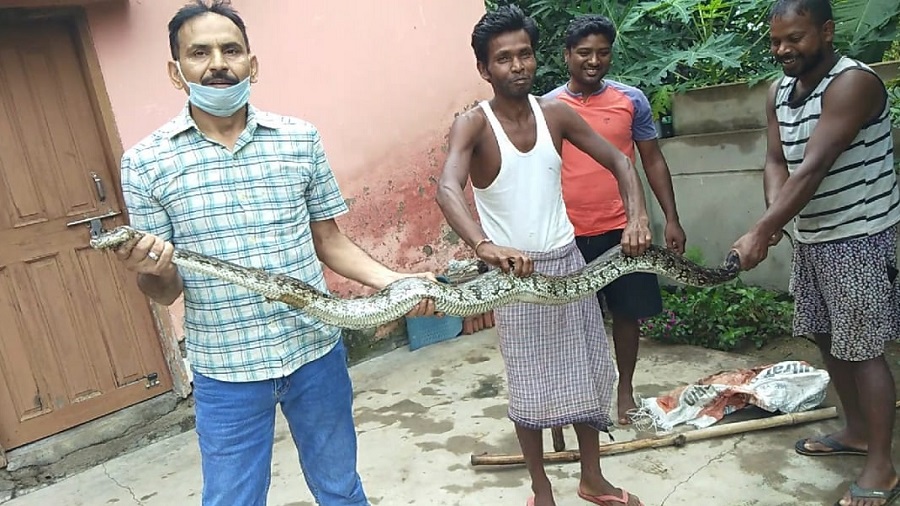 An 8-feet-long rock python was caught by villagers in Bahronpur village of Sitagarha area under Sadar block, some 10kms away from Hazaribagh town on Saturday night.

The snake was entering the house of one Baleshwar Toppo, after which the family cried for help.

Local villagers didn’t kill the python but instead, packed it in a jute bag.

On Sunday morning, they made a call to Binod Miachel, who works in Vinoba Bhave University and is known for rescuing snakes.

Miachel reached the village, retrieved the jute bag, and released the reptile into the forests of Churu close to Canary hills.

Sharma said the Churu forest is safe for snakes and they had released snakes here earlier also.

He said he was happy to see that villagers caught the python safely and kept it in a bag, instead of killing it.

“If people behave in such a responsible way, it will help in saving these creatures. Many times, people of urban and rural areas have killed the snake after seeing it near their houses,” he said.

According to Sharma, pythons are found in large numbers around Sitagarha Pahad as well as a hill in Mukundgunj close to town.

He said the rock python is in the list of endangered species and killing invites punishment.

“It’s non-poisonous and people should catch and leave them in forest areas,” he said.

He said snakes come out of their habitat during monsoon and so every year, cases of snakebite increase in the district.