8 cops, including ASI, suspended for liquor fiasco in Covid hospital

BCCL asked to showcase doctor, nurses after a prisoner drank liquor in the ward 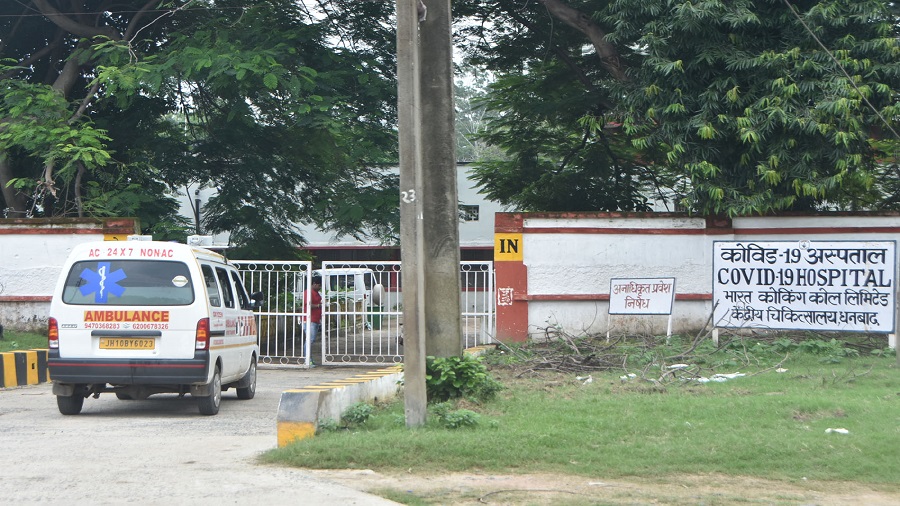 An ambulance enters the Covid hospital within the premises of BCCL’s Central Hospital in Dhanbad on Monday
Gautam Dey
Our Correspondent   |   Dhanbad   |   Published 24.08.20, 06:21 PM

Dhanbad district administration has suspended eight policemen, including an assistant sub-inspector, while the management of the Covid hospital served showcause notices to a doctor, two nurses and a ward boy after it was revealed that a prisoner consumed liquor inside the healthcare unit.

The suspension orders and the notices were issued late on Sunday night after a team of officials led by Dhanbad SDO Raj Maheshwaram visited the Dedicated Covid Hospital within the Central Hospital of Dhanbad at Jagjivan Nagar and ordered a probe into the circumstances under which the prisoner was supposedly drink liquor inside the hospital.

Photographs of the prisoner, drinking from what looked like a liquor bottle, went viral on social media on Saturday night leading to an outcry. It was also tagged to the chief minister, who asked the local deputy commissioner to initiate an inquiry.

An FIR has also been lodged at Katras police station against the prisoner for drinking in the hospital, and his friend for circulating the photographs.

Among the suspended policemen are ASI Surendra Oraon, constable Bhagi Oraon and chowkidar Bhim Karmakar of Katras police station. Others facing the axe are those who were responsible for security at the dedicated Covid hospital, namely, havildar Om Prakash Mishra, constables Kuldip Oraon, Gulab Chaudhary, Bhola Oraon and Dukhraj Oraon.

Going by the report of SDO Maheshwaram, Dhanbad deputy commissioner Uma Shankar Singh asked SSP Akhilesh B. Verior to take strict disciplinary action against the named policemen particularly for having failed to recover the liquor bottle from the hospital.

But Katras police station ASI Surendra Oraon said it was unfair to blame police for the incident.

“The police team of Katras, after arresting the criminal, got him tested for Covid and handed him over to the authorities at the Covid hospital. Hence, the police cannot be held responsible for the conduct of the prisoner, who drank liquor in the hospital,” Oraon said.

Maheshwaram explained the prisoner was subjected to a rapid antigen test for Covid as per norms on Saturday. Once he tested positive, he was sent to the dedicated Covid hospital.

He, however, tested negative for Covid after an RTPCR confirmatory test was conducted on Sunday.

The prisoner, a resident of Shiv Muhalla locality of Katras, was questioned by

the SDO and Baghmara DSP Nitin Khandelwal in the presence of the nodal officer of the Covid Hospital Dr Vishwakarma. “During questioning, the prisoner said he requested a constable to loosen his handcuffs as he wanted to take a bath. That is how the handcuffs came off,” said Dr Vishwakarma.