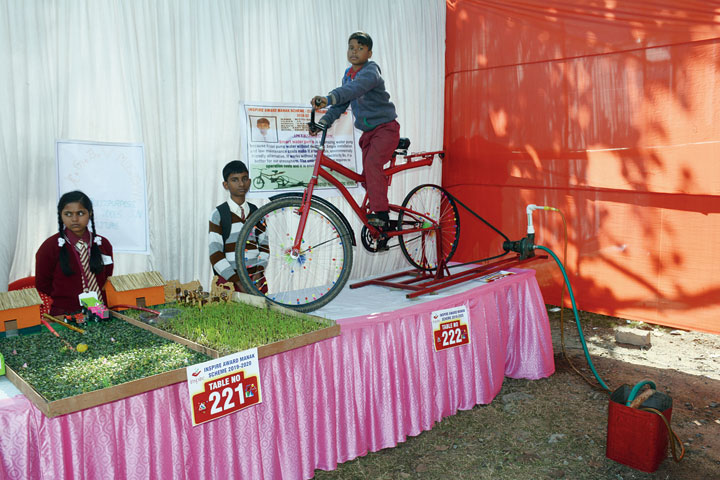 The smart cycle pump made by Bittu Das (on the cycle) at the INSPIRE Awards MANAK exhibition at People’s Academy High School in Baradwari on Tuesday.
Picture by Bhola Prasad
Our Correspondent   |   Jamshedpur   |   Published 07.01.20, 06:55 PM

Class X student Bittu Das of Upgraded High School, Marigora, in East Singhbhum had no idea what farming was but a little guidance from his bicycle mechanic father helped him make a bicycle water pump that can draw accumulated water from farms for other uses. And such a machine would not cost more than Rs 8,500.

The INSPIRE Awards MANAK science exhibition-cum-competition hosted at the People’s Academy High School in Baradwari was a display of such ideas that have the power to change the world.

Around 700 students in 240 teams from 222 schools from East Singhbhum, West Singhbhum and Seraikela-Kharsawan participated in the the Kolhan division-level exhibition.

The INSPIRE (Innovation in Science Pursuit for Inspired Research) Awards MANAK (Million Minds Augmenting National Aspiration and Knowledge) is being executed by the department of science & technology, government of India, and National Innovation Foundation-India.