Drive to be carried out everyday, except Thursdays and Saturdays 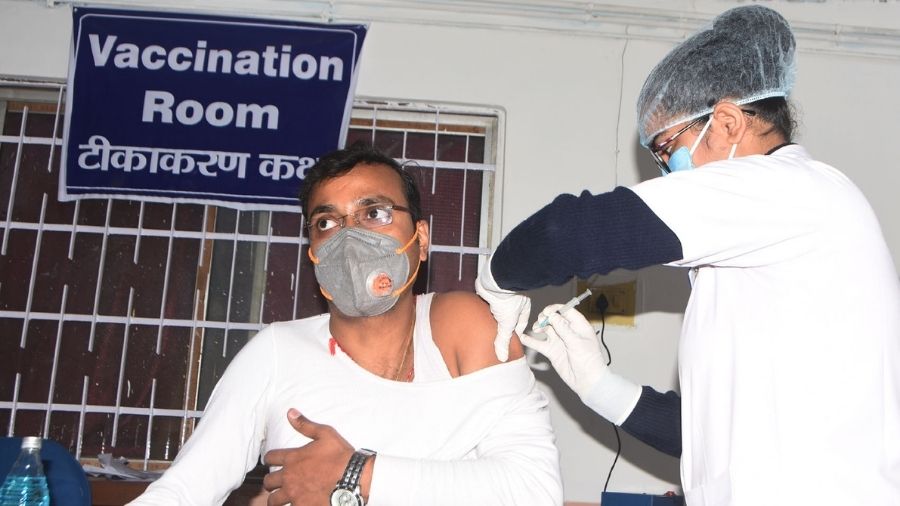 A healthcare workers administers the Covid-19 vaccine to a doctor at the Central Hospital in Dhanbad on Friday.
Picture by Gautam Dey
Praduman Choubey   |   Dhanbad   |   Published 29.01.21, 09:19 PM

Vaccination against Covid-19 kicked off at Central Hospital of Dhanbad on Friday with  Dr Pradip Kumar of the ENT department getting the first jab, while a total of 70 doctors and hospital staff were inoculated.

The number of beneficiaries could have gone up if the server had not faced a glitch for sometime, Chief Medical Officer of the hospital Ranjit Kumar Thakur told The Telegraph Online. “We began the drive without any formal inauguration at 10:30 am. We believe action speaks louder than the word. There was no adverse reaction on any of the beneficiaries during the drive,” he added.

A total of 237 beneficiaries were inoculated at four vaccination centers of Dhanbad, including Sadar Hospital, Central  Hospital, and two community health centres.

District reproductive and Child Health Officer of Dhanbad Dr Vikash Kumar Rana said the vaccination drive at all the four centres will be carried out everyday, except on Thursdays and Saturdays.

Health workers of Sarvamangla Nursing Home, and IIT(ISM) Health Centre will be vaccinated on Saturday, he added.

The vaccination drive in the district began at two rural centres January 16 and continued till January 20. In urban areas, it began on January 22 and is still continuing

The drive at two other centers, including Community Health Centre of Jharia and Govindpur, began on January 27 and is also going on. Preparations are also being made to launch the vaccination drive at some of the private hospitals of the district from Monday.