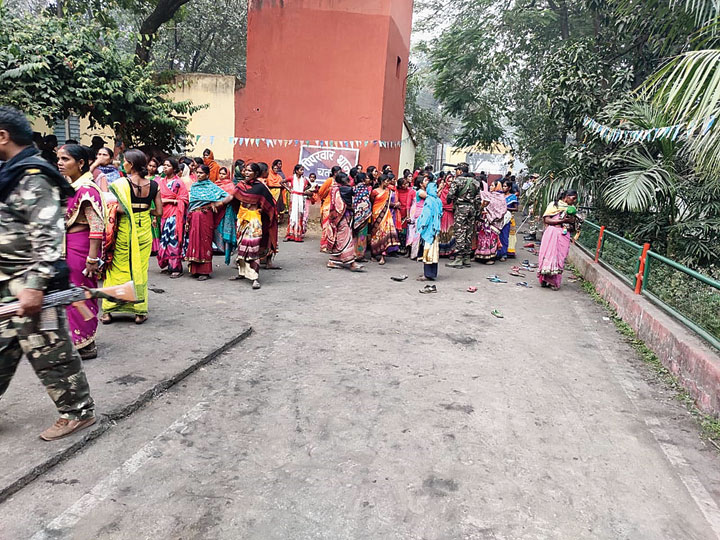 Angry residents of Bachra locality held a massive demonstration outside Piparwar police station in Chatra district, about 58km from the state headquarters, on Thursday following the recovery of two minor girls — one dead and the other injured — from the forest area bordering LO Colony.

Residents alleged that the girls were raped and dumped in the forest area.

According to a local resident, the girls, both nine-year-olds, had left their home on Wednesday to play. When they didn’t return, the family members began looking for them and informed police as well.

The girls were found on Thursday evening after an hour-long search operation by police.

The injured girl was rushed to Rajendra Institute of Medical Sciences (RIMS) in a serious condition.

Over 500 people surrounded the police station in the evening and blocked Piparwar Road.

Police resorted to lathicharge to disperse the crowd, which refused to withdraw.

“We are investigating the case and our first priority is to restore law and order. We are questioning the family members to zero in on the suspects,” said a DSP (deputy superintendent police) rank official in Chatra said.

Unconfirmed sources said some of the suspects, who are local youths, had been detained for questioning.

Garhwa: A 35-year-old woman set herself and her 14-year-old daughter on fire at their home at Belhara village here on Thursday.

While the teenaged girl Khushi Kumari died on the spot, her mother Chandravati Devi was rushed to the sadar hospital where she succumbed to her injuries.

Chandravati’s brother Jagnrayan Chaubey has told police that his sister, the second wife of his brother-in-law Arun Dubey, was fed up of the regular tiffs at home and committed suicide.

Police have begun a probe.