9 others injured are admitted to Tata Main Hospital, reported critical 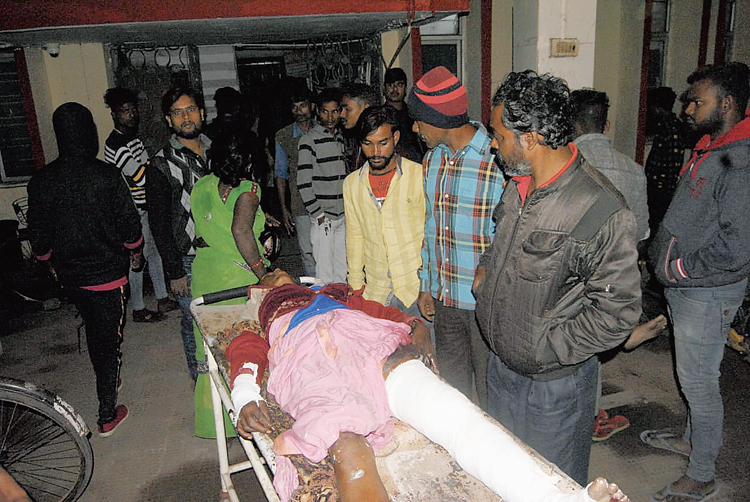 One of the injured at the MGM Medical College and Hospital on Monday night.
Picture by Bhola Prasad
Our Special Correspondent   |   Jamshedpur   |   Published 17.12.19, 06:43 PM

Two persons were killed and nine others injured in an accident on Tata-Kandra Road at Gamharia, some 10km from the heart of Jamshedpur, late on Monday evening.

The mishap took place when an overloaded auto-rickshaw heading towards Adityapur from Seraikela crashed into a trailer illegally parked close to the service lane of the four-lane road.

Those killed were identified as Bablu Lohar, 26, and Dhwani Lohar, 29, who died on the spot.

Nine others were injured three women of the same family, a two-year-old boy and the auto driver, Pintu Lohar. Pintu, admitted to Tata Main Hospital, is reported critical. The others, whose injuries are less severe, have been sent to a local nursing home for treatment.

According to eyewitnesses, the auto-rickshaw driver drove rashly and ultimately hit the trailer near Utkal Automobiles in Gamharia.

Seraikela police reached the spot soon after the mishap and seized the trailer. The auto-rickshaw was completely damaged.

Injured Pushpa Devi told The Telegraph that she and a few other residents of Salbagan had gone to the deputy commissioner’s office at Seraikela-Kharsawan to complain against the forest department’s notice asking her to vacate from her house as it was on forestland. She said their trip had been unsuccessful as they could not meet any official. On their way back home, they met with the accident, she said, tears streaming down her face.

The president of social outfit Jan Kalyan Morcha, Om Prakash, called the tragedy preventable. “Two innocent lives were lost, nine others are in pain, because an auto crashed into a trailer parked near the service lane,” he said. “On several occasions, we requested the local administration to initiate action against heavy vehicles parked on the road and on the service lane. Several mishaps have taken place in the past too due to heavy vehicles illegally parked on the Tata-Kandra four lane. But the administration paid no heed. We had decided on Sunday to start a series of agitations from next month to stop the rising road mishaps on the four lane.”