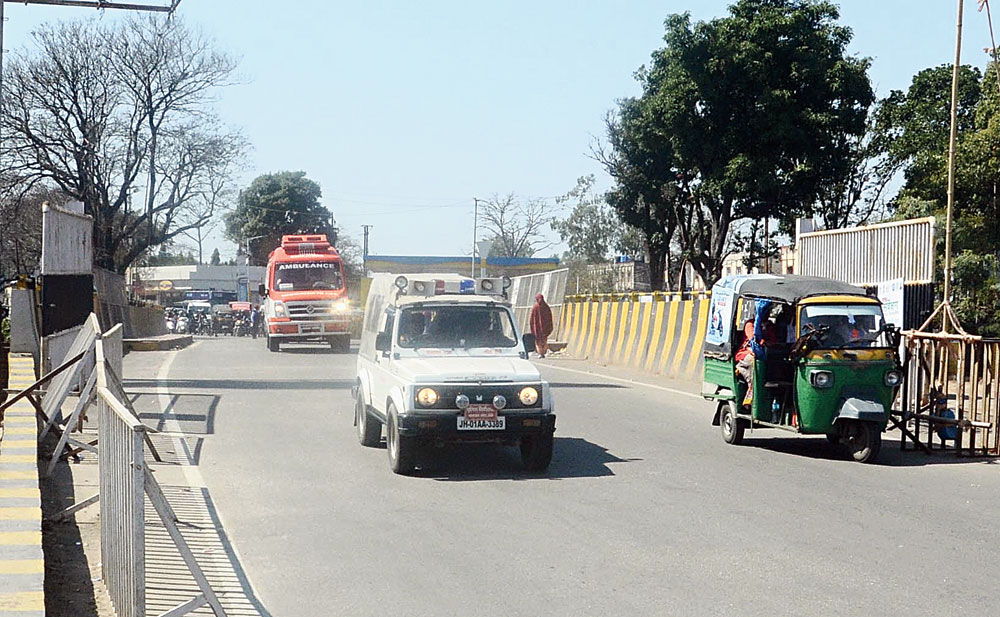 A police vehicle escorts the ambulance on the green corridor near Birsa Chowk in Ranchi on Monday.
Picture by Prashant Mitra
Our Correspondent   |   Ranchi   |   Published 11.02.19, 06:48 PM

A distance of 13.2km covered in 13 minutes. Traffic police here set a new speed record on Monday as they created a green corridor for a liver patient travelling from a private hospital in the city to another in New Delhi.

The ambulance started from Bhagwan Mahavir Medica Superspecialty Hospital in Booty at 11.53am and reached Birsa Munda Airport at 12.06pm. The route, with its usual traffic, is covered in half an hour or so.

“The patient has cirrhosis of liver for three years now. He is periodically treated by doctors at the Institute of Liver and Biliary Sciences (ILBS) in Delhi. Three days ago, he was admitted to our hospital after he vomited blood and complained of breathlessness. We stabilised him after which his family wanted to take him to Delhi. We had no objection,” said Dr Avinash Kumar at Medica.

The ambulance with paramedics was mobilised by Medanta Abdur Razzaque Memorial Hospital in Irba. Public relations officer Javed Ansari said they were more than happy to extend co-operation. “The patient is being taken to our centre in Gurgaon. This is the least we could do,” he said.

Traffic SP Ajit Peter Dundung said his men did their duty. “This is not the first time the unusual exercise has been held. Since I have been here, green corridors have been created eight times,” he added.