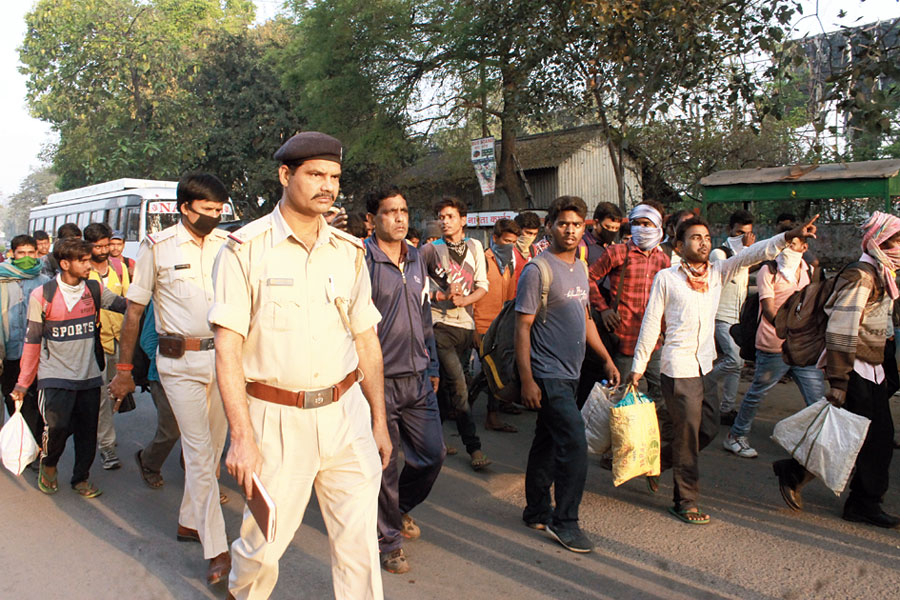 Thirteen special buses arranged by the district administration ferried hundreds of stranded passengers to districts as inter-district public transport was shut for the lockdown.

Nearly 400 passengers had arrived by trains at Tatanagar station on Sunday morning and were caught in the Janata Curfew. They somehow managed to reach the city’s lone interstate bus terminus at Sitaramdera hoping to board buses to reach their homes.

However, they could not find buses and had to wait till Monday morning. Their frustration turned into anger when told about the government’s lockdown that barred buses from plying.

Uday Sharma, president of the Jamshedpur Bus Owners Association (JBOA) — an umbrella body of the long distance bus operators — said: “Nearly 400 passengers virtually blocked the bus terminus roundabout which connects the city with Mango on Monday morning. It was then that the administration intervened and gave us special permission to take the stranded passengers to different districts.”

Sharma added: “They had boarded trains on Friday and reached steel city from Gujarat and Maharashtra. They usually come to Jamshedpur as more trains from western states reach the steel city in Jharkhand than state capital Ranchi. And normally, they get connecting buses to other districts from Jamshedpur. But since Sunday (Janata Curfew) no buses plied from the terminus.”

He said that when bus authorities tried to make passengers understand, they got angry and blocked the road. “We agreed to ferry the passengers only after we got a written permission from the district administration.”

Additional district magistrate (law and order) Nand Kishore Lal said that the administration gave a written permission to bus operators who agreed to ferry the passengers on payment of fares.

A contract worker from Ahmedabad, Alok Kumar, whose home is in Giridih, said: “After our work stopped due to novel coronavirus we had to return. I reached Jamshedpur on Sunday morning by Ahmedabad-Howrah Express and had to board a bus for Giridih. We were stranded at the Tatanagar station for hours and anyhow reached the Sitaramdera bus terminus late evening on Sunday when a few auto-rickshaws started plying. But no buses were running. On Monday morning, when we learnt that no bus would ply till March 31, we lost our patience. But we are thankful to the administration for arranging special buses.”