Biggest success of CM was his ability to boost delivery system during pandemic in a state lacking medical infrastructure: Journalist Sudhir Pal 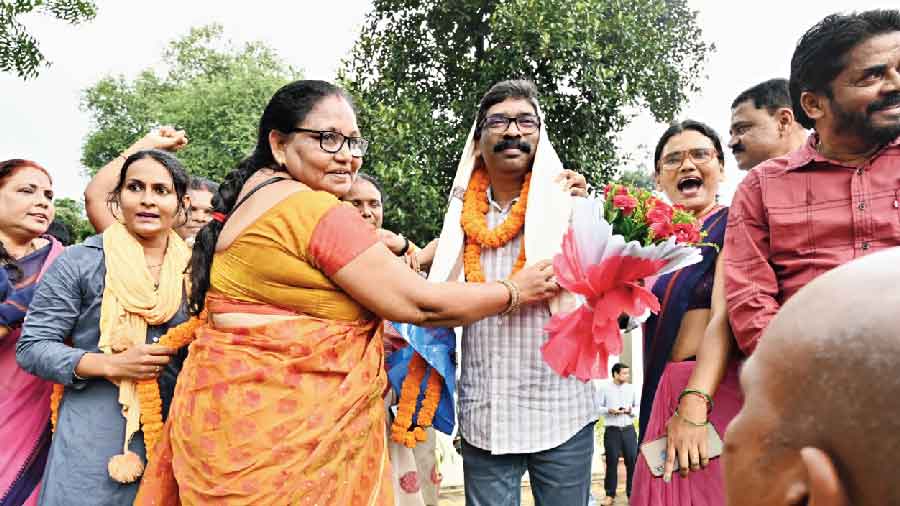 “At this moment, Hemant is among the few Opposition leaders who has proved that the BJP can be outsmarted politically and that too amid the biggest challenge in his relatively short political career. Faced with the threat of disqualification of his Assembly membership, Hemant showed a rare fearlessness and initiated a series of pro-people policies to end long-standing vexed issues. We do not know what will happen in 2024 but, as of now, the JMM has certainly widened its vote base among tribals, moolvasis, government servants, police personnel and Anganwadi workers,” said senior journalist, author and political commentator Anurag Faisal.

Anurag added that Hemant’s manner of handling bickering within the Congress had also changed perception of his leadership skill.

“Hemant’s decision to allot himself a mining lease while holding the chief minister’s chair as well as the mining portfolio was a major blunder, which shows not only his immaturity but also the ineptitude of his advisers who failed to point out the impropriety to him. But the manner in which he handled bickering among the Congress, especially after 3 Congress MLAs were arrested with cash in Bengal, has changed the perception about his leadership skill,” Anurag said.

There have been talks that the Hemant Soren administration coordinating with Mamata Banerjee-led Bengal government on the arrest of 3 Congress MLAs created fear among other Congress MLAs vulnerable to poaching.

“Hemant took the alliance leaders for an outing to Latratu dam near Ranchi to calm their nerves. Later, he moved them out of the state to a resort in neighbouring Chhattisgarh. Hemant’s stealth has taken even the BJP by surprise. The silence of the governor on the opinion of the Election Commission on his purported disqualification and pressure tactics by the chief minister to demand the EC’s opinion has made it clear that Hemant believes in the old adage that attack is the best form of defence,” Anurag added.

Social worker, rights activist and veteran journalist Sudhir Pal said the biggest success of Hemant was his ability to boost delivery system during the pandemic in a state lacking medical infrastructure within two years after forming the government in December 2019.

“The manner in which migrant workers were brought from different parts of the country and abroad (over 10 lakhs) during first and second waves of the pandemic and the effective measure to curb the spread of infection from these returnees in rural pockets is certainly a big achievement of Hemant,” Pal said.

“Faced with corruption charges over illegal mining and with ED raids happening almost daily, Hemant initially showed that he might succumb to the BJP tactics.”

People started talking of power-shift during the inauguration of Deoghar airport on July 12 where he was seen speaking to Prime Minister Narendra Modi. However, he suddenly showed fearlessness and started approving welfare proposals, inaugurating development projects and ending longstanding demands of all sections of people.”

Some of the vexed issues that were addressed by Hemant in a span of few months were the cancellation of the extension of Netarhat Field Firing Range in Latehar-Gumla border, settling of pending demands for regularisation of para teachers and hike in salary, increasing the honorarium of over 60,000 Anganwadi workers and assistants, and restoration of compensatory leave of one month annually to police personnel. He also reintroduced the old pension scheme, benefiting over 1.25 lakh government employees of the state, and passed a resolution in the state Assembly for the inclusion of Sarna code in the decadal census and sent it to the Centre. The Hemant Soren government also approved the 1932 land settlement survey records as the basis for residential certificates for jobs and education purpose and provided 27 per cent reservation for OBCs.

Hemant continued to blame the BJP for the ills of the state on Friday.

“The same party, which is in power in Gujarat, also ruled Jharkhand for a major part since it was carved out of Bihar. Gujarat is so advanced but Jharkhand is among the most backward states. It seems their intention was to loot Jharkhand. However, our party is trying to bring smiles on the faces of the people of Jharkhand and we are committed to the development of the state,” Hemant said while addressing Anganwadi workers who had gathered in Ranchi to honour him for meeting their demands.

BJP national vice-president and former chief minister Raghubar Das said on Friday that the government was trying to hide its failure by initiating pro-people policies.

“The government is trying to hide its failure on all fronts and corruption done through illegal mining by announcing policies like the 1932 land settlement, which has already been quashed by the high court in 2002,” Das told reporters in Ranchi.