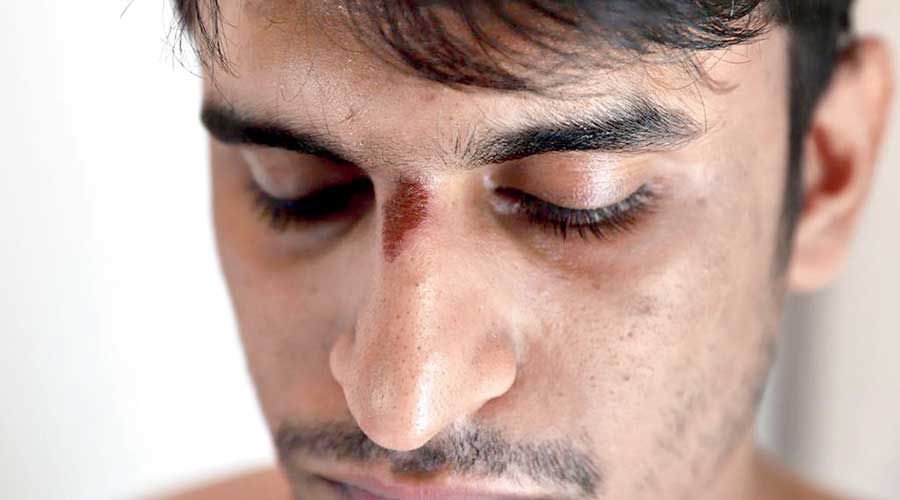 An injured Ahan Penkar. In a complaint to police commissioner S.N. Shrivastava on Saturday, The Caravan magazine reporter Ahan Penkar, 24, wrote that ACP (Model Town) Ajay Kumar kicked and stamped on his face, back, shoulders and ankle after he was picked up while on assignment on Friday.
Picture courtesy: The Caravan
Pheroze L. Vincent   |   New Delhi   |   Published 18.10.20, 02:06 AM

A young journalist covering a protest by students near Delhi University has complained of custodial assault by an assistant commissioner of police and said the cops asked those picked up “aap ko pata nahi hai ki desh badal gaya hai (don’t you know that the country has changed?)”.

“Desh badal gaya hai” is a BJP refrain and “Mera desh badal raha hai (My country is changing)” was a song released by Prime Minister Narendra Modi after completing two years in office in 2016.

In a complaint to police commissioner S.N. Shrivastava on Saturday, The Caravan magazine’s Ahan Penkar, 24, wrote ACP Ajay Kumar kicked and stamped on his face, back, shoulders and ankle after he was picked up while on assignment on Friday.

The Caravan, some of whose journalists have been targeted by the police earlier, had reported extensively on the controversy surrounding the death of Judge B.H. Loya, who was hearing the

Sohrabuddin Sheikh “encounter” case in which BJP leader Amit Shah was an accused, in 2014.

Shah, now the Union home minister, was discharged from the case after Judge Loya passed away and a new judge took over.

On Saturday, Penkar, the journalist, said the police assaulted the protesters with the ACP stamping on the neck of one of the persons.

The journalist said the other cops at Model Town police station had supported Kumar’s actions on the ground that he had been deprived of sleep after night duty because of the protest.

ACP Kumar had been in the news last December after a man resembling him was seen in a widely circulated video ordering students in paying guest accommodations near DU to vacate their rooms because of law-and-order problems amid the protests against the Centre’s citizenship thrusts. The police claimed that the video was fake.

Penkar had been covering a demonstration outside Model Town police station by Left student groups and family members of a 17-year-old domestic help who was found hanging at her employer’s premises on October 4.

The family, who are Dalits, suspects that she had been raped and murdered and has demanded that the police’s crime branch probe the case. The post-mortem report of the girl says she died due to hanging, and the police have denied foul play.

In his complaint, Penkar has written that he was forcibly taken inside the police station by cops along with an aunt of the deceased whom he had been interviewing at the protest spot around 3.15pm.

He wrote: “Despite seeing me hold my press card and despite me repeatedly telling them that I am a journalist, the police took me along with four other persons into a room on the ground floor of the police station and asked all of us to sit on the ground…. ACP Ajay Kumar kicked me in the face first and I fell… to the ground. When I was on the ground, the ACP kicked me on my back and my shoulders. When I sat back up, the ACP made me prostrate with my head nearly on the ground and then hit me on the back again. The ACP also stamped on my ankle.”

The Caravan has released images of Penkar that show injuries to his nose and upper back.

Penkar said in the complaint to the commissioner: “I saw the ACP slap one person twice, then made him lie on the ground and punched him in the liver repeatedly, and then put his foot on the man’s neck.”

The journalist alleged that the police forced him to unlock his phone and deleted all pictures of the demonstration.

“The police also said things like, ‘Aap ko pata nahi hai ki desh badal gaya hai (don’t you know that the country has changed?)’ and told us that the ACP had night duty the previous day and had to come to the station while he was resting and therefore it was natural that he would beat us up because of it,” Penkar has written in his complaint.

A DU student who told this newspaper he was tortured in the same room as Penkar corroborated the journalist’s account of his ordeal described in the complaint. The student said some protesters had also told the police that Penkar was a journalist. “The ACP hit him so badly that he started crying,” the student — who was treated for bruises at a government hospital on Saturday — said. He added that they were allowed to leave around 8.30pm on Friday.

Delhi police said Penkar had been summoned for questioning in connection with his allegations and claimed that he had been “seen protesting” in violation of pandemic-time rules.

The police said in the statement that the post-mortem and the inquest had “conclusively” confirmed that the girl had died by suicide on October 4.

“On 16.10.20, some protesters staged a dharna/ demonstration outside PS Model Town to put undue pressure on the police and tried to give the incident a different colour.… A case has also been registered for the violations under relevant sections of the IPC, Epidemic Act and the DDMA Act,” the statement said.

“One Ahan Penkar, who was also seen protesting amongst the crowd of protesters, was also detained and subsequently released. He later claimed himself to be a press person and alleged misbehaviour. The police have issued notice to him for his statement and interrogation in the matter,” it added.

In August, three journalists of The Caravan  had been roughed up by a mob in Northeast Delhi where they had gone to investigate reports of communal tension in the area, which had witnessed riots in February in which 53 people were killed.

Back then, the police had said in a statement: “Today afternoon some journalists were taking photographs and interviews in the communally sensitive area to which local people objected. The police acted swiftly to pacify the situation.”

In 2016, during a protest outside the Delhi office of the Rashtriya Swayamsevak Sangh against student Rohith Vemula’s suicide, Rahul Meesaraganda, a photographer freelancing for the magazine, had been chased and caned by the police, and his camera smashed.

Cop to journalist: Why criticise govt?