Won’t yield even an inch on Ayodhya: Amit Shah 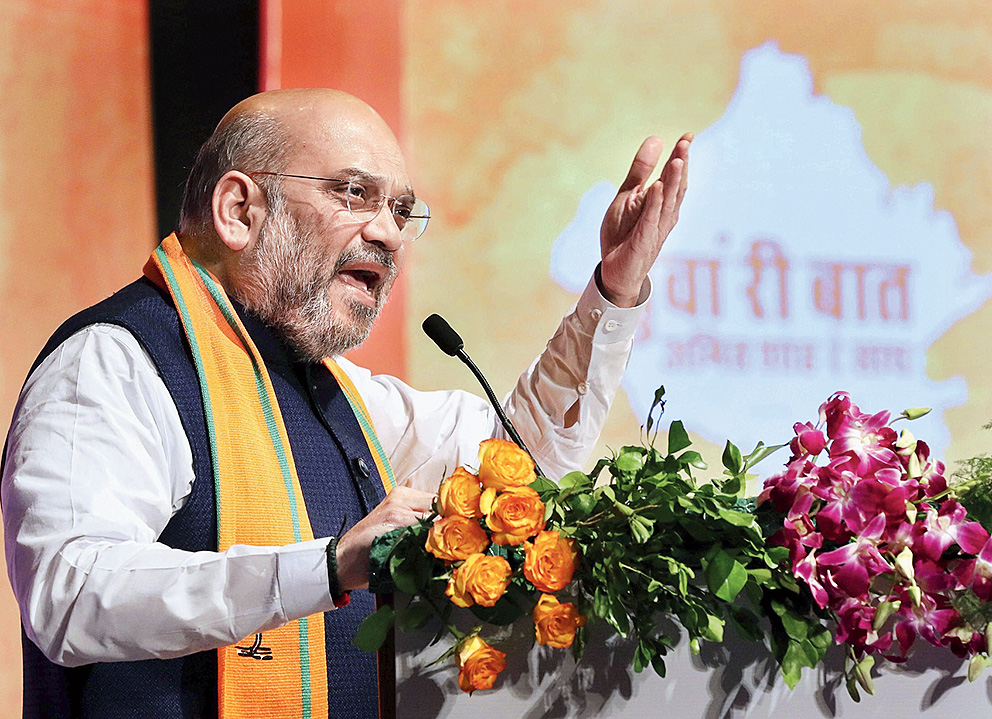 Call for Ayodhya law as SC won’t be rushed

BJP president Amit Shah has said there is “no question of going back even an inch” on the commitment to build a Ram temple on the disputed site.

The chief of the ruling party at the Centre has made the statement at a time the Ayodhya case is pending in the Supreme Court. Although Shah said his party was confident of an early judicial resolution, his unequivocal assertion raises questions on the BJP’s response should the verdict go against its wishes.

“Let me clarify. The BJP is committed to the construction of a grand Ram temple in Ayodhya at the very place where Ramlala (infant Ram) currently resides. This is a promise to the people of the country and there is no question of going back even by an inch,” Shah said while interacting with youths in party-ruled Rajasthan, which votes on December 7.

A makeshift Ramlala temple now stands on the disputed plot where the Babri Mosque once stood.

Shah had been asked what the BJP was planning to do now that the court had deferred the hearing to January. “Isme ek inch bhi waapis aane ka sawal nahi hai,” he said to chants of “Jai Shri Ram”.

The BJP president went on to say that since the case was pending in the Supreme Court, his party wants a “judicial resolution” of the dispute.

“But the case is pending in the Supreme Court…. The BJP’s manifesto (of 2014) says that we want a judicial resolution of the case. The next date of hearing is in January and I am confident a decision will come at the earliest.”

Last month, the Supreme Court, while responding to a plea from the Uttar Pradesh government to hear the case immediately after Diwali, had said the matter would be listed in the first week of January, “not for hearing but for fixing a date for the hearing”.

“The hearing may be held in January, February, March or April. It will come up before an appropriate bench,” the court had said.

After talking about a judicial resolution, Shah again stressed: “The BJP will not go back even by an inch on its promise. A grand Ram temple, according to the plan, should be built at the place where Ramlala resides and there should be no confusion about this.”

The BJP president sought to project the Congress as a party opposed to the construction of a Ram temple. He pointed out how Congress leader Kapil Sibal had petitioned the Supreme Court for deferring a judgment till after the 2019 Lok Sabha elections.

Shah was in Rajasthan to campaign for the party in next month’s Assembly elections and his assertion to not “yield even an inch” appeared to be a message that an adverse judgment in the Ram Janmabhoomi-Babri Masjid dispute might not be acceptable to his party.

The BJP leader, however, sidestepped the demand for bringing in a law or an ordinance to pave the way for the construction of a Ram temple.

The Rashtriya Swayamsevak Sangh, the BJP’s ideological mentor, and several parivar affiliates have been calling for an ordinance to circumvent the court.

The Supreme Court is hearing an appeal against the judgment that a Lucknow bench of Allahabad High Court had passed in 2010 in the title dispute.