Shoulder to shoulder, for equality 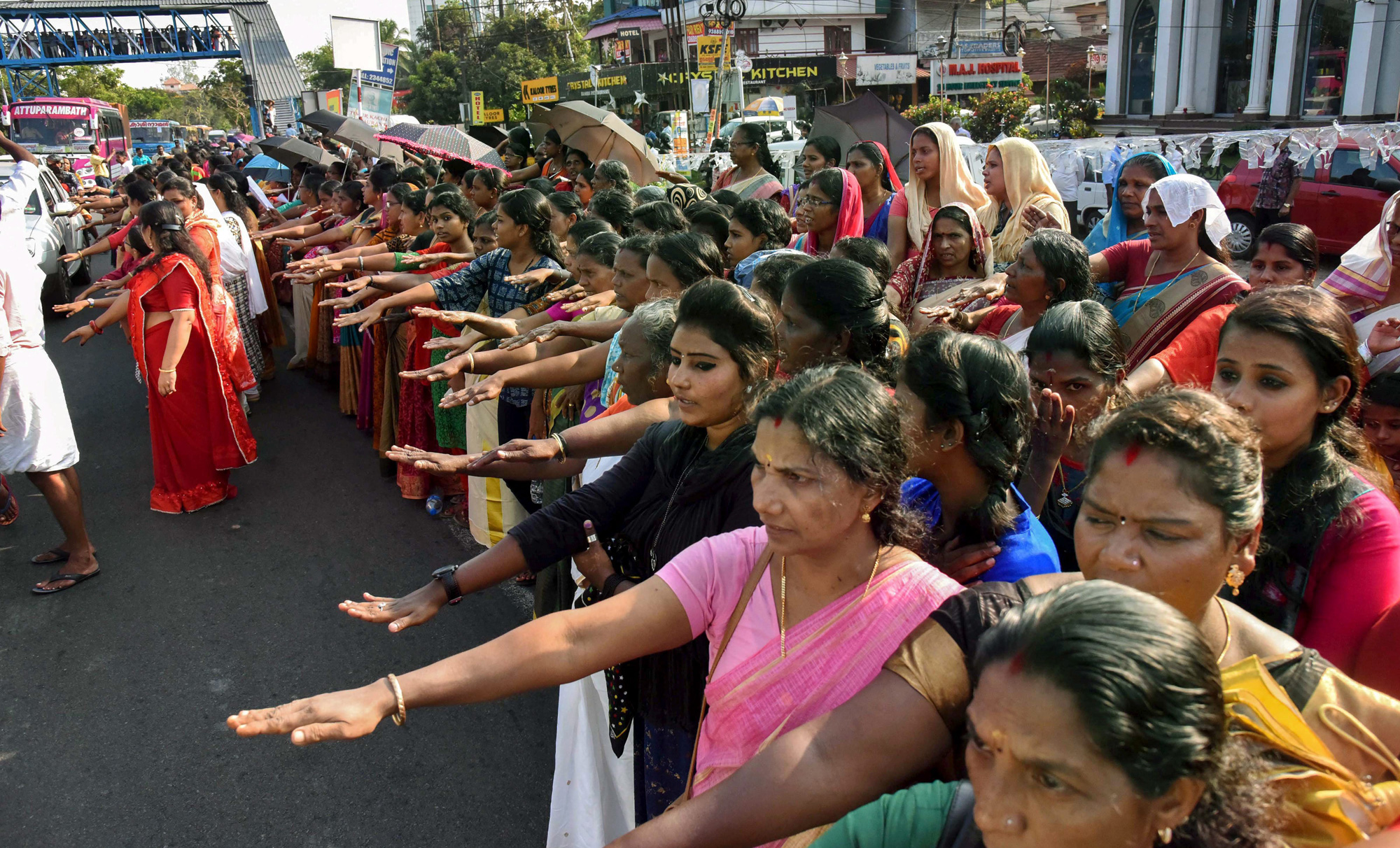 Arm’s length became shoulder to shoulder as millions of women stood together along the spine of Kerala, seeking to build a wall against regressive forces and braving at least one instance of pepper-powder ambush, in an unparalleled expression of solidarity for social renaissance and gender equality.

The Vanitha Mathil (Women’s Wall), organised by the ruling Left parties and around 170 organisations, took shape around 4pm and snaked 620km from Kasargod in the north to state capital Thiruvananthapuram in the south.

The wall was formed by over 50 lakh women at a time the state is in the grip of a tussle over the Supreme Court verdict that lifted the ban on women of childbearing age from entering the Sabarimala temple.

The CPM-led government has publicly vowed to implement the court order while the BJP and the Congress have been insisting on upholding tradition. Sangh parivar sympathisers, who describe themselves as “devotees”, have positioned themselves on the hilly terrain leading to the temple and have foiled all the attempts made so far by women of childbearing age to enter the temple.

The wall came up against the backdrop of the temple standoff but the government led by chief minister Pinarayi Vijayan had consciously avoided directly linking the two in order to guard against polarisation. The initiative was pitched as a movement for social renaissance, which includes women’s rights.

The need for such a wall was reinforced by the vile response of a group of suspected Sangh parivar supporters. They attacked hundreds of women who had lined up at Chettakundu in Kasargod in an attempt to break the wall.

Kasargod district CPM secretary M.V. Balakrishnan told The Telegraph that a large number of men had assembled at the spot, a BJP pocket borough, when the wall was being formed on the national highway that runs along a railway track.

The miscreants had sprinkled chilly powder on the dry shrubs between the highway and the railway track. They set fire to the shrubs to disrupt the women.

“The women who had gathered at that location were caught up in the dense smoke and choked because of the presence of chilly powder. Four of them were injured when the RSS activists pelted stones to break the wall,” said Balakrishnan.

However, the women braved the attack and stood their ground, he added.

A few more incidents of stoning occurred in parts of neighbouring Kannur, a CPM stronghold, where alleged Sangh elements were out to disrupt the wall.

The women were originally supposed to stand at arm’s length holding each other’s hand. But the sheer number of participants resulted in a tightly knit wall with women standing shoulder to shoulder. Almost all urban centres witnessed six to eight layers of participants.

CPM leader Subhashini Ali said at Kochi: “Today, we were supposed to stand holding hands. But so many people have come that if we had stood holding hands, the wall would have stretched to the Arabian Sea.”

Lakhs of men who expressed solidarity with the women stood on the opposite side of the road at several locations, effectively forming a second wall but not as unbroken as that erected by the women.

While the actual wall was to take shape at 4pm and last 15 minutes, the women stood in the same formation for about an hour.

The presence of a large number of Muslim women dressed in traditional attire was remarkable since many Muslim organisations and parties like the Indian Union Muslim League, which is part of the Congress-led United Democratic Front, had discouraged them from taking part in the wall.

Women from the Christian community were also present in large numbers, especially in the southern districts. The Jacobite Syrian Church had asked women to participate in the wall.

The Sree Narayana Dharma Paripala Yogam of the backward Ezhava community and the Kerala Pulayar Maha Sabha, of the Dalit community, were at the forefront of Hindu community organisations that supported the event.

CPM leader Brinda Karat, who was part of the wall in Thiruvananthapuram, said: “My dear sisters, you have made history today by building a wall of resistance against the dark forces that want to push us women back into the dark ages.”

“Kerala, you have moved ahead not only for the women of Kerala, but this message of the wall is for all women of India,” Karat added.

Recently, lakhs of devotees had lit Ayyappa Jyothi (sacred lamp) and lined up across the state in support of the traditions in Sabarimala. Lord Ayyappa is the deity of the temple.