Women faint in the face of protests at Sabarimala 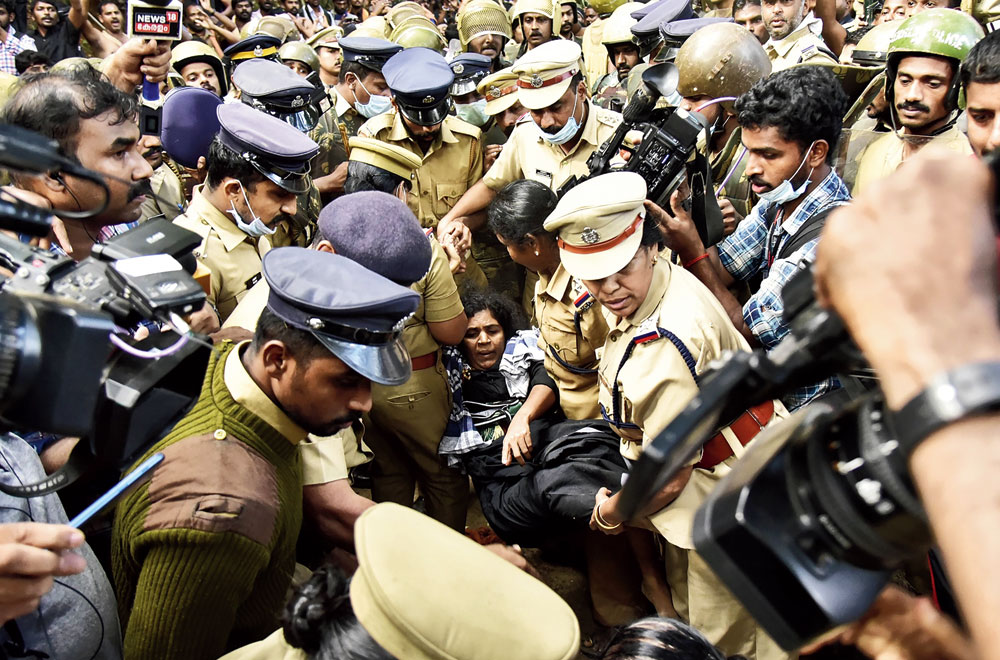 Two women devotees of childbearing age made a determined push towards the Sabarimala temple on Monday before heckling protesters and fatigue at trying to get past the swelling mob forced them to cut short their bid and accept the police offer of an ambulance.

The two pilgrims from Kerala — Bindu, 42, and Kanakadurga, 44 — came nearly within a kilometre of the temple to Ayyappan before turning back.

That was around 4km more than what a group of 11 from Chennai had managed to trek on Sunday before they were thwarted by a group of “devotees” and Sangh parivar activists who charged at them.

Sunday’s attempts were the first entry bids by young women since the main pilgrimage season opened on November 16. Crowds of protesters had foiled similar attempts in October after the Supreme Court overturned a centuries-old temple ban on women between 10 and 50.

Bindu, from Kozhikode, and Kanakadurga, from Malappuram district, had arrived at the Pamba base camp — 5km downhill from the hill shrine where Sunday’s group had reached — around 5.30am without informing the police. They refused police assistance and began their trek after an hour.

Ten policemen, some in riot gear, however, joined the two when a handful of “devotees” tried to stop them after a short distance. The number of police personnel later rose to about 50.

Once the women went past Marakoottam along the route, around 9.30am, the number of protesters grew. Hundreds of men climbed down the hill, blocking the cement path.

That led to an almost 90-minute wait at the spot with the protesters jostling with the police who swung their batons to keep the mob away.

The women refused to budge when the policemen tried to dissuade them from pressing ahead. “No one can stop us from visiting the temple. We don’t mind waiting here for however long we have to,” Kanakadurga told reporters accompanying the women.

But a tired Kanakadurga fainted as the wait got longer. She was immediately stretchered off to a primary health centre in Marakoottam.

Bindu said she was determined to visit the temple and squatted on the way as hundreds of protesters booed and heckled her.

After a while she too showed signs of fatigue, forcing the police to call for an emergency rescue vehicle of the forest department. The vehicle then picked Kanakadurga from the health centre and rushed to Pamba.

The two women being escorted by the police after protests broke out.
(PTI)

The women were taken to Kottayam Medical College Hospital, 45km away. Sangh parivar activists, who had gathered outside the hospital, threw rotten eggs as the ambulance arrived. Five of them were rounded up.

The ruckus over Monday’s attempt led to a long queue of vehicles carrying devotees at the Nilakkal base camp, 23km from the temple, but there was little impact inside the shrine.

The pilgrimage season that started on November 16 is set to conclude on Thursday. The temple would reopen on Sunday and close again on January 14.

The president of the Travancore Devaswom Board, the government body that manages the Sabarimala temple among other Kerala shrines, said he suspected a “conspiracy” in the repeated attempts by women of childbearing age to visit the shrine.

“I feel this is part of some conspiracy,” he told a Malayalam channel. “Each attempt (of women) is being faced with strong protests by male devotees. So when someone attempts to enter the temple knowing the situation, I suspect they are doing this to foment trouble.”

Asked who would benefit from creating trouble at a temple, he just said: “There are those who think they will benefit from such situations.”

State minister E.P. Jayarajan said the protesters were “behaving like the Taliban, but the government will not buckle under any of their tactics”.

Ammini, a tribal activist from Wayanad who had backed down on Sunday from her solo attempt to reach the shrine, met Kottayam’s police superintendent on Monday.

The officer agreed to her demand for security for another bid but Ammini did not disclose when she was planning her next attempt.