Women beat back cops with anthem 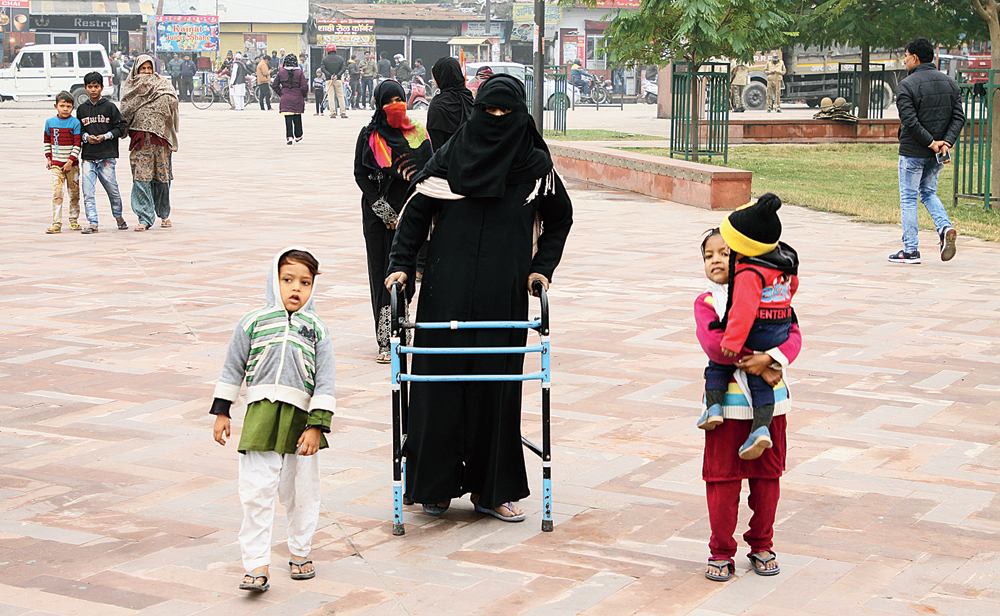 Women arrive with their children to participate in a protest against the CAA and the NRC at the Ghanta Ghar in Lucknow on Saturday
Picture by Naeem Ansari
Piyush Srivastava   |   Lucknow   |   Published 18.01.20, 09:51 PM

The size of the anti-citizenship-act dharna in the heart of Lucknow — pitting “patriotic women against anti-national elements” — kept growing overnight, intent on making the government “feel like pygmies”. 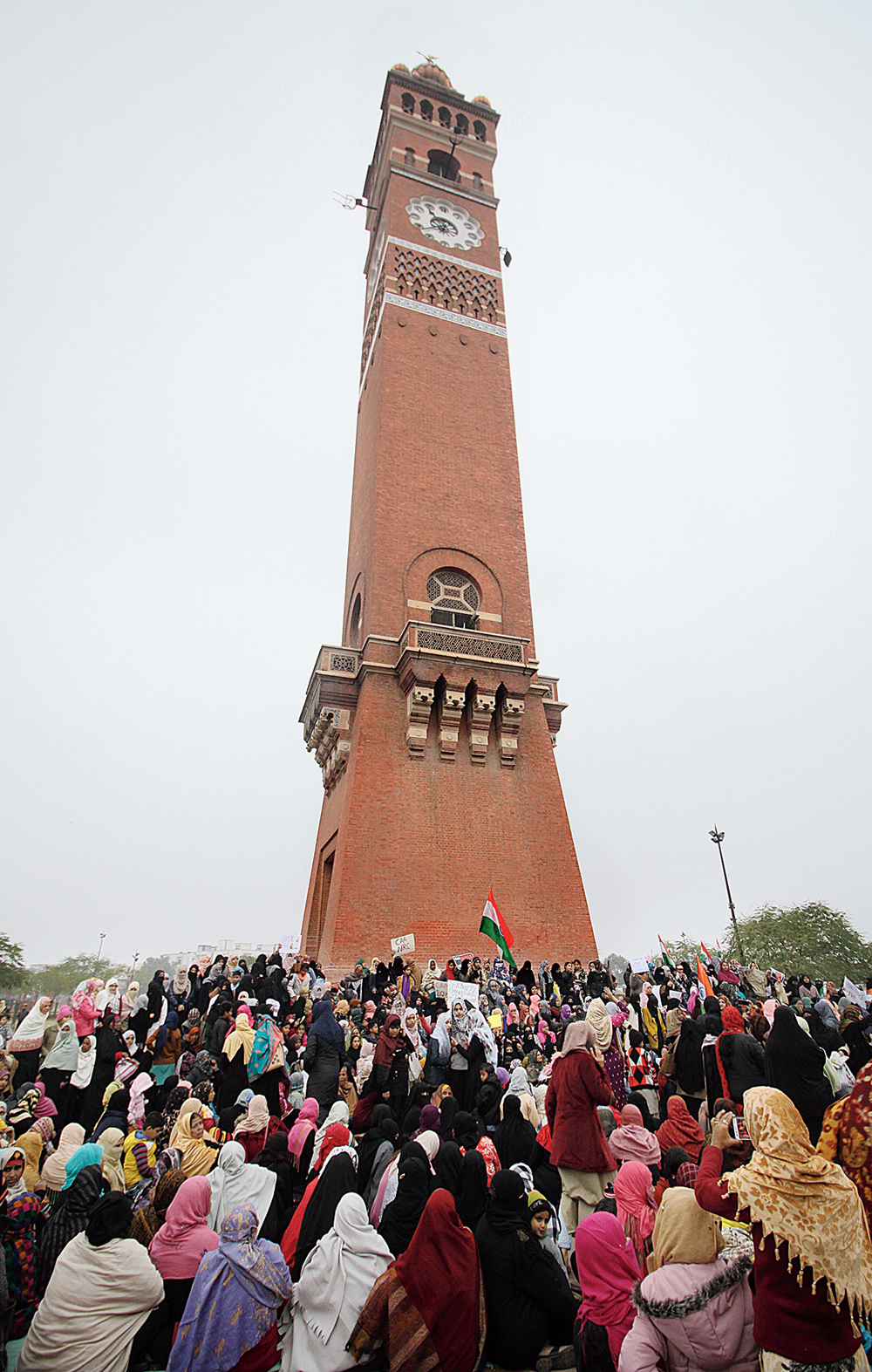 A hint of a scare had arrived early on Saturday morning with large police and Rapid Action Force teams gathering around 7am near the protest site, the Ghanta Ghar clock tower in Husainabad, 1.5km from the seat of power.

But the women, many of them still sleepy after spending the winter night in the open, were quick to act. They rushed from the paved courtyard up the steps of the 220ft-tall structure and began singing the national anthem. 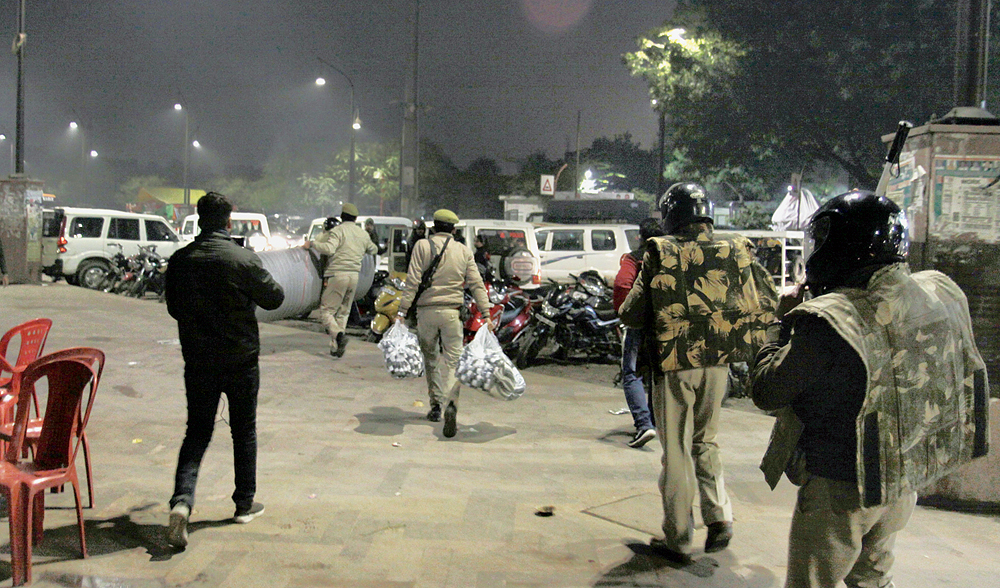 Policemen, who held a march around the Ghanta Ghar in Lucknow on Saturday evening, walk away with blankets, mattresses and other material that volunteers had brought for the women and children protesters
Picture by Naeem Ansari

Outwitted, the force retreated and the women turned jubilant. “Police bula lo, nahin darenge (Call the police, we aren’t afraid),” one of them cried.

As the hours passed, however, the police tried to turn the screws on the protesters little by little. They first blocked their male relatives’ entry and then, around 9pm, carried away a folded tent and a pile of 60 spare blankets and four mattresses that the women had kept aside for the cold night. They also took away 40 large packs of biscuits and 40 one-litre bottles of water.

Earlier in the morning, Sabiha Khatun, a protester in her early 50s, had proudly described how “some of the women went home around 5am but many more joined in”.

“We know that the (Narendra) Modi and Yogi Adityanath governments hate us women because we have faith in democracy. But we don’t hate them because our democracy is full of humanism,” she said.

“We only hate their ideology, which doesn’t behove humans. We are here to make them feel like pygmies before us, the people of India.”

Twenty-something student Pooja Shukla had joined the protest late on Friday night. “We are keeping an eye out to prevent criminals from infiltrating the protest. They can sabotage this movement, organised by patriotic women against anti-national elements,” she said.

Pooja added: “The women are prepared to sit here for weeks, months and years till the new citizenship act is withdrawn.” 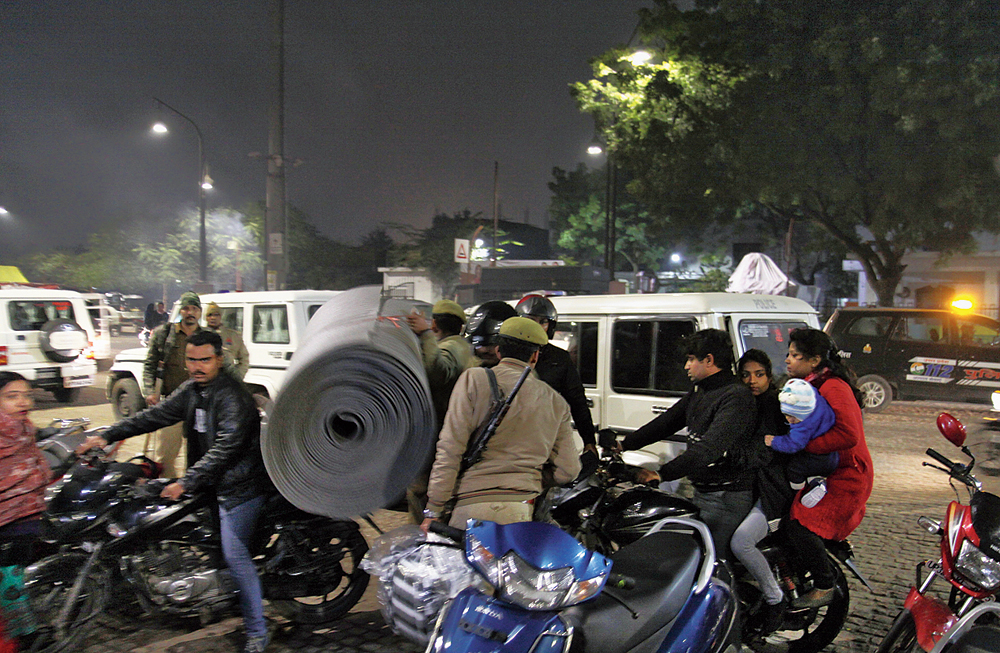 Pooja said the protesters were receiving messages of support from across the country on their mobile phones.

“Unknown people are sending tea, breakfast, bed sheets, mattresses and quilts. Someone erected a small canopy last night (that didn’t cover all the protesters). Now they are going to raise a larger shamiana,” she said.

Till 9am, the police and RAF constables had kept their distance but blockaded the protest site at 10.30am against outsiders, mostly men from the women’s families who had been keeping vigil from nearby and supplying food and water.

However, the forces allowed the women and children to leave or enter as they wanted, keeping the supply lines open.

A middle-aged Shanu Bano said around noon that the male family members were still watching from behind the police ring.

“You can see they are standing in groups around the clock tower compound. Our children are playing cricket in a corner,” she said.

Around 7pm, Sabiha told this newspaper: “The police are not allowing the men to bring in food or tea. They beat up two men who were bringing food.”

By 9pm, the site had been cordoned off with ropes and the spare blankets taken away. The protesters were planning to keep warm by lighting a fire with wood procured during the day.

Early in the evening, an officer had attributed the police’s restraint till then to the absence of chief minister Yogi Adityanath and state police chief O.P. Singh from their offices.

He said Singh, who had personally monitored the caning and tear-gassing of the protesters in Lucknow on December 19, had been at the inauguration of an apparel showroom till Saturday afternoon. The venue was in Hazratganj, about 4km from the clock tower.

Adityanath was in Varanasi, attending a BJP event.