'The govt is conspiring to subvert our movement' 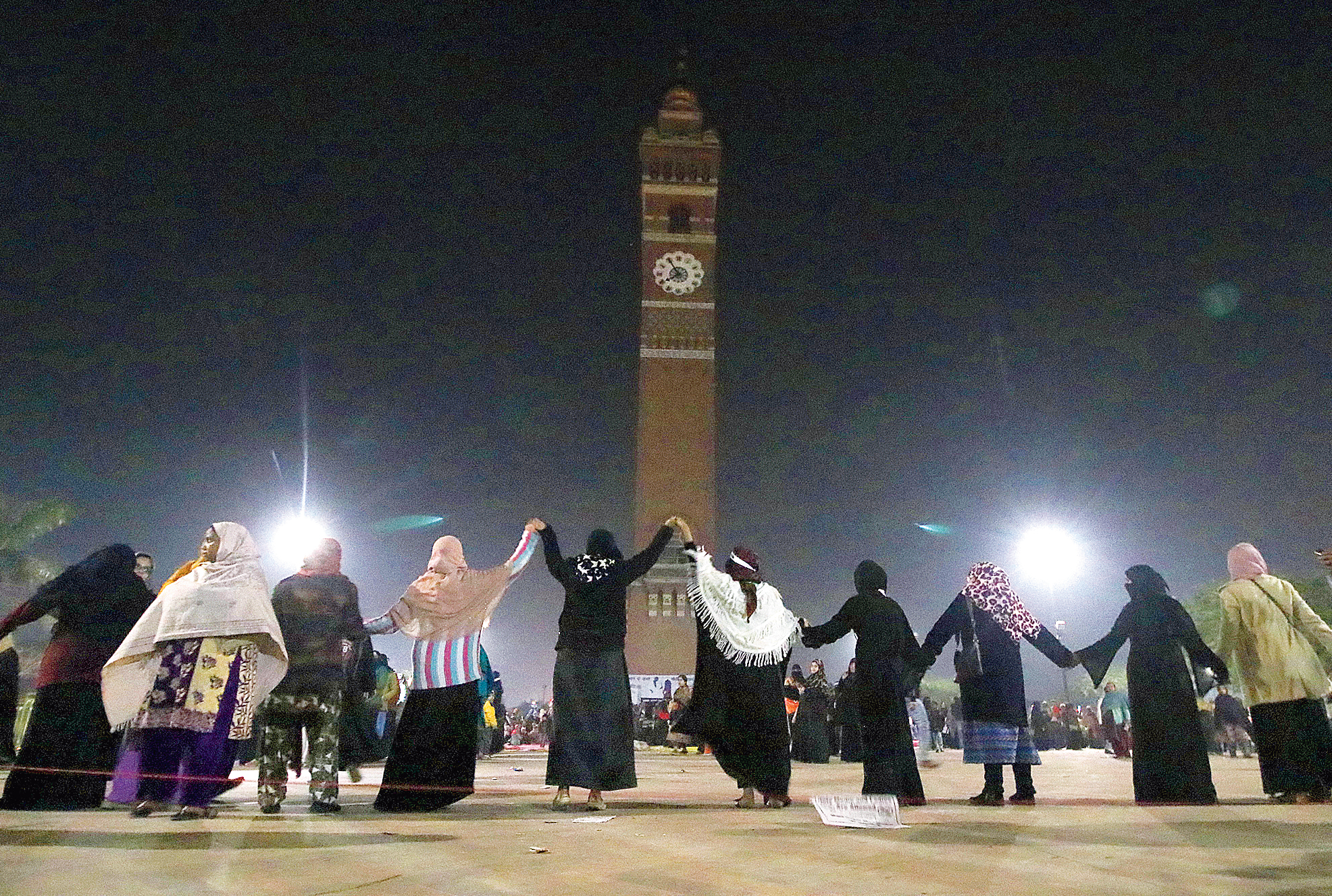 ● Uttar Pradesh chief minister Yogi Adityanath’s social media team sneaked into the protest through Sunday morning and afternoon, scouring for anything that could be used against the women and children.

● A young woman rushed in late in the afternoon and screamed “Pakistan zindabad”.

But the women protesting the new citizenship regime at Lucknow’s landmark Ghanta Ghar since Friday night were holding out late into Sunday night. From 400 women and children on Saturday night their number had catapulted twelve-fold to 5,000 on Sunday evening.

● The women offered fresh blankets and biscuits to the same policemen who they say had snatched their stocks the previous night, leaving them “shamefaced”.

● They kept identifying the members of the chief minister’s media cell and asking them to leave.

● They grabbed the pro-Pakistan sloganeer and handed her over to the police.

The police, who deny snatching the women’s blankets and food, kept their distance on Sunday, neither blockading nor interfering with the protest.

All the vigil came from the women themselves, ever alert against possible saboteurs. Having removed the police’s rope cordon in the morning, they had themselves ringed the protest site with a thinner rope in the evening. Inside was another ring, of women.

Since early afternoon, several hundred women had formed a rectangular “human chain” around the protest site — the clock tower and its front courtyard, the size of a football ground — while the rest sat inside on the paved surface or on the steps of the 220ft-tall structure.

“We are appealing to the men to stay away from the steps and the courtyard, where the women and children are sitting, since that will give the police a chance to send plainclothesmen to sabotage our protest and give us a bad name,” said Kahkashan Parveen, a woman in her mid-40s.

“The government is conspiring to subvert our movement. A mystery girl was sent and she chanted ‘Pakistan zindabad’. We quickly handed her over to the cops, who let her go,” Sanno Khalid, a protester in her 40s, said.

“Some government agents, including the police and those who handle the chief minister’s Twitter and Facebook accounts, have been spreading the canard by mouth that we are being paid Rs 5 to protest. Let me tell them ‘we are fighting against the cheapest people on earth; we know how low they can stoop’.”

Earlier, about a half-dozen women had gone to a nearby market with money pooled from the protesters as soon as the shops opened at 11am. They brought back 500 blankets, 100 40ftx5ft mats, 1,000 packs of biscuits, 6,000 bananas and 1,500 water bottles, ferried in rickshaws.

Some of these were offered to the policemen. “I offered a blanket and a pack of biscuits to the same policeman who had pushed me aside last night and snatched two blankets from my hand,” thirty-something Razia Sultan told The Telegraph.

“An inspector who had stolen our biscuits from a chair 10 feet from us, while we were busy chanting slogans, began laughing when he saw me offer the blanket and biscuits to the constable. I asked him to stop laughing, snatching and stealing — and feel free to ask for whatever they needed to keep their vigil on us.”

She added: “The inspector was visibly ashamed. He said he had only followed orders. He told me that he and his colleagues acted like policemen when their bosses asked them to, and turned into snatchers and thieves when the orders changed.”

While the women’s male family members had stood outside and watched till Saturday night, many of them entered the courtyard on Sunday morning to help them spread the mats and distribute the food packs. But they left by noon.

“It’s obvious our numbers are growing. This number may fall on Monday but we hope at least 1,500 women and children will always be here,” Parveen said.

Marina Begum, 55, said she was a diabetic but had forgotten to take her medicine on Saturday morning. “I resumed taking medicines from evening. I’m here to fight against a bigger disease.”

The men continued their vigil from the streets. Zakir Hussain, a young man who was spreading the mats brought by the women close to noon, said: “The police pushed our women aside last night. We can’t sit at home if that happens. If the police want to attack them, they would have to attack us first.”

Some men did enter through the day, though. A member of the chief minister’s social media cell said on the condition of anonymity: “We were there to do a job and returned after doing it.”

He acknowledged the media cell members — mostly former journalists — had been tasked to monitor the slogans, shoot videos and pick up anything that could help portray the protesters as “anti-national”.

After a lone cell member arrived and was recognised by a protester who is a former journalist, two more batches of two and six members came and were identified. Sources said a fourth batch, recently arrived from Delhi, had been sent to avoid identification.

Asked about the women’s allegations about the police snatching their food, water and blankets on Saturday night, Pramod Kumar Mishra, the local station house officer, said: “We don’t care about such accusations.”

He added: “This is an important tourist spot and we are supposed to ensure that visitors who come from across the world don’t return with any unpleasant feeling. We are, however, not interfering in the protest by the women and children.”

He denied any conspiracy to malign the protesters.

Vikas Chandra Tripathi, additional deputy commissioner of police (Lucknow West), tweeted in Hindi: “Some organisations were distributing blankets during the illegal dharna at Ghanta Ghar. People from adjoining areas who were not participating in the dharna too were coming to take the blankets. The police removed the blankets and the members of those organisations and took legal action. Please don’t spread rumours.”

A 27-second video has surfaced on social media purportedly showing a policeman carrying blankets and sheets in a plastic bag, PTI reported.

A woman, the agency said, can be seen shouting at him and calling him a “thief”, but the man does not respond.

Adityanath, who was in Gorakhpur, avoided a direct comment after being told the number of protesters was swelling.

“Those opposing the CAA are trying to disturb the harmony in the country,” he said, adding that the Congress and the Samajwadi Party were “funding” the agitation.

“So we don’t expect anything better from our present rulers but we hope our protest will wake up our countrymen.”