With temporary tattoos they earned safe passage as police stood by 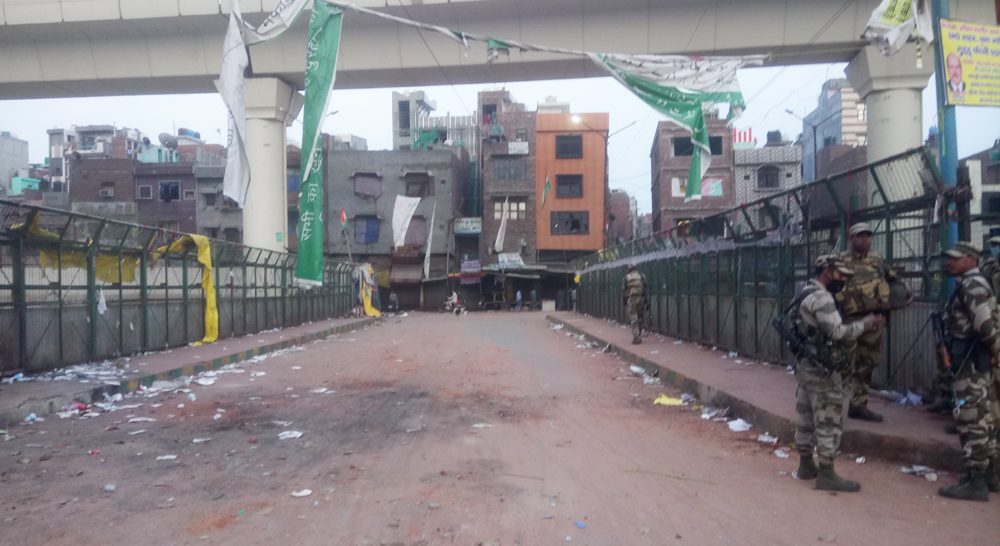 They came prepared, some were even armed; and earned safe passage in a heavily policed area by virtue of make-do tattoos they had drawn on their necks and arms: “RSS”. “Sanghi”.

Almost a week after the violence at Kardampuri in northeast Delhi, one of the many sites of anti-CAA protests, a local resident of Shahadra admitted he was still trying to come to terms with what they experienced.

“There was no way locals could have come up with so many guns in such a short time. The crowd comprised outsiders, brought from nearby UP for a specific task. Locals only provided support by guiding the men through lanes, providing them food and shelter,” the man, who had witnessed the violence at Maujpur since Sunday, told The Telegraph Online.

The Maujpur “red light crossing” is about 200 metre from Kardampuri in northeast Delhi, that was till days ago a thriving gathering of women who had mounted a symbolic resistance against the Act they claimed was designed to take away their nationality.

“Those who had gathered there had temporary tattoos of ‘RSS’ or ‘Sanghi’ stamped either on their arm or neck. They used them (tattoos) as a free pass to get cover from the security forces deployed in the area,” the man claimed, adding that it was more or less the same group that wreaked havoc in the area for the next three days.

At the entrance to Kardampuri is a board which used to have a photo of Ambedkar. It is now reduced to tatters. An anti-CAA banner lies torn. Kardampur and adjacent Kabir Nagar, both Muslim-majority areas, were the first colonies which bore the brunt of rioting that began almost immediately after an incendiary speech of BJP leader Kapil Mishra on Sunday.

Local residents said on Friday that the crowd that had gathered at the Maujpur crossing to listen to Mishra began pelting stones at their homes the moment he finished speaking.

“We got the first taste of the riot just after Mishra left. People started throwing stones at our building from the road. Surprisingly, they were not stopped by police,” a resident of nearby Kabir Nagar said.

The violence escalated into a full-fledged riot in the coming days. The death toll as on Saturday was 42.

Muslim residents of Kardampuri blamed Mishra’s speech as the immediate trigger for the violence. They said the accusation that their anti-CAA protest was blocking the road was a ruse to attack them.

The Kardampuri protest was being observed away from the main road, as were most of the other anti-CAA protests at Khureji, Mustafabad and Khajoori Khas. It was only at Jaffarabad, however, that women had been sitting in under the local metro station, and had blocked one side of the road.

Another resident, who has been part of anti-CAA protests at Seelampur from the start, said a group calling itself, “Pinjra Tod” was the prime mover. Its members convinced the women to block the road. And that apparently laid the groundwork for the violence.

“There was no original plan to block the road and sit under the metro station. But the protesting women were talked into it by girls of Pinjra Tod. They wanted to appropriate the agitation which was being run peacefully, for their own gains,” alleged Nihal Ashraf, a Jamia Milia Islamia student and resident of Seelampur.

As of now, none of the 10-12 anti-CAA protests that were being held at several locations across the area exists. But residents of Kardampuri said they would resume their demonstration once Section 144 was lifted.

But people are apprehensive. They fear another outbreak of violence any day. “It all seems calm now. But this peace is very fragile. If rioting begins again, it wont stop easily,” said a worried resident.