Advertisement
Home / India / 'Wish instead of throwing stones at us, they were firing. Then I could do what I...'

'Wish instead of throwing stones at us, they were firing. Then I could do what I...'

India's army faces a "dirty war" in Jammu and Kashmir that has to be fought through "innovation", the army chief has said, defending the use of a Kashmiri as a human shield by an officer. 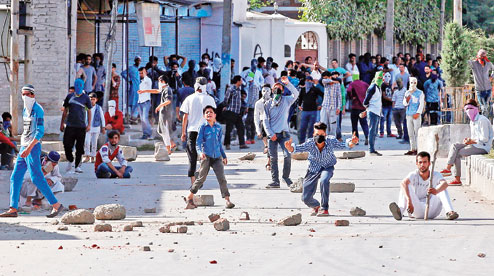 ARMY CHIEF CALLS IT A DIRTY WAR, DEFENDS USE OF HUMAN SHIELD

New Delhi, May 28 (PTI): India's army faces a "dirty war" in Jammu and Kashmir that has to be fought through "innovation", the army chief has said, defending the use of a Kashmiri as a human shield by an officer.

General Bipin Rawat said the main reason the army honoured Major Leetul Gogoi while a court of inquiry was probing the incident was to boost the morale of its young officers, who were operating in a very difficult environment in the militancy-hit state.

He said the people of a country - like its enemies -should be "afraid" of its army and wished the protesters in Kashmir "fired weapons" rather than stones at the forces, because he could then have retaliated the way he wanted.

"This is a proxy war, and proxy war is a dirty war. It is played in a dirty way. The rules of engagement are there when the adversary comes face to face and fights with you," Rawat said.

Rights activists, Kashmiri groups and several retired generals have criticised the army chief's award of a commendation to Gogoi, who had tied a man to a jeep and used him as a human shield against stone throwers. A video of the incident had triggered a social media uproar.

Gogoi, however, has claimed his action was necessary to save polling officials and paramilitary jawans from a huge mob of stone and firebomb throwers during last month's Srinagar parliamentary by-election.

Rawat said: "People are throwing stones at us; people are throwing petrol bombs at us. If my men ask me, 'What do we do?', should I say, 'Just wait and die, I will come with a nice coffin with a national flag and I will send your bodies home with honour?'

"Is it what I am supposed to tell them as chief? I have to maintain the morale of my troops who are operating there."

He added: "In fact, I wish these people, instead of throwing stones at us, were firing weapons at us. Then I would have been happy. Then I could do what I (wanted to do)."

Rawat, who has served extensively in Jammu and Kashmir, said a country was doomed if its people lost the fear of the army.

The general, however, insisted that his force was exercising the highest possible restraint while handling the situation in the Valley.

Rawat said he had a broad idea about what was going on in the court of inquiry, and that was why he had gone ahead and awarded Gogoi.

"I know what is happening in the COI. It is being finalised. What do we punish him for?"

He said the armed forces had the right of self-defence and Gogoi could have chosen to fire at the crowd but did not.

Rawat said that as army chief, it was his duty to lift the morale of his force in Jammu and Kashmir, and that he had done it by awarding Gogoi.

"As army chief my concern is the morale of the army. That is my job. I am far away from the battlefield. I cannot influence the situation there. I can only tell the boys that I am with you," he said.

"I always tell my people: things will go wrong, but if things have gone wrong and you did not have mala fide intent, I am there."

Rawat wondered why not much noise was made when militants kidnapped and killed a young army officer, Lt Umar Fayaz, who was home on leave.

He said there was a ploy to break the trust between the various security forces, and that Gogoi could not have refused when a paramilitary officer had sought security assistance for his personnel and polling agents.

"Tomorrow (in the near future), elections have to be held in Anantnag and similar things may happen. If the army does not respond to a call for assistance, then the trust between the people whom we are protecting, (between the) police and (the) army, will break," he said.

"That is something I cannot allow to happen. This is what the militants want. It can create a divide between the army and other security forces."

Farooq Dar, who was tied to the jeep, says he was not a stone thrower and was returning home after casting his vote when he was hauled away.

He says he still suffers from physical and mental trauma after being paraded through villages while being strapped to the jeep's bonnet, with a sign slung around his neck warning stone throwers with consequences.

Rawat said that just four districts in south Kashmir were disturbed and that it was incorrect to say the entire valley had gone out of control.

Asked about the possible solution, he said: "It will have to be a composite solution. Everybody will have to get involved. The army's role is to ensure that violence does not take place and the common man who is not indulging in this (violence) is protected."

Asked whether there should be a political initiative to reach out to the Kashmiri people, the army chief said it was for the government to decide.

"Has political initiative not been taken in the past? What was the result? You had Kargil," he added.

To another question, he said he did not anticipate a "limited war" with Pakistan.