Will not mislead people on Article 370 restoration: Ghulam Nabi Azad at Kashmir rally 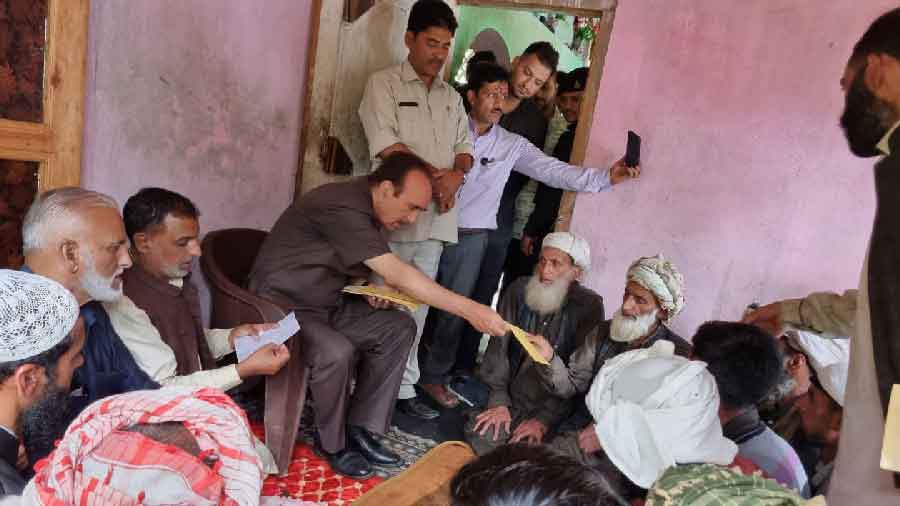 As he prepares to launch his political party, former Congress leader Ghulam Nabi Azad on Sunday slammed those promising the restoration of Article 370 even though it was not in their hands and said he would not mislead the people over the issue.

In his maiden rally in Kashmir Valley after quitting the Congress last month, he said only a government with a two-thirds majority in Parliament can ensure the restoration of the special status of Jammu and Kashmir.

"Azad knows what can and cannot be done. I or the Congress party or the regional parties cannot give you back Article 370, neither can (TMC chief) Mamata Banerjee, or DMK or (NCP chief) Sharad Pawar," the former chief minister of Jammu and Kashmir said.

The former Union minister said he would not raise issues over which he has no control.

"Some people have been saying that I don't talk about Article 370. I want to tell them that Azad does not befool people for electoral gains," he said at the public meeting at Dak Bungalow Baramulla in north Kashmir.

"I swear before God that I will not mislead you. I will not raise such slogans or issues over which I have no control," he said.

Azad said only a party with a two-thirds majority in Parliament can restore the special status of the erstwhile state which was revoked by the Centre in August 2019.

"Congress party hasn't been able to achieve more than 50 Lok Sabha seats in the last ten years. Let God help them. But, I have been in politics, and I don't think the Congress party can get over 350 seats in my lifetime. Its strength is decreasing in Rajya Sabha with every state loss," he said.

"Where from can I get it? Where can I get those votes needed in Lok Sabha or Rajya Sabha? Why mislead people? So, tell me who is lying? Me, or they?" he added.

Azad said it is another betrayal with the people of J-K when some parties say they will restore Article 370.

This is a material for another agitation. Till Azad is alive, he will have to be killed to kill his ideology. I will not allow the people to be used for electoral gains on the basis of religion.... whether I win or not, whether I secure four votes or lakhs of them, he said.

Much blood has spilled, but if you support me, the blood will be mine now, he said.

The former J-K chief minister said he would not promise the moon and stars to the people but only the things that are achievable like the restoration of statehood.

Statehood can be achieved because there is no constitutional amendment needed We don't need a two-thirds majority for that. Our lands should be ours only and no outsiders should be able to own them.

"Our jobs should be ours only. Parliament is not needed for these two issues. So, I talk only about those things which can be achieved, he said.

He said political parties should not raise those slogans whose resolution is not in their hands or the hands of the people.

Referring to Apni Party president Altaf Bukhari's allegation that Azad had voted in favour of the abrogation of Article 370, he said Bukhari should first understand how Parliament works.

"I have been in the Parliament for 40 years. Let him be there for 10-20 years so that he understands against whom to vote. I voted against the Bill brought by the Home Ministry for the revocation of Article 370," Azad said.

Those who do not know about Parliament should talk less about it. It is better if they do not speak about it, he added.

He said had he not been an MP or the leader of the opposition, there would have been no one to raise the voice of the people of J-K in Parliament.

Some people, he pointed out, say they went to jail for not supporting the revocation of Article 370, but Azad did not.

Had I been here (in Kashmir), I too would have been jailed But, it did not stop me. I came to Srinagar and Jammu twice but was not allowed to move from the airports. Then I approached the Supreme Court for sharing the pain of the people of J-K, he said.