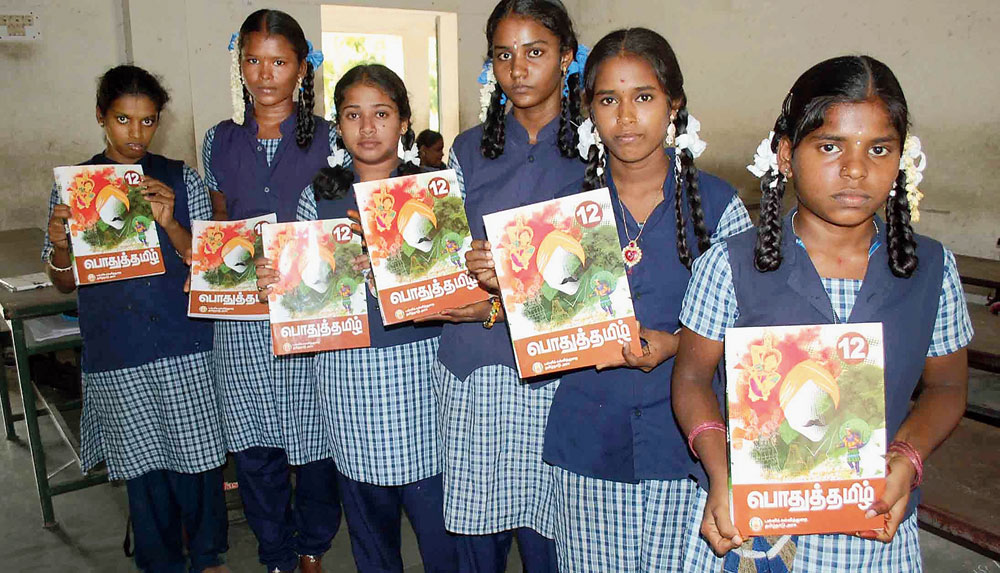 Class XII students of the Tamil Nadu State Board schools are being greeted with a textbook whose cover features Subramania Bharati, one of the greatest Tami literary figures and a patriotic social reformer, in a saffron, not the familiar white, turban.

The Opposition DMK and admirers of Bharati’s concepts on universal brotherhood have termed the cover of the new Tamil textbook as a subconscious attempt to alter the poet’s image among students.

That the new textbooks have started reaching schools at a time the National Education Policy draft has rekindled suspicions associated with Hindi has served to deepen the apprehensions.

The ruling AIADMK’s alliance with the BJP and the huge majority of the NDA at the Centre have also fed into fears of cultural appropriation.

Affectionately called Bharatiar, the legendary poet was never known to have sported a saffron turban.

The saffron turban has fuelled charged that while the BJP is using its governments at the centre and different states to alter content in history textbooks, the junior partner in Tamil Nadu is now painting Bharati’s turban saffron.

Bharati’s nationalism was unshakably rooted in internationalism and individualism. Although devotional and mystic in his writings, Bharati always remained vigil against caste and communalism.

He dared to remove both his caste tag and the scared thread when he was young. On the other hand, he adorned Dalits with sacred threads to challenge the orthodoxy and he used to sell tea at shops owned by Muslims as a show of solidarity. Bharati was a permanent attendee of church festivals in different parts of southern Tamil Nadu.

He promoted temple entry of Dalits and stood solidly for women’s rights. He had campaigned extensively against dowry and child marriage.

Critics of the saffron cover also point out that those behind such attempts must remember that Bharati was a firm believer in reason and science. He was always the first to acknowledge the shortcomings of the past and the moral failings of tradition, whether in India or elsewhere.

Established already as an emerging Tamil poet with strong notions of patriotism, Bharati married seven-year-old Chellamma when he was 15 and still in school. Hardly an year later, the poet with Brahminical background had left his native Ettayapuram near Thirunelveli for Kashi, the present Varanasi, for higher education.

According to his biographers and family members, the stay in Kashi for about three years had changed his perceptions. Filled to the brim with radical ideas, he returned to Ettayapuram in 1902 and started writing reams against the practice of child marriage.

Although nine decades have passed since his death, the turban, the gaze and the moustache of Bharati are easily recognised among the Tamil Diaspora living across the world.

The trip to Varanasi in 1898 was a defining moment, points out historian A.R. Venkitachalapathy in his book on Bharati, Who Owns that Song?

“Its immediate impact was on his coiffure and sartorial style. Bharati cut off his traditional tuft, cropped his hair (like a Bengali, it was said), shaved off his beard, and began to sport what became the iconic twirled moustache, scandalising family and community -– Tamil Brahmins did not usually sport moustaches. In 1898, Bharati stepped out of a clean-shaven, coy and conforming Tamil Brahminism into a new passionate devotion to India’s resurgence,” says Venkitachalapathy.

Then came his celebrated turban. His family sources say the poet had started wearing the turban as a mark of respect to one of his close friends in Kashi, a Sikh. Many Tamil researchers and historians insist that the turbans he used were usually white.

Politically, he belonged to the extremist wing of the Congress party that asserted India’s natural claim for independence. Although an ardent fan of Bal Gangadhara Tilak, he kept close contacts with Mahatma Gandhi and Sister Nivedita.

Internationalism was one of the keys to Bharati’s nationalism. Insularity of any kind was absolutely foreign to the poet’s temperament.

He concluded one of his most celebrated poems thus:

(A loose translation: There is no caste difference, my dear. It would be sin to divide people on caste lines. The real superior class are those people who are just, wise, educated and loving.)