Where crocodiles are morning guests 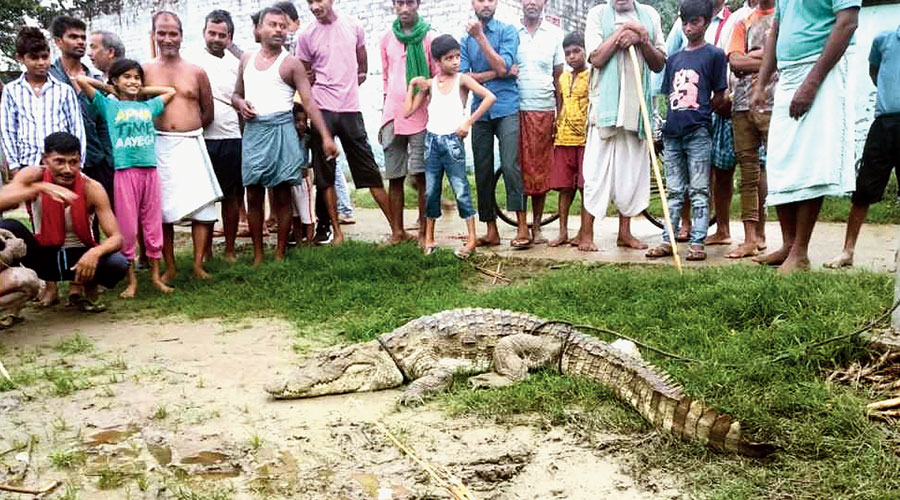 It sounded like somebody was knocking at the door. Virendra Yadav of Shastri Nagar in Bagaha town in West Champaran district of Bihar got up wondering who could have come so early on Monday morning.

However, the shouts of people outside stopped him from opening the door right away. He decided to open a window to peep out instead. Around a hundred people had assembled outside his house and they warned him about a crocodile at his door.

“It was flapping its tail and tapping at my door. I would have walked into danger had I opened the door. The crocodile had killed two goats before arriving at my doorstep,” Virendra said.

Locals gathered there tried to chase the crocodile away towards the Gandak river, which flows around 400 metres from the place. However, the crocodile became aggressive and injured two persons. The locals finally managed to catch it and tied it with ropes.

“A forest department team led by range officer Manoj Kumar rushed to Shastri Nagar after receiving information about the incident. They rescued the reptile and released it in the Gandak,” Bagaha block development officer (BDO) Pranav Kumar Giri told The Telegraph.

Bagaha divisional forest officer Sandeep Ranjan said the injured will be provided compensation according to the government norms and the seriousness of injuries.

Crocodiles are entering villages in West Champaran district as the mighty Gandak river has swelled up due to incessant rains in Nepal and Bihar over the past one week. Heavy discharge of water from the Valmikinagar barrage across the river on the Indo-Nepal border has also aided in the reptiles moving towards human habitation.

The sightings of crocodiles have been reported from several villages, including Kharpokhra, Kapardhikka and Naraipur along the river. Many of the reptiles have made a fresh habitat in ponds in and around the villages, creating fear among the people.

“The Gandak has a sizeable population of crocodiles. Some of them stray into the existing canal system and also towards human habitation when the river is in spate during the rains. Additionally, the discharge of excess water from the Valmikinagar barrage aids in the reptiles entering villages,” said Hem Kant Roy, conservator of forests–cum–director of Bettiah in West Champaran.

“Our teams have rescued four crocodiles in the last two days and released them back into the river. Reptiles usually stray into the villages during monsoon. Thankfully, there have been just one or two unsavoury incidents. We are also creating awareness among the villagers about what to do if crocodiles pay a visit,” Roy added.

The terror of crocodiles led to the residents to abandon Parsauni village under Piprasi panchayat in West Champaran after several of them started arriving through a water channel connected to the Gandak. The reptiles started attacking cattle, dogs as well as the people. The entire population of Parsauni shifted to nearby villages for safety, after living in fear of the reptiles for almost five years. Now, residents of Parsauni go to the village only for farming.

The 814km-long Gandak river originates from a glacier in the upper reaches of the Himalayas in Mustang district of Nepal, where it is called the Narayani.

It enters India at Valmikinagar in West Champaran in Bihar and flows on to fall into the Ganga near Sonepur in Saran district.

According to a census conducted by the Bihar forest department in 2018-19, there were around 251 crocodiles in the rivers in the state. The government is making efforts to conserve them.

Heavy rainfall for the past one week has led to various rivers like the Gandak, Kosi, Bagmati and Kamla Balan to swell and flood waters enter low-lying areas in Bihar’s East Champaran, West Champaran, Gopalganj, Sheohar, Sitamarhi, Madhubani, Darbhanga, Supaul, Saharsa, Muzaffarpur, Kishanganj and Araria districts. The affected districts are gearing up for relief and rescue operations, which would be launched if the situation worsens.