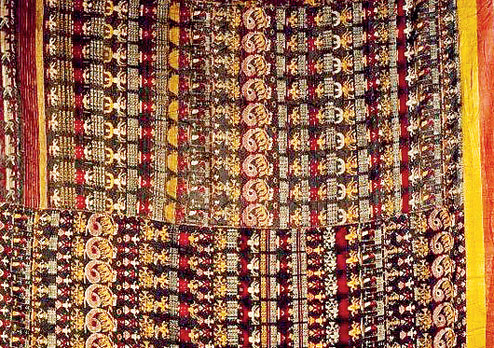 Guwahati, Jan. 16: The vibrant colours of the Vrindavani Vastra will be displayed in its entirety for the first time at an exhibition in the British Museum.

The exhibition, titled Krishna in the Garden of Assam: The Cultural Context of an Indian textile, will be held from January 21 to August 15 in London.

"The exhibition is centred on the famous British Museum textile known as Vrindavani Vastra, which has never been shown in its entirety before. It is over nine metres long. Although it is now clear that this magnificent textile, made up of 12 different strips of cloth, using four different sequences of design, was woven at least 100 years after the death of Srimanta Xankardeb, it is nevertheless a very fine example of the type of cloth in Assam," Richard Blurton, the senior curator (South and Southeast Asia), British Museum, told The Telegraph.

This is the first exhibition in Britain to explore the cultural history of Assam#.

A British museum statement said, "It is one of the most important Indian textiles in the museum's collection and dates back to about 1680. Assam has been renowned for many centuries as a centre for weaving silk and cotton. The lampas technique of weaving was used to produce the v astra and this example would have been woven on a wooden draw-loom using two sets of warp and two sets of weft threads. The lampas technique is now lost but had produced vibrant and highly sophisticated figured textiles between the 16th and 18th centuries."

This textile is associated with Krishna. It is made up of 12 strips of silk, each depicting incarnations of Vishnu and with captioned scenes from the life of Krishna. These scenes are recorded in the 10th century text, the Bhagavata Purana, and elaborated in the dramas written by Xankardeb.

He said, "The textile also had a life in Tibet, after it was used in Assam. We don't know the details but the 12 strips were taken to Tibet, stitched together and then re-used as a hanging in a Tibetan monastery. It left the monastery during the Younghusband Expedition in 1903-04, which was sent to Lhasa by Lord Curzon. It was acquired by Perceval Landon who was The Times correspondent on the expedition and the following year, he gave it to the museum."

"There are two other examples of this textile in the exhibition, along with illustrated sanchipat leaves from a manuscript of the Brahmavaivarta Purana on loan from the British Library, and modern dance masks from Majuli. There are contemporary textiles and two film elements. One of these is a video artwork by the Guwahati-based group, Desire Machine Collective, which is a meditative response to the vastra, while the other is a short documentary film put together from footage shot by Bruno Sorrentino at the 2014 Raas Leela festival in Majuli. Many episodes from Krishna's life also appear on the vastra," he said.

Blurton has also written a book on the vastra, which has just been released. The book looks at the art, technique and iconography of the textile and also places it within its wider religious, cultural and geographical contexts. He traces its fascinating history and its journey from Assam to London.