Advertisement
Home / India / We are natural allies, says Modi at meeting with Kamala Harris
'You are a source of inspiration for many'

We are natural allies, says Modi at meeting with Kamala Harris 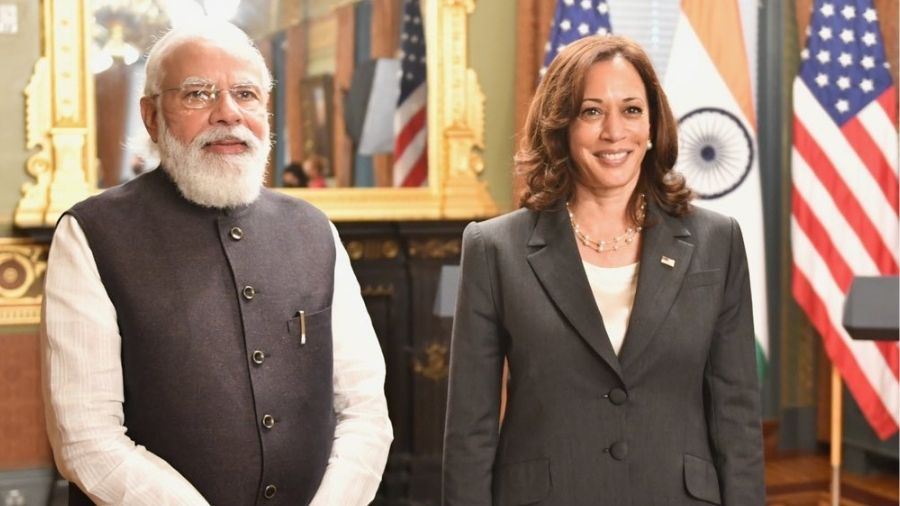 Prime Minister Narendra Modi has described India and America as "natural partners" as he held the first in-person meeting with Vice President Kamala Harris at the White House during which they decided to further cement the Indo-US strategic partnership and discussed global issues of common interest, including threats to democracy, Afghanistan and the Indo-Pacific.

"India and America are natural partners. We have similar values, similar geopolitical interests," Modi said in a joint media appearance with Harris on Thursday, the first-ever person of Indian origin to be elected as the vice-president of the United States.

Noting that India and the US are the largest and oldest democracies, Modi said the two countries share values and their coordination and cooperation is also gradually increasing.

Both the leaders appreciated that the bilateral relationship is on a sound footing, Foreign Secretary Harsh Vardhan Shringla told reporters here while giving details of the meeting that lasted for an hour.

This is the first meeting between the two leaders. Harris had earlier spoken with Modi over the phone in June during the COVID-19 crisis in India. "You are the source of inspiration for so many people across the world. I am completely confident that our bilateral relationship will touch new heights under President Biden and your leadership," Modi told Harris.

Later in a tweet, Modi said, "Glad to have met @VP@KamalaHarris. Her feat has inspired the entire world. We talked about multiple subjects that will further cement the India-USA friendship, which is based on shared values and cultural linkages."

The two leaders were wearing masks as they both spoke in front of a battery of  reporters from both India and the US.

Modi invited the 56-year-old Democratic leader and Second Gentleman Douglas Emhoff to visit India. "Both President Biden and you assumed office at a time when our planet faced very tough challenges. In a short time you have had many achievements to your credit be it COVID-19, climate change or the Quad," Modi said.

In a statement, the Ministry of External Affairs said the two leaders exchanged views on recent global developments, including in Afghanistan and reaffirmed their commitment towards a free, open and inclusive Indo-Pacific region.

The two leaders discussed the COVID-19 situation in their countries, including ongoing efforts to contain the pandemic through expedited vaccination efforts, and ensuring supply of critical medicines, therapeutics and healthcare equipment, it said.

"As relates to the Indo-Pacific, the US stresses on maintaining a free and open Indo-Pacific, Harris said, amidst China's aggressive moves in the strategically vital region.

Glad to have met @VP @KamalaHarris. Her feat has inspired the entire world. We talked about multiple subjects that will further cement the India-USA friendship, which is based on shared values and cultural linkages. pic.twitter.com/46SvKo2Oxv

Harris said the world is more interconnected and more interdependent than ever before. And the challenges that we face today have highlighted that fact. COVID-19, climate crisis and the importance of our shared belief in the Indo-Pacific region, she said.

Both sides acknowledged the importance of collaborative action on climate change. Prime Minister spoke about India's push for increasing renewable energy and the recently launched National Hydrogen Mission. He also emphasized the importance of lifestyle changes to promote environmental sustainability, the statement said.

Modi noted that he had the opportunity to speak to Harris after she assumed the Vice Presidency. "One of our interactions happened when India was battling a very tough wave of COVID-19 infections. I recall your kind words of solidarity that time," Modi said.

India was confronted with the second wave of the COVID 19 pandemic. "A very difficult time for India," he said. "Like a family, the sense of kinship and so warmly, you extended a helping hand, the words that you chose when you spoke to me, I will always remember that, and I'd like to thank you from the bottom of my heart," the Prime Minister said.

"Like a true friend, you had given a message of cooperation, and were very full of sensitivity and immediately after that we found that the US government, the US corporate sector and the Indian community, all came together to help India," he said.

Modi said that the US Government, companies based in the USA and the Indian diaspora were very helpful when India was fighting a tough wave of COVID-19 infections. Both leaders acknowledged the vibrant people-to-people linkages as the bedrock of the mutually beneficial education linkages and the flow of knowledge, innovation and talent between our two countries.

Modi said that four million people of Indian origin are acting as a bridge of friendship between the two countries.

Harris described India as a "very important partner" to the US and welcomed New Delhi's announcement that it will soon resume vaccine export. India stopped the export of COVID-19 vaccines after the second wave of the pandemic hit the country in April this year.

On Monday, India said that it will resume export of surplus COVID-19 vaccines in the fourth quarter of 2021 under the ''Vaccine Maitri'' programme and to meet its commitment to the COVAX global pool.

On the issue of the climate crisis, she told Modi that the US working together with India can have not only a profound impact on people of nations but around the world itself.

Their meeting comes a day ahead of the maiden bilateral meeting between Modi and President Joe Biden and the Quad Leaders' Summit at the White House on Friday.

They also discussed areas of future collaboration, including space cooperation, Information Technology, especially emerging and critical technologies, as well as the cooperation in healthcare sector.

Shringla said, the contribution of Indian professionals, especially in the IT domain, biotechnology, space, and other areas, which represent the knowledge economy was appreciated by both. There was a sense that India had capable professionals, in the high tech sector including research and development capacities, and the US which is known for cutting edge technologies and innovation, were obvious partners, he said.

Shringla said that the Vice President has graciously accepted the invitation of the Prime Minister to visit India.