Amit Shah, who had claimed sure victory in all the three states, remained closeted in his residence 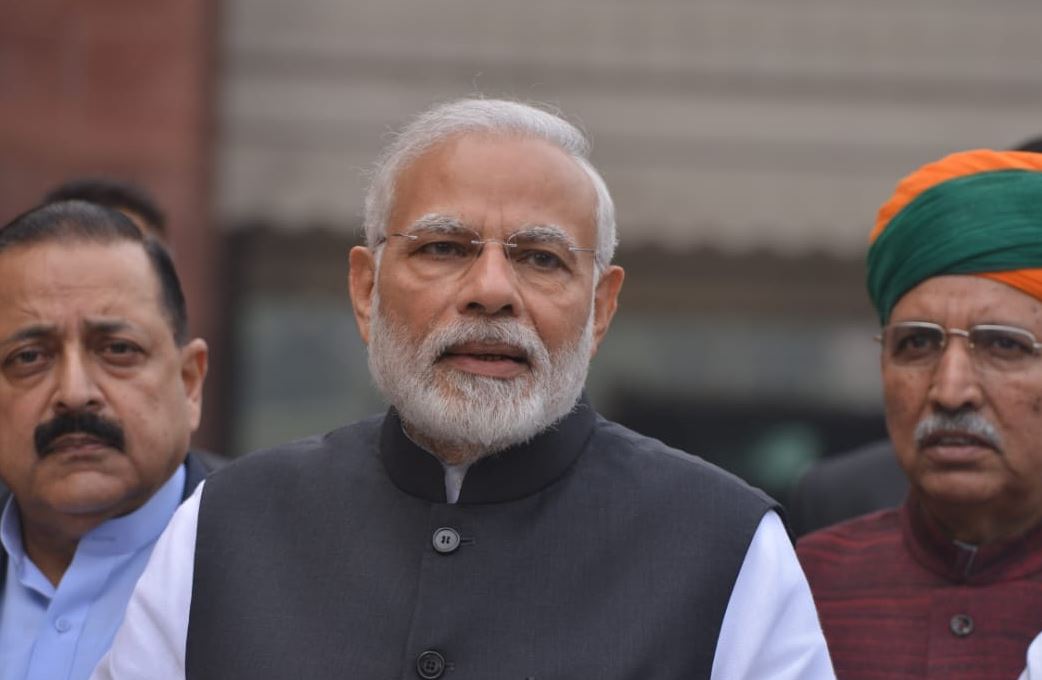 “We accept the people’s mandate with humility,” Prime Minister Narendra Modi tweeted on Tuesday night, capping a day on which many usually vocal BJP leaders were found tongue-tied.

Turning philosophical, the Prime Minister said: “Victory and defeat are an integral part of life. Today’s results will further our resolve to serve people and work even harder for the development of India.”

The Prime Minster took care to thank his principal opponent although he had vowed to make India “Congress-mukt”. “Congratulations to the Congress for their victories,” he tweeted.

“Congratulations to KCR Garu for the thumping win in Telangana and to the Mizo National Front (MNF) for their impressive victory in Mizoram,” Modi added.

He also expressed gratitude to the voters of all the five states and saluted his party’s workers.

That the results had come as a big blow to the BJP was evident by the mood at the party headquarters.

The BJP had fine-tuned a drill for election result days. Modi would land at the BJP headquarters and be showered with rose petals, which will be followed by speeches by Modi and BJP president Amit Shah.

On Tuesday, the party headquarters was more or less deserted through out the day.

Shah, who had claimed sure victory in all the three states, remained closeted in his residence.

Critics saw the results in these three high-stakes heartland states, out of five states that voted in this round, as the sign of a downtrend in Modi’s popularity — a perception the BJP’s managers sought to dismiss.

Modi had campaigned widely in the three BJP-ruled states of Rajasthan, Madhya Pradesh and Chhattisgarh, launching a vitriolic campaign against the Congress and the Nehru-Gandhi family and seeking votes in his own name.

Amid the agonisingly slow counting, particularly in the three BJP-ruled states, the tables of wins and leads were by evening portraying a drubbing for the BJP in Chhattisgarh and a clear defeat in Rajasthan despite a rally to make the loss “respectable”.

The party had high stakes in Madhya Pradesh, Chhattisgarh and Rajasthan, the first two of which it has ruled for three straight terms.

Both Modi and Shah had predicted the BJP would retain power in these states taking advantage of the welfare schemes of the central and state governments.

Modi had in a noisy campaign urged the voters to reject the Congress, but the rival improved its tally significantly in all the three states.

Three-term Chhattisgarh chief minister Raman Singh submitted his resignation to the governor before the final tallies were announced. Singh said his party would analyse the defeat.

A spirited BJP fight-back in Rajasthan, thanks partly to the large number of Congress rebels in the fray, failed to close the gap with a resurgent rival. Rajasthan has never re-elected an incumbent since 1993, and the Vasundhara Raje government’s visible unpopularity had anyway pointed towards only one outcome.

With the two states gone, the BJP leadership was on Tuesday evening looking at Madhya Pradesh to spare its blushes ahead of the Lok Sabha polls. The central Indian state is a former stronghold of the Jana Sangh, the BJP’s former avatar, and the party’s ideological parent RSS has deep roots there.

“After 15 years in government and widespread rural distress, if we manage to retain Madhya Pradesh, it would be big achievement,” a BJP leader, glued to the television set, said at the party headquarters here.

Party leaders indicated they would spare no effort to win over Independents and Bahujan Samaj Party members in Madhya Pradesh if the opportunity arose to form the government.

BJP leaders contended that state election results could not be seen as a verdict on Modi’s popularity.

“State elections are fought on state issues. The general election alone will be a verdict on Modi’s leadership,” a BJP senior said.

The BJP’s information technology chief, Amit Malviya, tried to articulate the party’s position in a tweet sometime after 8pm.

“It has been a humbling day no doubt. But there is nothing to feel despondent,” he posted. “After 15 years in office in 2 states, if the BJP is still a force in MP and has notched up an impressive show in Rajasthan, it underlines the decline in Congress. Let us fight back and emerge stronger!”

Bounceback bid by BJP in Rajasthan on twin ‘T’s