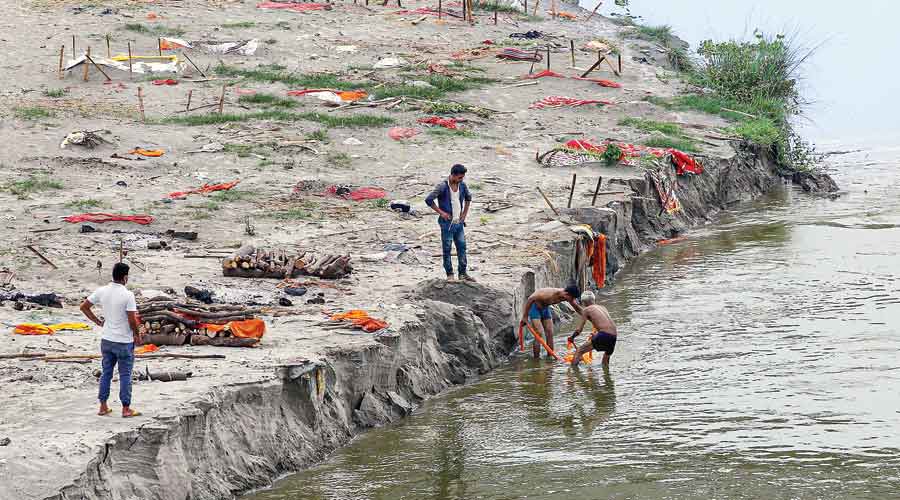 The Reporters’ Collective decided to use the massive amount of data collected during the Gujarat trip to build an online memorial.
File picture
Pheroze L. Vincent   |   New Delhi   |   Published 16.09.21, 03:00 AM

Till now, burning pyres on sprawling grounds and riverbeds and overflowing crematoriums had borne testimony to the enormity of the tragedy. Now, those who died during the pandemic in India are being immortalised on an online “Wall of Grief”.

“Our goal is not to criticise. We want people to come together, and demand answers. If we forget what happened, then the system won’t improve…. The second wave showed the inequality in society in terms of how the system worked for some and failed others,” said Mayank Aggarwal, who is leading a group of journalists that has created the Internet memorial.

The news agency Reporters’ Collective started the Wall of Grief website after its members visited Gujarat to work on an article on the steep number of excess deaths during the pandemic, with the government’s official Covid toll not matching data from municipal records and the visuals of never-ending queues of the dead outside crematoriums and burial grounds.

The Reporters’ Collective decided to use the massive amount of data collected during the Gujarat trip to build an online memorial.

The website for now has figures only from certain areas of Gujarat and records over 68,000 deaths from March 2020 to April 2021. It also contains municipal death registers and news articles on the pandemic.

The Wall of Grief is a work in progress, with its creators hoping to prepare a nationwide database of those who died during the pandemic.

The memorial page has the names of the deceased, one after the other in the run-on format. If the cursor is placed on a name, other details such as the age, gender, location, occupation and date of death of the person pop up inside a box.

The records are from 68 of Gujarat’s 170 municipalities that cover around 6 per cent of the state’s population, said Tapasya, an associate lead of the project who goes only by one name.

The website says: “They will not be forgotten. They will not be erased from our collective memory. Together we build this wall of grief to commemorate the lives we lost during the pandemic in India.”

The website also accepts contributions of memorials from the general public, seeking the above information in addition to a photograph of the deceased person, a copy of the death certificate and an obituary message. The certificates and the photographs are only used for verification and not uploaded.

Volunteers are welcome to contribute data or help process the information collated.

The names of the deceased have been taken from hand-written death registers maintained by municipalities that formed the basis of the Reporters’ Collective’s news report.

The Collective found that deaths in Gujarat in April this year were five to 10 times higher than those in the same month in the past two years. The increase in the total number deaths during the pandemic over the previous year was 27 times the state’s official Covid death toll, indicating that many deaths caused by the coronavirus had not been recorded.

The Wall of Grief features all those who died between March 2020 and April 2021, irrespective of the cause.

Tapasya said that in the absence of a “clean way to segregate deaths”, counting the monthly deaths in excess of those during the corresponding time the preceding year was the “most effective way to calculate the pandemic deaths, which include deaths due to comorbidities and the saturation of the public health infrastructure”.

“While doing the (news) story, we got so much data. The story could merely be condensed into a few numbers to show the immense loss. We thought it would be good to have something in the public domain as a fair way of paying homage,” Tapasya said.

While Aggarwal and Tapasya are based in Delhi and are fully committed to the Wall of Grief, they have had help from colleagues at the collective, the National Foundation of India and 101 Reporters, besides groups such as nurses’ and teachers’ unions who are contributing data.

Launched on August 25, the website now only has a fragment of Gujarat’s municipal data, but the founders are working on data from Andhra Pradesh, Maharashtra, Tripura and Odisha.

Wallofgrief.org also has the death data sources in spreadsheets as well as news articles, research papers and a link to the Covid Tracker for Nurses in India.

“For some districts, for example, we have data but one municipality’s data is missing,” said Tapasya, referring to the gaps in reporting deaths.

Aggarwal said they were trying their best to upload more data in the weeks to come.

“It actually takes a village to bring this out…. The system is not designed to reveal, but keep (figures) hidden,” he said. “Someone has to answer why deaths increased manifold in 2021. We were not able to find these answers in our news story, which led to this memorial…. People need a space to mourn and share grief.”

Death under-count alarming in UP