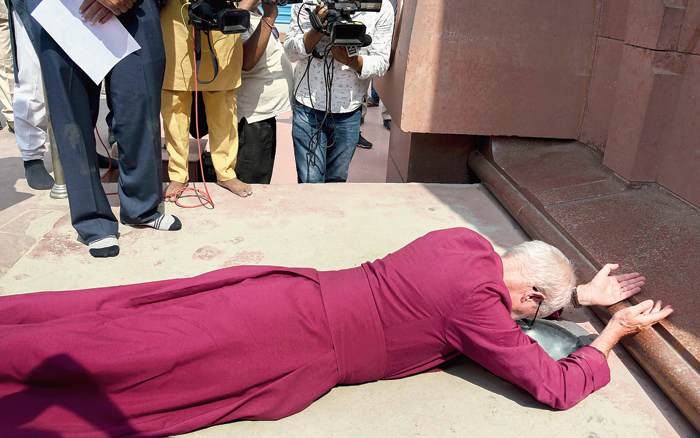 The Most Reverend Justin Welby, Archbishop of Canterbury, prostrated himself before the Jallianwala Bagh memorial in Amritsar on Tuesday and uttered the words “very sorry” .

Welby prayed at the site of the massacre and went further than the Queen, David Cameron or Theresa May with his carefully constructed choice of words.

“I have no status to apologise on behalf of the UK, its government or its history. But I am personally very sorry for this terrible atrocity,” the Archbishop said in his pastoral address.

He began his address by saying: “I feel a deep sense of grief, having visited the site of the horrific Jallianwala Bagh Massacre today in Amritsar, where a great number of Sikhs, as well as Hindus, Muslims and Christians, were shot dead by British troops in 1919.”

The full text of Welby’s statement has been put out by Lambeth Palace, the official London residence of the Archbishop of Canterbury.

The Archbishop’s note in the visitor’s book in Amritsar had also been well thought-out: “It is deeply humbling and provokes feelings of profound shame to visit this place that witnessed such atrocities hundred years ago.

“My first response is to pray for healing of relatives, of descendants, of our relationships with India and its wonderful people. But, that prayer renews in me a desire to pray and act so that together we may learn from history, root out hatred, promote reconciliation and globally seek the common good.”

Reaction in the UK, where many campaigners have been pushing for a full apology, was immediately generous.

An assessment that a kind of Rubicon had been crossed came from Dr Kim Wagner, senior lecturer in British Imperial History at Queen Mary University of London and the author of Amritsar 1919: An Empire of Fear and the Making of a Massacre.

“This is quite an amazing gesture,” Wagner told The Telegraph. “Although Welby makes it clear that he is not acting in an official political capacity, his position does mean that this apology and public act of penitence carries real weight. I suspect this will have a significant impact and be well-received by many people, both in India and in the UK.”

His book reveals that Welby is following in the footsteps of the missionary C.F. Andrews, Mahatma Gandhi’s close friend, who was “one of the first Englishmen to apologise while he was gathering information on the massacre and oppression in Punjab for the Congress inquiry in 1919”.

But that was then and this is now when a number of MPs, not all Indian-origin, are pressing the British government for a full apology.

Tory peer Jitesh Gadhia said: “The Archbishop has shown considerable humility and contrition in visiting Amritsar and prostrating in front of the Jallianwala Bagh memorial, expressing his regret and seeking forgiveness as a religious leader.

“Whilst the Archbishop does not represent the UK government, it is welcome that a national figure of his stature has stated how ashamed and sorry he is for the heinous crime committed 100 years ago.

“I would welcome the opportunity to discuss with the Archbishop how the UK schools’ curriculum can reflect upon and draw lessons from such historic events, particularly as we are now both vibrant multicultural democracies.”

The Church Times has spoken to Preet Kaur Gill, Labour MP for Birmingham Edgbaston and the first female Sikh MP, who told the paper she had been “very moved” by the Archbishop’s words.

She said: “The Archbishop’s message, that an apology alone is not enough to reckon with the deep scars riven by Britain’s colonial past, is welcome. This acknowledgement of the need for contrition is especially powerful in the context of the UK government’s refusal to formally apologise for Colonel Dyer’s actions last year.”

She added she was “very grateful for his leadership, in asking that we learn from one another and find commonality between faiths in an era of division”.

Virendra Sharma, Labour MP for Ealing Southall who secured a parliamentary debate on Jallianwala Bagh in the summer, said that it was “heartening” to see the Archbishop “uttering such words of humility and humanity. The Jallianwala Bagh massacre represented the turning point in India. From then on, the Empire was seen only as harsh, brutal and repressive”.

He called for “an official government apology which sets the tone for a UK that understands our responsibilities stemming from empire and colonialism”, and a memorial in London, “not just to the victims of the Jallianwala Bagh massacre, but to all the victims of colonialism, and one that teaches future generations about the horrors of empire”.

The only discordant note was struck by historian Zareer Masani: “Rank hypocrisy and opportunism, pandering to Indian chauvinism, without a word about India’s record trampling human rights today….”

As Prime Ministers, Theresa May had expressed “deep regret” while David Cameron called the massacre a “deeply shameful event”.

In 1997, the Queen had described the massacre as “a distressing example” and added “but history cannot be rewritten…”.

The British Foreign Office will probably be secretly glad that Welby has used the words, “very sorry”, which the government has been wary of uttering for fear they might encourage claims for compensation.