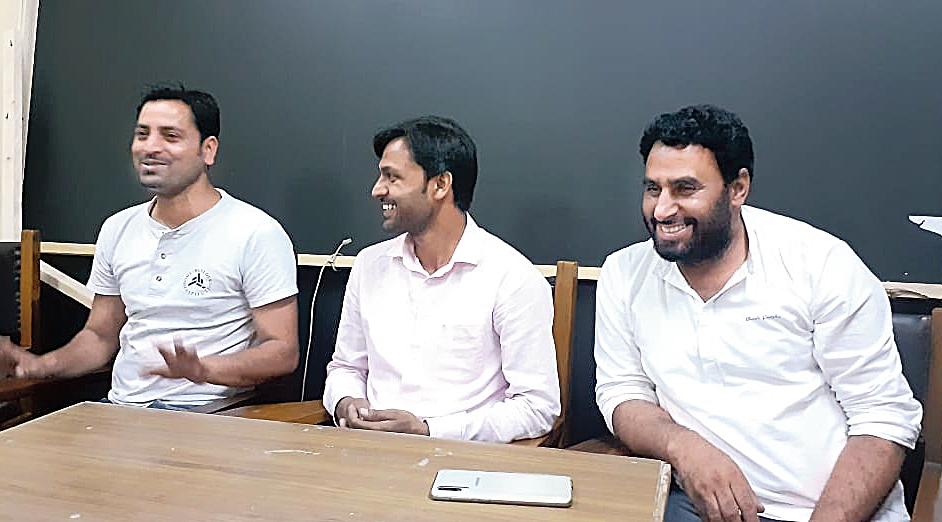 No PDS rations for the Valley villages since August 5, with the tribal Bakerwals on the brink of starvation. Rotting crops in the absence of transport. No work for day labourers. An acute shortage of medicines. Zero development funds for the panchayats since they were elected nine months ago.

Three Kashmiris who contested panchayat elections braving militant threats, and now feel abandoned by an establishment they had stuck out their necks for, were in Delhi on Monday where they painted a grim picture of the humanitarian situation at home.

Two panchayat members and a former panchayat member-cum-tribal activist from Anantnag — all Independents — told reporters they had come to the national capital as the media in their state had been left dysfunctional by the clampdown.

“We left for Delhi on August 22 to get a chance to speak about what is happening…. On TV, we don’t see any local journalist reporting, and those who are visiting the state are unwilling to listen to us,” Iqbal Ahmed Wani, a panch from Trahpoo panchayat halqa (cluster of villages) in Achabal block, said.

“Block-level leaders of the National Conference, People’s Democratic Party, Congress, CPM and many others are detained. Maulvis are being given sermons to read by the government. This is the worst kind of ‘Emergency’.”

Wani said his village of 3,500 had received no rations since August 5, the day Jammu and Kashmir lost its special status and came under a lockdown. No day labourer has found work since then.

“We haven’t received even Rs 10 to spend on development projects in our village since the panchayat elections nine months ago. Our proposals to the 14th Finance Commission have been rejected five times. Only funds for Swachh Bharat have arrived,” he said, speaking at A.K. Gopalan Bhavan, the CPM central committee office.

Wani was an SFI member from 2002 to 2005 and was with the CPM for a few years after that, until he became a contractor with the state’s power department. He is president of the Jammu and Kashmir Panchayat Congress, a professional body of panchayat members.

Wani said the group had been unable to meet Congress MPs Rahul Gandhi or Ghulam Nabi Azad, and ended up at the CPM office as: “If Kashmiris trust anyone today, after the Sikhs, it’s the communists. On TV, we see how they have spoken up for us.”

He said: “We wanted to run community schools at the mosques and dargas in our halqa, as schools are not functioning because of the blockade. But the police said that children must go to regular school and ordered the teachers to open the government school or face arrest.

“Now, though the schools are open, parents are too scared to send their children. Our elders say they have never seen such anger. If children don’t go to school, what else will they do but throw stones?”

Monday was the first time Wani’s wife, a nurse at a government hospital in Kulgam, had been able to go to work since August 5, commuting in an ambulance, he said. His wife had been able to call him on Monday afternoon from a police station as part of an outreach initiative, after having to wait three days for her turn.

All three said the nomadic Bakerwals were the worst placed, facing starvation if rations under the public distribution system were delayed any further.

The tribes are entitled to 5kg rice per month along with other foodstuff, which they haven’t received this month, said Mumtaz Ahmad Khan, chief spokesman for the All Tribal Coordination Committee (ATCC), an apolitical body.

“Nothing can be transported to the Bakerwal tribes who live in the hills between November, when it begins to snow, and April. The paths become impossible to navigate even by mules as there are landslides,” said Khan, who resigned as panch of Brariangan-A panchayat in Shangus block two months ago in protest at the government’s failure to send funds.

“They haven’t got rations or found work or been able to sell sheep, and yet the government claims that rations are being delivered at doorsteps. If the blockade of rations continues, many may not survive the winter.”

Khan added: “In every village we visited there is a shortage of food and medicines, and people say that some have died for want of medicine. Even paracetamol and baby food like milk is not available. It feels like the government wants to starve us to death.”

The three of them — the third being Talib Hussain Bajran, a panch from Brariangan-A and president of the ATCC — said the pear crop had perished as there were no transporters, and Kashmir could lose its apple crop too if the curfew continued.

All of them agreed that the backlash from the public was expected to be violent once the curfew-like curbs were lifted.

Wani spoke about the crackdown on people like him. “Till August 4 midnight, I had received calls from several police officers asking me to come and meet them. My friends advised me to stay indoors, so I did not go to the police and get arrested,” he said.

“The Internet stopped at midnight and mobile phones at dawn. From what we know, around 1,600 social activists including Sheikh Ghulam Rasool (environmentalist and the founder of the Jammu and Kashmir RTI Movement, a rights NGO) and several panchayat members have been detained.”

Bajran said: “We (those who contested the rural polls) have been marketed by the state so much that we can’t survive today. We contested the elections when all the parties (except for the BJP) boycotted them, under threat of death at the hands of the militants. Today, we are being arrested under the Public Safety Act.”

Wani added: “For 20 years, I told people that India’s secular democratic set-up is better than Pakistan’s. Aaj hamein kis layak chhod diya (What good have we been left for today)? It feels like a war zone where the civil administration has vanished, and the army now comes to our homes to tell us not to worry, the rations may come soon.”