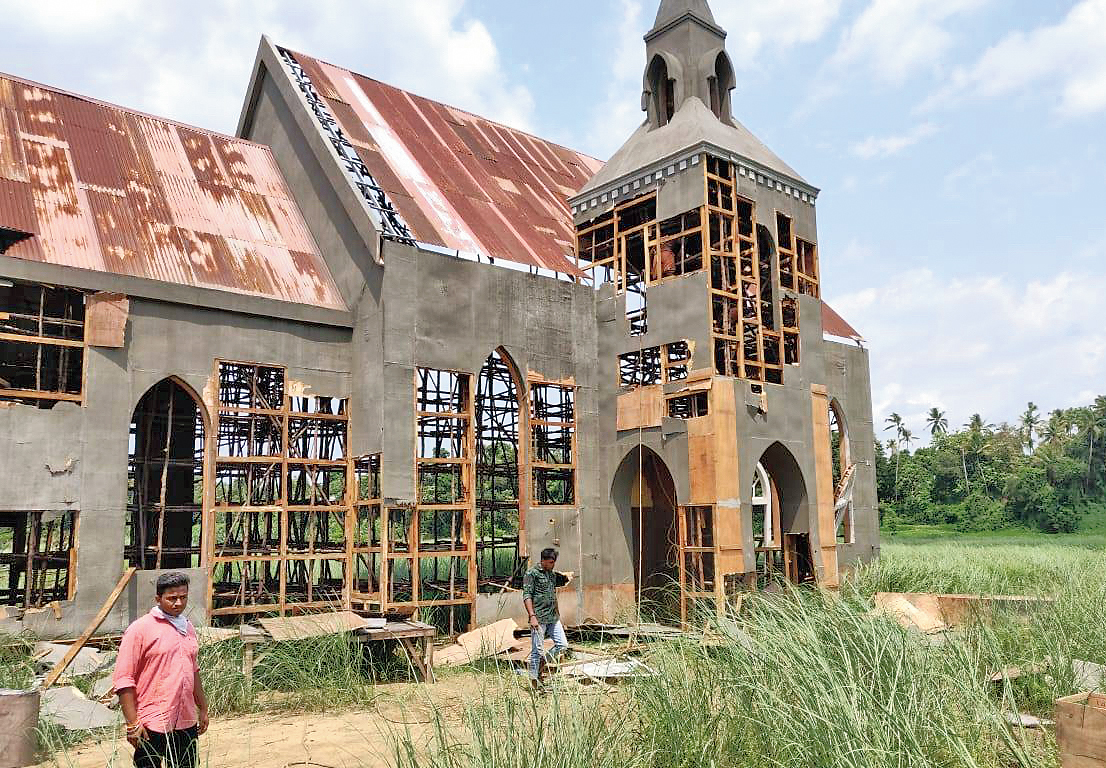 Alleged Bajrang Dal activists destroyed a Rs 80-lakh set built for a Malayalam film in Kerala on Sunday evening because it depicted a church in the birthplace of Adi Shankaracharya.

Eyewitnesses said a group of men attacked the huge wood-and-metal structure with sledgehammers and crowbars in Kalady, Ernakulam district.

A man named Hari Palode, who calls himself state general secretary of the Antharashtriya Hindu Parishad, a purported Bajrang Dal ally, posted still pictures of the vandalism on Facebook late on Sunday night.

“We had complained when such a thing was built in Kalady manappuram (riverbank) right in front of Mahadeva,” Palode wrote, appearing to claim the set was built near Kalady’s famed Mahadeva temple.

“We are not used to begging; so we decided to demolish it.”

He left a mobile number with the message, but there was no ring when The Telegraph called.

In his post, Palode had thanked “Malayattur Rathish” for the act, describing him as the Ernakulam president of the Rashtriya Bajrang Dal.

Police later arrested Rathish. A special investigation team is looking for the other vandals.

The BJP distanced itself from the vandalism. “I got to know from my enquiries that they (the vandals) have no links with the BJP,” state unit president K. Surendran said.

Mahadeva temple authorities denied the set had been built near the shrine.

“It was built on the (Periyar) riverbank, which is government land,” temple manager Surya Narayanan told this newspaper.

Subin Kumar of the Kalady Sivarathri Committee, linked to the temple, filed the first police complaint, accusing the Bajrang Dal of the vandalism.

The film industry quickly filed another, said the general secretary of the Film Employees Union of Kerala, B. Unnikrishnan.

More than 100 workers had built the set at a cost of Rs 80 lakh for the film, Minnal Murali (Lightning Murali), sources said.

Director Basil Joseph expressed his anguish in a Facebook post. “I don’t know what to say. For some it could be a joke, a troll or politics. But for us, it was a dream,” he wrote.

“We had to sweat a lot to make this set. The art director and his team had worked for several days in the hot sun. It was the hard-earned money of the producer.”

Producer Sophia Paul described the destruction of the set as “so unfortunate and a colossal loss”.

She said “all required permission to build the set at the location was taken” and that the set had been “planned for one of our most important scenes”.

Lead actor Tovino Thomas posted a picture of the voucher from the Kalady panchayat that granted permission to build the set.

“We had only heard about such incidents in northern India and now we have ourselves faced something similar,” Tovino wrote on Facebook.

“Sanghavadi extremists who go mad at a film set must be stopped,” filmmaker Aashiq Abu said.

Actress Rima Kallingal hit out at Palode’s outfit. “At a time when we should all stand together, these AHP elements spreading hate should be stopped at all costs,” she said.