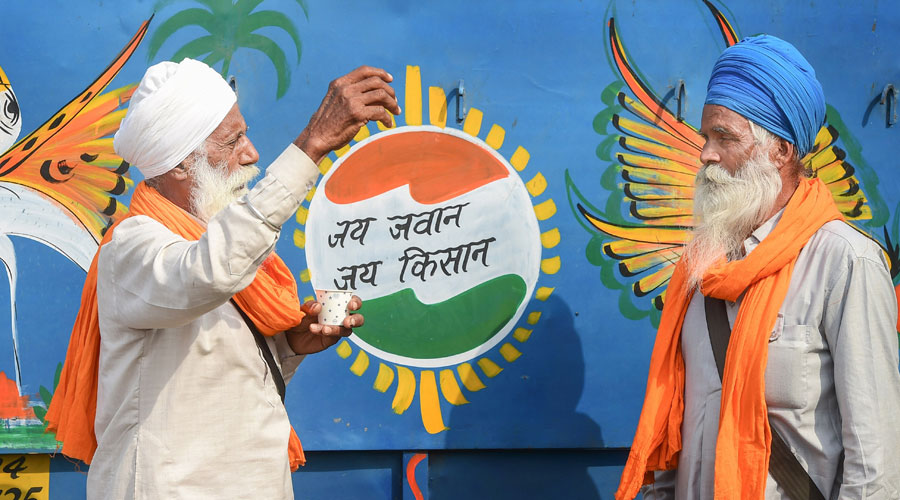 The Terai Kisan Sangathan, a peasants’ union from Uttarakhand that is associated with the Samyukta Kisan Morcha (SKM), has announced a 1,600km yatra from March 6 to expand the ongoing protest against the three farm laws.

“The 15-day march on foot as well as by tractors and other vehicles would cover 1,600km and pass through 15 districts of Uttar Pradesh and Uttarakhand,” Tajinder Singh Virk, president of the Sangathan, said at a mahapanchayat in Udham Singh Nagar, Uttarakhand, on Monday.

“The yatra will start from Muzaffarnagar and culminate at Ghazipur border in Ghaziabad district, where a large number of farmers have been on dharna for about 100 days”, he said.

Jagrat Singh Bajwa, convener of the SKM at Ghazipur border, told reporters the government would get a befitting reply in future elections if  the farmers’ demand to repeal the three laws is not met.

Rakesh Tikait, the BKU spokesperson, also attended the mahapanchayat. “Our movement is purely for the farmers’ rights. We don’t have anything to do with any political party. We don’t need to work to elect or reject a government,” Tikait said.

“The government’s silence for the past 15-20 days is indicating that something is going to happen. The government is planning some steps against the agitation,” he said.

However, Tikait said farmers would not step back till a solution is found. “The farmer is also ready. He will look after his crop as well as the agitation. Let the government hold talks when it has the time,” he said.

A leader of the TKS who didn’t want to be named said: “The government has shown no interest in resolving the stalemate as in several rounds of talks, the Union ministers have made it clear that they wouldn’t withdraw the three new farm laws, which promote corporate contract farming with the farmers at the receiving end.”

The leader added: “If a particular political party in power is trying to destroy the farmers, then we cannot say that we don’t want to throw out of power that dispensation.”

Balbir Singh Rajewal said that a call has been given to farmers camping at the three Delhi border points – Singhu, Tikri and Ghazipur —  to block the KMP Expressway from 11am to 5pm on Saturday.

The 136km Kundli-Manesar-Palwal Expressway was inaugurated by Prime Minister Narendra Modi in 2018.

The Samyukta Kisan Morcha also said that a joint programme of action is being worked with many central trade unions that have expressed their support and solidarity with the ongoing farmers’ movement.

In a statement, the Morcha said the month of March will witness numerous mahapanchayats across the country, including in Madhya Pradesh, Karnataka, Telangana,  Bengal and Odisha.