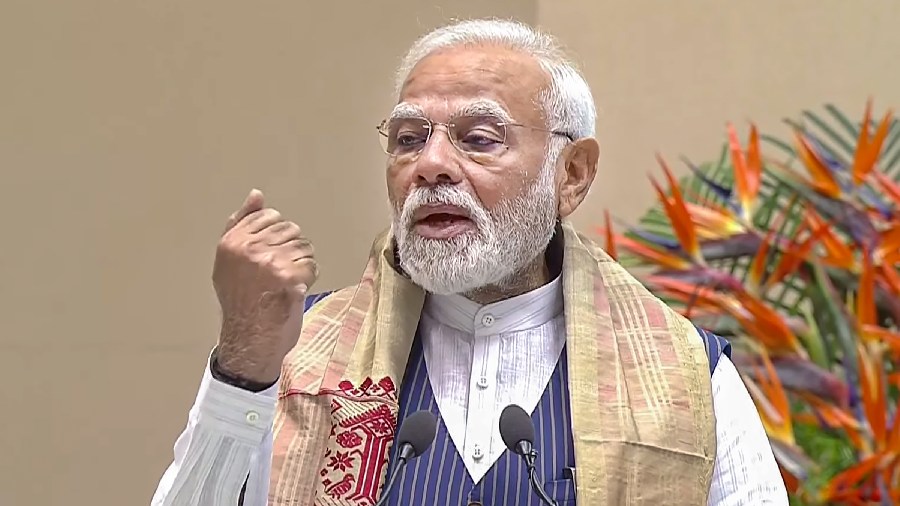 A month-long Centre-sponsored programme in Uttar Pradesh to showcase the historical and cultural links between Tamil Nadu and Kashi (Varanasi) has prompted the DMK and ally CPM to accuse the government of using “phony” pro-Tamil sentiments to propagate the RSS ideology in the southern state.

The DMK has cheekily referred to how a young Periyar had visited Kashi in search of truth, got disillusioned, given up his plans for renunciation, and returned home to evolve into the great atheist and rationalist who led the Dravidian Movement.

The Kashi-Tamil Sangamam, inaugurated last week by Prime Minister Narendra Modi in his constituency of Varanasi in the presence of Uttar Pradesh chief minister Yogi Adityanath, will continue till mid-December.

The effort to “celebrate, reaffirm and rediscover age-old links between Tamil Nadu and Kashi” is expected to see more than 2,500 official delegates, including students, brought from Tamil Nadu on special trains in batches. The programme includes visits to centres of pilgrimage like Ayodhya and the Triveni Sangam in Allahabad.

The ruling DMK has said that Modi’s celebration of the Tamil language at the inauguration was ironic given the Centre’s bid to “impose” Hindi and promote Sanskrit.

“This Kashi-Tamil Sangamam, ostensibly providing a platform for the Sanskrit and Tamil traditions to engage and converse for better understanding (through seminars and exhibitions), is nothing but a blatant attempt to intrude into the state education department’s affairs, do whatever pleases them and to catch them young to plant the seeds of the RSS ideology and Hindutva by bussing in students from Tamil Nadu to Varanasi and other pilgrim centres,” Balakrishnan wrote.

He expressed shock at Adityanath’s claim at the inauguration that the “two languages — Sanskrit and Tamil — arose from Shiva’s two-faced damaru, describing as “absurd” the attempt to accord equal status to these two classical languages from a religious-mythological perspective.

“This claim goes against the grain of... scientific studies done by linguists and scholars on the origin of languages; in the evolutionary process, human societies developed languages as part of an objectification process when men related themselves to other persons and nature, realising the necessity of labour for sheer human survival,” Balakrishnan said.

Besides, how could this account of the birth of two languages explain the profusion of languages in India, the CPM leader asked. Are other Indian languages lesser than Sanskrit and Tamil, he wondered.

Associating Tamil with one particular religion — Hinduism — does not accord with historical and literary evidence, Balakrishnan said. “The earliest extant classical Tamil literature of the Sangam period of poetry (100 BCE to 250 CE) do not speak of any gods or idol worship, but only of how the early Tamils related to nature,” he wrote.

“’Bakthi’ (devotional) literature like the Tiruvasagam came much later. By then, there was already Buddhist, Jain, Christian and Islamic literature in Tamil, written at different points of time. So, to identify Tamil with... Hindu spiritualism, as some speakers sought to do at the inaugural function, does not accord with the facts.”

Balakrishnan said the purpose of the Sangamam was to promote the RSS ideology of “homogenising” religion and language in the country. “They are using Tamil to promote the Sanatanists’ cause,” he alleged.

DMK party organ Murasoli said in an editorial that Modi’s words at the Sangamam inauguration did not match his government’s deeds.

Is the BJP government ready to walk the talk by taking immediate steps to stop the “imposition” of Hindi on non-Hindi-speaking states, make Tamil one of the official languages at the Centre, and de-emphasise Sanskrit as a third language in the Centre’s New Education policy, Murasoli asked.

The DMK mouthpiece also mentioned the young Erode Ramasamy’s (Periyar) 1904 visit to Varanasi, where his unpleasant experiences profoundly influenced his later politics, his biographers say. The ugly scenes on the streets of the “holy town” --- activities he considered immoral, rampant begging and dead bodies floating in the Ganga --- and the humiliation he suffered when he was denied food at a choultry because of his caste, caused him to “abhor” the town, according to the Collected Works of Periyar E.V.R, compiled by K. Veeramani.