Uttar Pradesh: BJP up against 'bhaichara' forged by farmers 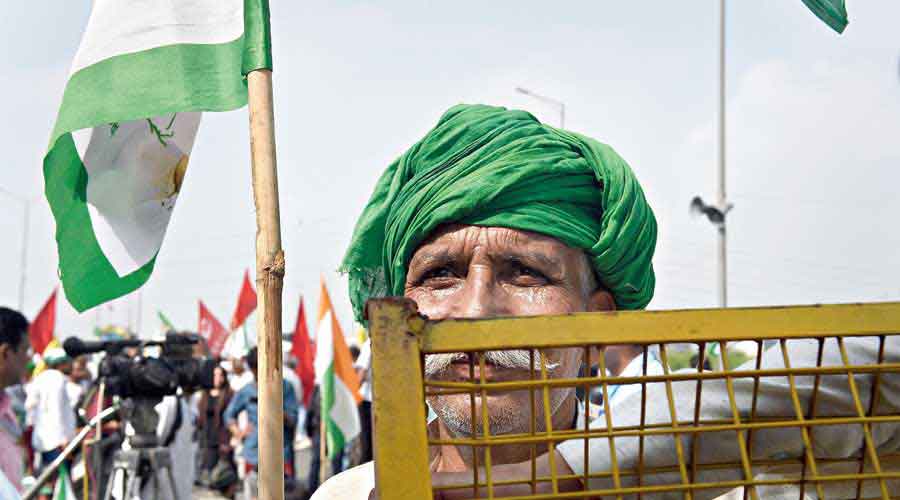 Farmers of western UP insist that what the peasants’ movement did was to consolidate the simmering discontent within the farming community over the anti-farmer policies of the BJP governments at the Centre and in the state.
File photo
Anita Joshua   |   Muzaffarnagar, Baghpat (UP), Shamli   |   Published 09.02.22, 01:41 AM

The prolonged farmers’ agitation against the now-repealed farm laws may have started in Punjab but it is western Uttar Pradesh that helped sustain it when push came to shove, particularly after the 2021 Republic Day violence put the movement on the back foot.

Late entrants to the agitation, the farmers of western Uttar Pradesh helped visibly challenge efforts by the BJP government and its ecosystem to communalise the movement and also project it as confined to two states — Punjab and Haryana. More so after the Bharatiya Kisan Union’s Rakesh Tikait broke down in full view of TV cameras when the Uttar Pradesh government sought to break up the protest at Delhi’s Ghazipur border, taking advantage of the setback caused to the farmers’ agitation by the violence on Republic Day.

This set in motion a series of events that triggered a realignment of forces in western Uttar Pradesh, which is now manifesting into a challenge for the BJP in an area it had swept in three elections — the 2014 and 2019 Lok Sabha polls and the 2017 Assembly elections — based on the polarising Muzaffarnagar riots of 2013. Western Uttar Pradesh has around 150 Assembly seats.

Sizeable sections of Jats have become disenchanted with the BJP and are re-investing in “bhaichara” (brotherhood) with Muslims, stitching up the Jat-Muslim coalition that was the sustenance of Jat politics in this belt pre-2013.

Farmers of western Uttar Pradesh insist that what the peasants’ movement did was to consolidate the simmering discontent within the farming community over the “kisan virodhi” (anti-farmer) policies of the BJP governments at the Centre and in the state.

The past five years under the BJP government has seen the lowest increase in the price of sugarcane, compared to its predecessors, and higher input costs, compounded by the “menace” of stray cattle.

Be it in the urbanised parts of Muzaffarnagar, its villages or Chhaprauli in adjoining Baghpat district, the refrain is the same. “How would you feel if someone steals your salary at the end of the month?” asked Bobby of Kishanpur Baral village in the Chhaprauli Assembly constituency, preparing to guard his fields along with some other farmers at night.

“The BJP cracked down on slaughterhouses and tightened cow slaughter laws with an eye on Hindu sensitivities. But it has proved to be counter-productive as stray cattle (awaara pashu) are now entering our fields and destroying our crops. All day we till our fields and then spend the night out in the cold to stop stray cattle from entering,” said Vijender Baliyan of Soram village in Budhana tehsil of Muzaffarnagar.

Sunning himself near his fields watching a video of local MP Sanjeev Balyan, Vijender — a recent supporter of the BJP — is clearly conflicted. His Jat moorings beckon him towards the “nalka” (tap) — the Rashtriya Lok Dal symbol — but the possibility of RLD ally Samajwadi Party returning to power makes him wary.

“Goondagardi (lawlessness) has stopped since Yogiji has come to power,” he told The Telegraph. Another farmer and diehard supporter of “Babaji” (as Adityanath is often referred to in these parts), Gyanendra Balyan, chipped in that the road running through the fields — from Budhana to Shamli — was the BJP government’s work.

Both acknowledge that the government was wrong in maligning the farmers’ protest. Gyanendra had participated in the protest but maintains it is possible to remain a supporter of the BJP and also stand in solidarity with the farmers.

He, in fact, is a jeans-clad farmer. The ruling ecosystem had questioned the bona fides of the protesting farmers because some of them wore jeans. When this was pointed out, Gyanendra said: “Modiji and Yogiji did not say that; those who said that do not know anything about farmers.”

Deep in the sugarcane fields, another group of farmers were hard at work; all steadfast RLD supporters. They were chuffed that a campaign visit of chief minister Adityanath to their village on Monday had been cancelled as their gram pradhan had written to the district magistrate stating he would not take responsibility if people protested, as had been the reception given to other BJP campaigners in some parts of the district.

For them the “double engine” — the BJP’s oft-parroted argument for electing it in the states as then the people will have the same party at both levels — has not worked, they insisted.

“The farmers’ movement and the attitude of the government and the ruling party were confirmation for us that the BJP is an anti-farmer party,” said Harinder Singh Panwar, who runs a jaggery-making unit in Bhora Kalan.

While the ration provided during the pandemic is widely appreciated by those who received it and is earning the chief minister considerable goodwill, the landed farmers were not among the beneficiaries. Add to this the fact that their expenses have gone up because of the rise in diesel prices as well as LPG, besides the high cost of electricity in the state. Fertilisers have become expensive, and there is no compensation for damage of crop by stray cattle.

On Tuesday, shortly before the close of campaigning for these seats that vote on Thursday in the first phase, the BJP announced that it would provide free power to farmers. Asked if this would address some of the discontent among farmers, Dharmendra Malik of the BKU said: “The Samajwadi Party has already announced free power for farmers. People have stopped believing the BJP’s promises. In 2017, the BJP had promised that sugarcane farmers would be paid their dues within 14 days but mills continue to delay payment by over a year.”

Another contributing factor to discontent among farmers is the unemployed youth in their homes. “Our children are jobless. The government has not carried out any recruitment for the past few years and our children will soon become ineligible to apply because of their age,” said Rajender Singh, pointing to his son hanging around. “There are at least 50 young men like him in our village seeking jobs.”

As with the Ujjwala scheme, whose benefits have been nullified by the manifold increase in the price of LPG cylinders that has forced many to return to traditional means of cooking, there were complaints about the PM Kisan Samman Nidhi also, with some farmers claiming they have not received more than a couple of instalments.

“I received the first two instalments. Subsequent instalments have been rejected on the pretext of paperwork and I have spent more money trying to fix it,” said Omkar while stating it was true that “goondagardi” had reduced in the state.

“Jats are not going to be swayed by this effort to polarise again. Both communities have been working hard over the past few months to restore the bhaichara that was nurtured by Chaudhary Charan Singh and Mahendra Singh Tikait. We have held panchayats where this slogan was raised every time,” he told this newspaper, echoing Rakesh Tikait’s claims that the polarisation formula is not going to work in western Uttar Pradesh this time round.