Residents cite lack of firewood in the five cremation ghats in the area and thus relatives, fearful of contracting the virus, could be dumping the bodies in the river 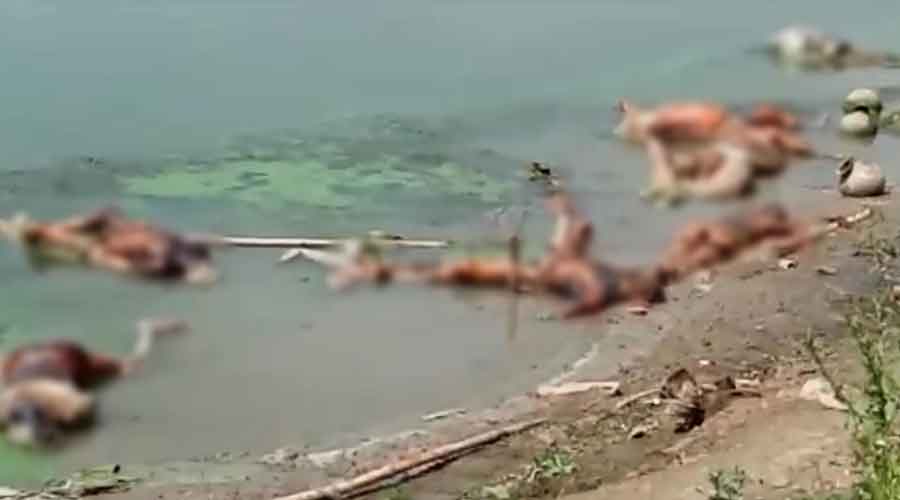 Around a dozen bloated and decomposed bodies were on Tuesday found floating in the Ganga at Ghazipur district of Uttar Pradesh, a day after two dozen bodies were brought out of the river in a nearby area and many more were fished out in Bihar’s Buxar district.

Residents of Bara and Gahmar villages in Ghazipur said the five cremation ghats in the area did not have enough firewood at a time many people were dying of Covid-19. They said relatives, fearful of contracting the virus, could be dumping the bodies in the river.

Sudhir Singh, a villager of Gahmar, told The Telegraph over phone on Tuesday: “The nagar palika’s sweepers had been deployed late on Monday night to carry the bodies to the other side of the river and bury them in the sandbed. We helped them. Many bodies were completely decomposed and couldn’t be lifted and ferried in boats. So we somehow tied them to the boats with ropes and pulled them to the other side of the river where they were buried five-six feet deep in the sand.”

“Now, more bodies have been seen in the river in Bara, 10km from Gahmar. Let us see how the administration manages this,” Singh added.

Ishwar Chand, a local social worker, said: “There is no firewood at any of the five ghats in Gahmar. However, at least 40 people are dying of Covid here every day. What can the people do except for immersing the bodies in the Ganga?”

Gahmar was set up by people in 1530 and is considered one of the biggest villages of Asia with a population of 1.2 lakh. There are 22 hamlets in the village and at least two people have been dying of Covid in each everyday, residents said.

The Ganga passes through Allahabad, Varanasi and Ghazipur before entering Buxar district of Bihar.

An eyewitness in Bara told this newspaper on Tuesday afternoon that he could see a dozen bodies either floating in the river or lying scattered on its banks.

“We believe they were thrown into the river by the people of the area because they either feared contracting the virus or couldn’t find space at the cremation ground,” he said.

Ramesh Maurya, the sub-divisional magistrate of the area, said: “These bodies don’t belong to Ghazipur. They must have come floating from other places.”

Maurya didn’t say from where the bodies had come floating from.

M.P. Singh, the district magistrate of Ghazipur, said: “We are conducing an inquiry to find out where from these bodies are coming.”

The Bihar government on Tuesday said a total of 71 bodies had been brought out of the Ganga in Buxar district, 15km from Bara.

Water resources minister Sanjay Kumar, a key aide of chief minister Nitish Kumar, tweeted: “The Bihar government is seized of the matter of unfortunate case of floating mortal remains in river Ganga.… The bodies have floated into Bihar from UP.”

Jha said doctors had confirmed upon post-mortem that the deaths had taken place “four-five days” ago. He said the chief minister was pained at both the tragedy as well as the “harm” to the Ganga.

“The last rites of 71 bodiesperformed as per protocols. A net has been placed in the Ganges in Ranighat, bordering UP and Bihar. We have advised the UP administration to be vigilant. Our administration is keeping vigil, too. Advise all to give respect to the dead and also to Maa Ganga,”Jha tweeted.