US wants Pakistan to take immediate action on terrorism: Jaishankar

He said the regional issues, including Pakistan, Afghanistan, Iran and south east Asia, were discussed during the 2+2 dialogue 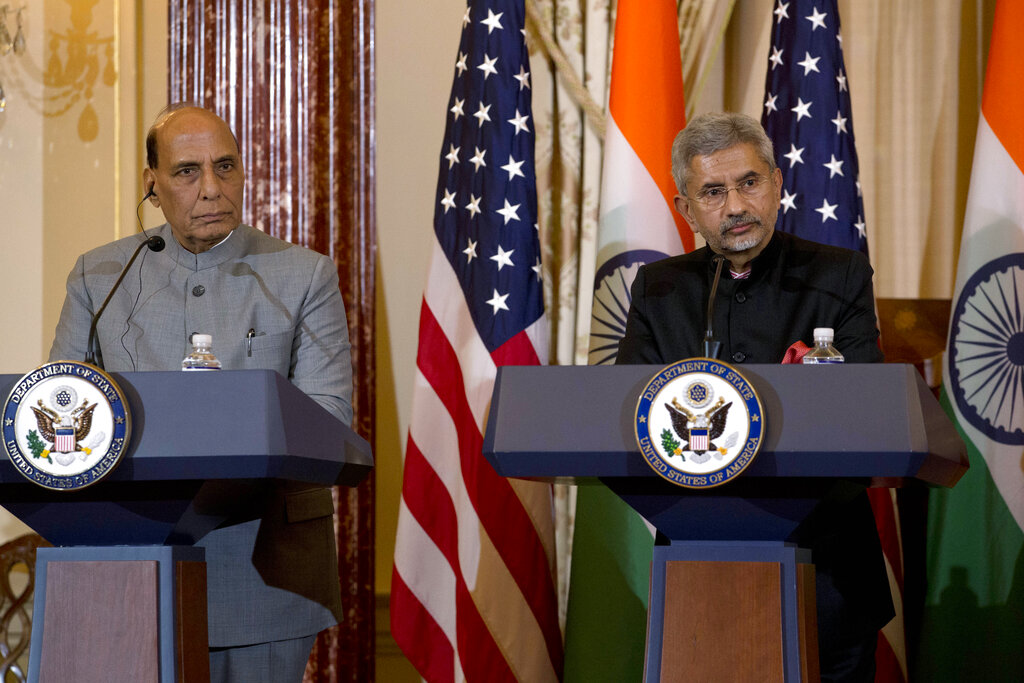 External affairs minister S. Jaishankar and defense minister Rajnath Singh speak during a news conference after a bilateral meeting the US and India at the department of state in Washington, Wednesday, December 18, 2019
AP
PTI   |   Washington   |   Published 20.12.19, 04:32 AM

The Trump administration has a very clear position on Pakistan and wants Islamabad to take immediate, sustained and irreversible action on reining in terror groups and to ensure that its soil is not used for terrorism, external affairs minister S. Jaishankar has said, a day after the conclusion of the second India-US 2+2 dialogue.

Jaishankar told a group of Indian journalists in Washington on Thursday that the relationship between India and the US had expanded both in its scope and content.

He said the regional issues, including Pakistan, Afghanistan, Iran and south east Asia, were discussed during the talks.

'With regard to Pakistan, what we heard was a very clear position from the American side which was for them to take immediate, sustained and irreversible action regarding the fact that territory under their control is being used for terrorism,' he said.

The US has supported several Indian initiatives including coalition for disaster resilient infrastructure and Indo-Pacific oceans initiative.

The natural focus for the discussions were foreign policy, defense and national security policies, he said.

In a major decision, the 2+2 ministerial decided to have Indian liaison officers with Bahrain-based US naval forces central Command and possibly with the special operations command, he said.

On the other hand, a US liaison officer is likely to be stationed at the Information Fusion Centre for the Indian Ocean Region (IFC-IOR), Jaishankar said.

The centre has been established by India to advance cooperation on maritime security across the region. According to the joint statement, they also discussed ways to enable closer army-to-army and air force-to-air force ties and to explore cooperation between special operations forces, he said.

Describing the decision to hold Tiger Triumph tri-services exercise annually as a major outcome of the ministerial, Jaishankar noted that it was important to do this humanitarian assistance and disaster response (HADR) exercise because one of the trends seen over the last few years is that some countries in the region do need to come forward to address that need.

'India has now taken the lead to a large extent in the recent past. So, working with the Americans who have a lot of experience and capabilities in the region,' he added.

Signing of the Industrial Security Annex provides the framework for the exchange and protection of classified military information between the industries of the two countries. This is very important for industrial collaborations under 'Make in India', he said, noting that such an arrangement existed at the government level.

Finalisation of a Statement of Intent to co-develop several projects and also of the Standard Operating Procedure for setting forth implementation guidelines for projects under DTTI and the Industry-to-Industry Framework, were other key areas of progress in the defense sector, Jaishankar said.

The two countries agreed to explore the establishment of Maintenance Repair and Overhaul (MRO) facilities in India.

'Maintenance, repair and overhaul is an important business. It's very necessary business. There are our capabilities in India, there are our platforms, many of them of American origin, not just in India, but in the larger region. So, we need the support of American OEMs to do that,' he said.

In addition to his bilateral meetings with Pompeo, Jaishankar also held a meeting with the national security advisor at the White House.

'One, of course was that we agreed on an internship program,' he said.

Every year about 200 Indian interns would come to the US. Students at post-secondary or graduate levels will come here and essentially look at internship opportunities in different areas, he said.

The two countries also agreed to strengthen the bilateral parliamentary exchanges. US Congress, historically, has played an important factor in this relationship and so has members of parliament, he said.

'We would love to encourage more interaction between them and Parliament,' Jaishankar said.

Observing that India wants to build its strength in counterterrorism jurisprudence, the external affairs minister said the ministerial looked at judicial cooperation between US Federal Judicial Center and the National Judicial Academy in Bhopal.