Advertisement
Home / India / Urdu press: Razing illegal, then why this?

Urdu press: Razing illegal, then why this?

Inquilab, an Urdu daily, said a feeling of disappointment would not be out of place after Ayodhya verdict 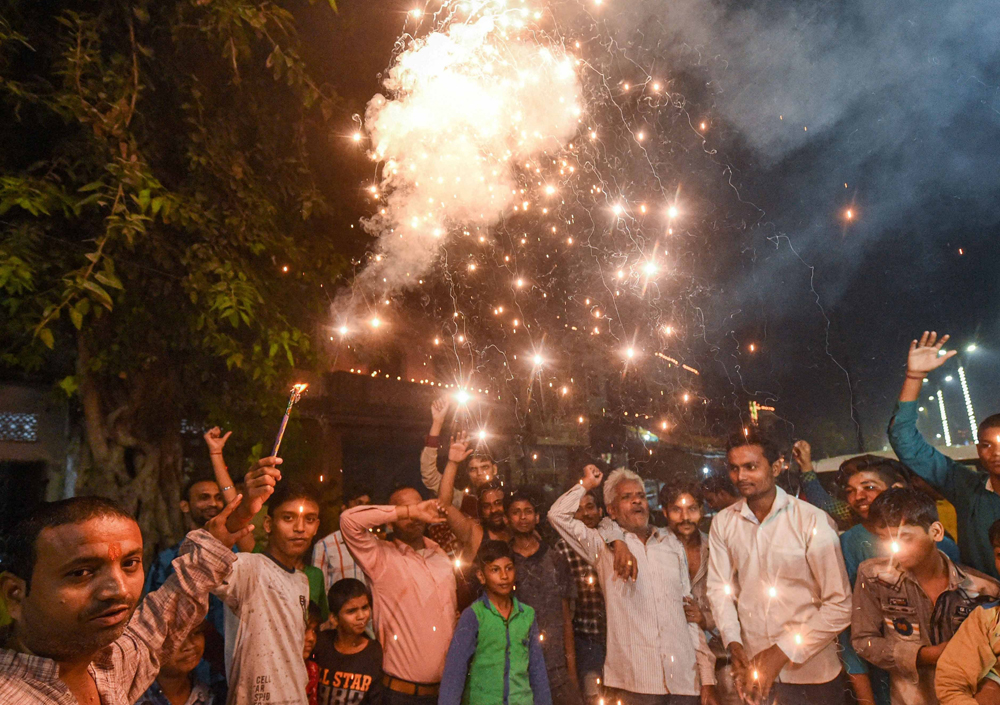 India’s Urdu newspapers on Sunday reacted to the Ayodhya verdict by appealing for harmony and asking Muslims to exercise restraint and sobriety, while also underlining disappointment within the community.

Inquilab, one of the largest-circulated Urdu dailies, wrote in an editorial titled “After a Long Wait” that what the verdict says had always been an acceptable option — except that now the last ray of hope had been extinguished.

It posed a question agitating many minds: If the court accepted that a mosque existed at the site and had been demolished illegally, why wasn’t the verdict in favour of the mosque?

“This is the only point which is beyond comprehension — that if a mosque was there, then why was not the judgment in favour of it?” it said.

“The verdict seems to be based on circumstances rather than evidence,” it added, while stressing that it needed to be studied in detail. It praised the ordinary citizen for maintaining peace.

Inquilab also had a query about the apex court directive to provide the Muslims with an alternative five-acre plot in Ayodhya to build a mosque.

“The court has ruled that Muslims have also the right to be given land as compensation for the loss, (but) the timing and place has not been decided,” it said.

“In contrast, the government has been asked to form a trust to have the temple built. The feeling of dissatisfaction persists here too, as no concrete and specific decision has been taken for a mosque that was visible to the eye till December 6, 1992.”

Hamara Samaj highlighted that the country’s top court had paved the way for a Ram temple in Ayodhya despite accepting that the demolition of the Babri Masjid had violated the law and that the 1949 installation of the Ram idol was a desecration.

“This is very interesting,” a front-page report said.

The newspaper said that soon after the verdict was pronounced, members of Hindu groups began chanting slogans outside the court and celebrations were held in Ayodhya despite the instructions from the Centre and the top court to maintain the ‘Ganga-Jamuni tehzeeb’ (syncretic Hindu-Muslim culture).

“The BJP has always played politics on the issue of the Ram temple, and the judgment has come at a time when it has its government both at the Centre and the state (Uttar Pradesh),” a report in Hamara Samaj said.

Khabar Rojnama carried a report quoting some Muslim leaders as saying that the “judgment should be respected even though there is dissatisfaction and disappointment” and that “some parts of the verdict are in our favour and some parts against us”.

The report said that Muslim leaders had by and large welcomed the verdict and appealed for peace. “The verdict should not be seen in the context of victory and defeat. Although the judgment is not according to our expectations, Muslims should not feel sad and must keep faith in God,” the report said.

On its front page, the newspaper quoted Tushar Gandhi, great-grandson of Mahatma Gandhi, as saying: “Nathuram Godse would have been called a patriot if Mahatma Gandhi’s assassination case was retried by the top court today.”

Tushar Gandhi had on Saturday tweeted in English: “If the Gandhi murder case was retried by the Supreme Court today, the verdict would have been Nathuram Godse is a murderer but he is also a desh bhakt.”

Mera Watan, in a front-page article titled “Bhagwan Ram was born inside Babri Mosque”, said the Supreme Court had ruled that the place under the central dome of the Babri Masjid was Ram’s birthplace. It appealed to Muslims to maintain calm.

Rashtriya Sahara stressed that a Ram temple and a mosque would come up in Ayodhya and urged Muslims to see reason and maintain peace.

An article in Hamara Samaj said: “The way the mosque was desecrated on 22-23 December 1949 by secretly placing the idol of Ram there, and the other related events till its demolition, are extremely sad. Such shameless acts by politicians, especially those belonging to the Congress, and government officials are an integral part of the story of the betrayal faced by the Muslims.”

Inquilab also carried an article by its editor Shakeel Shamsi, headlined “InnAllah M’assaabireen”, a Quranic verse that means “Indeed, Allah is with the people who have patience”.

It said the mosque had been demolished on December 6, 1992, in connivance with the then P.V. Narasimha Rao government at the Centre and the Uttar Pradesh government. It added that the violence that followed had killed 2,000 Indians, before another 900 died in the Mumbai riots.

It said that only after this were Muslims linked to terrorism, and the Mumbai blasts and other terror attacks that followed were described as revenge for the demolition.

“That’s why everyone was praying for a verdict from the Supreme Court that would not trigger violence in the country. Although the All India Muslim Personal Law Board and some other Muslim organisations are not satisfied with the verdict, everyone is saying at the same time that we should accept the judgment because everybody knows Allah is with those who have patience,” the article said.

It asserted that the court order had brought the decades-old dispute to a closure.