Activist explains why she tweeted 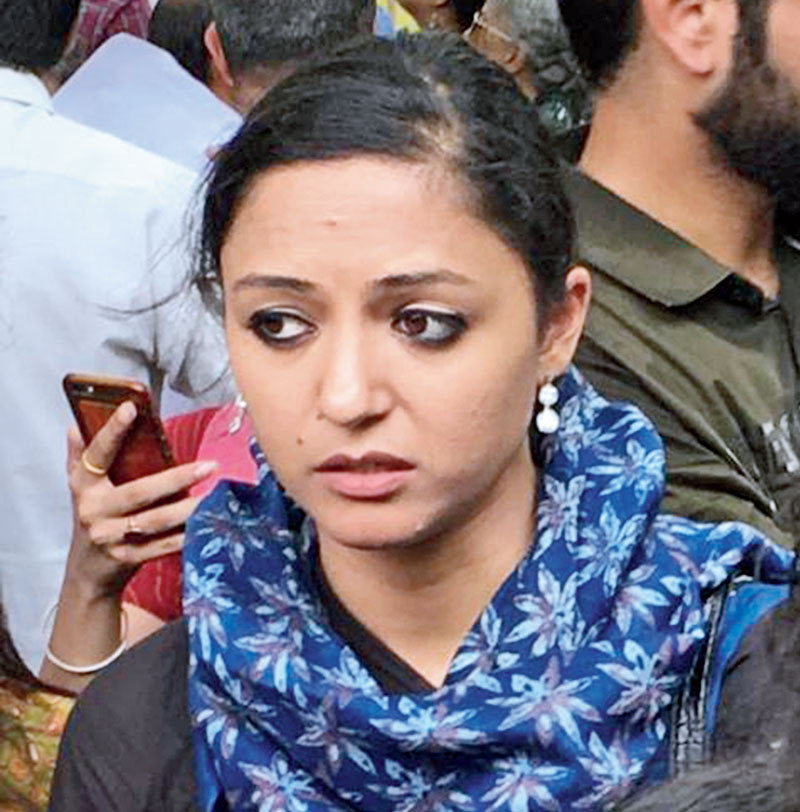 Since Monday, however, she has faced a shrill campaign waged on news channels and social media calling for her arrest for tweeting that the army had tortured people in Kashmir.

Shora, who hails from Jammu and Kashmir and is currently in New Delhi, had put out a series of tweets based on conversations with Kashmiris coming to the capital after restrictions were eased in the Valley.

The tweets had centred around the struggles of daily life — cooking gas shortage, people unable to recharge cable television subscriptions, and one tweet on officials reviewing health centres had shown the state in good light.

The last two tweets hit a raw nerve on national channels, one of which ran a poll on whether she should be arrested, and several promoted hashtags calling for her to be taken into custody.

The tweets had alleged that armed forces “are entering houses at night, picking up boys, ransacking houses, deliberately spilling rations on the floor, mixing oil with rice”. Shora had claimed that in Shopian, “four men were called into the army camp and interrogated (tortured). A mic was kept close to them so that the entire area could hear them scream, and be terrorised. This created an environment of fear in the entire area.”

ANI reported a denial from the army, which called Shora’s allegations “baseless” and intended to “incite unsuspecting population”.

A lawyer lodged a complaint of sedition and incitement against Shora, which has been transferred to Delhi police’s special cell that handles terrorism-related cases.

Shora, general secretary of IAS officer turned politician Shah Faesal’s Jammu and Kashmir People’s Movement party, told The Telegraph: “Human rights violations are so routine in Kashmir that I am surprised that the army commented on my tweets…. Journalists can’t travel freely through Kashmir, and the government is suppressing work on documenting what is happening in the state by shutting down communication. This is effectively suppressing news of violations.”

Shora added: “In this situation, I merely tweeted what several people coming to Delhi are telling me…. My cousin witnessed CRPF (personnel) smashing windows of homes in Srinagar, and they prevented her from recording them. It is not feasible to demand proof from people for whom democracy and the rule of law have been suspended…. My biggest anxiety is not the burden of proof or the fear of arrest. I am anxious lives should be saved and our dignity upheld.”

Shora is one of the few political activists who have not been detained over the scrapping of the state’s special status.

She was in Bangalore when the government took the steps and almost the entire political leadership of Jammu and Kashmir was arrested. Since then, Shora has been in Delhi, helping Kashmiris in distress because of the communication blackout and preparing a petition that was filed in the Supreme Court seeking the restoration of the provision that granted special status to the state.

Since Monday, several TV journalists have made enquiries at an apartment complex where Shora’s sister used to live in south Delhi. Currently working out of homes of friends in the capital, Shora said that despite the storm, common people she met at groceries on Monday were not abrasive.

“Even those who support the abrogation of Article 370 express regret at the conditions prevailing in the state right now…. I normally leave such reportage to journalists. A Kashmiri journalist who just returned to Delhi told me that his phone was (kept) confiscated during his entire trip. It’s worse for journalists based in Kashmir. The website of the Greater Kashmir newspaper has not been updated since August 5,” she said.

Shora wants the army to follow up its denial with a probe. “If one of the largest armies of the world has the time to respond to a tweet, then they should also initiate a fair and impartial investigation, and if they find any personnel guilty, they should be court-martialled,” she said.

“My hopes aren’t very high as when a voter was tied to Major (Leetul) Gogoi’s jeep and paraded in 2017, he was given a gallantry award even though he was in violation of the army’s own standard operating procedures,” Shora added.

In response to journalists demanding she prove her allegations, she tweeted: “Dear Indian media, what will you do with proof? Pathribal fake encounter was established as cold-blooded murder by CBI. Supreme Court said that even though it was pre-meditated murder, we can’t prosecute because of AFSPA. What did you do? Did you run a campaign for justice?”

In 2006, the CBI chargesheeted five Rashtriya Rifles personnel for killing five villagers in 2000 near Pathribal and passing them off as foreign terrorists.

In 2012, The Supreme Court said that no court could take cognisance of the chargesheet without the sanction for prosecution by the government. In 2014, the army closed the case on grounds that it did not find any evidence of the crime.