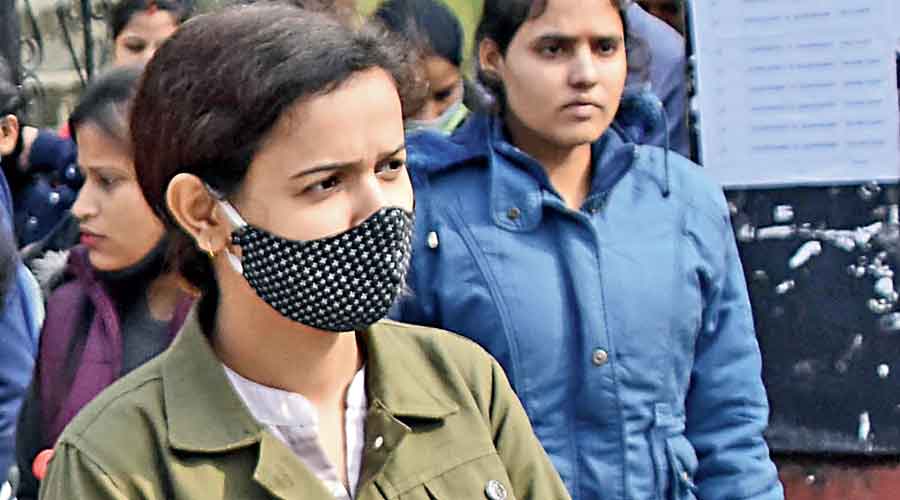 Two hours into the three-hour Teacher Eligibility Test (TET) in Uttar Pradesh on Sunday, over 19 lakh candidates across the state were told to stop writing and return home. The reason: the question paper had been leaked, yet another strike by the exam mafia that Yogi Adityanath had claimed to have eradicated.

“I had started from home in Mohanlalganj at 6am and reached the exam centre in Sarojininagar at 8.30am. We were informed at 11.10am, about two hours after our exam had started, that we have to stop and leave the hall,” said Rohini Singh, a resident of Lucknow district, after coming out.

The TET was being held to recruit primary teachers.

“The government claims it has a foolproof examination system in place. However, we have come to know that it was not the education department or the police but relatives of some candidates who exposed the paper leak early in the morning and raised the issue in Lucknow and Meerut. It was only then that the police got into action,” said Santosh Kumar, another TET candidate in Lucknow.

Aspirants stand in a queue to enter an examintaion centre for Uttar Pradesh Teacher Eligibility Test 2021 in Mathura on Sunday.
PTI Photo

Relatives of several candidates and their relatives had protested outside exam centres in Meerut in the morning, alleging the question paper had been leaked and that they too had been approached by racketeers.

“The government knew about the leak from Saturday night itself but tried to suppress it. The police picked up some people on Saturday evening. The government woke up when several candidates and their parents shouted slogans in front of exam centres in Meerut,” Kumar said.

Sources said many candidates who hail from Uttar Pradesh but live in Delhi had travelled to Noida and Meerut to appear in the exam.

The Uttar Pradesh basic education minister, Satish Dwivedi, denied that the government had prior knowledge of the question paper leak. “We cancelled the exam as soon as we came to know about it. The special task force of Uttar Pradesh police is probing the case and will get to the cheating mafia.”

He added: “The TET will be held again within a month. The candidates will not be asked to pay the exam fee again.”

The STF arrested 23 people on Saturday night using technical and other intelligence from different cities, additional director-general, law and order, Prashant Kumar, said in Lucknow. “We had to stop the exam midway,” he said.

PTI quoted the officer as saying that those arrested included four from Lucknow, 13 from Prayagraj, three from Meerut and one from Kaushambi district.

“Photocopies of the question paper were obtained from them, which was shared with the government. It came to light that the copy bore the same set of questions as the official question paper,” he said.

“Immediately it was decided by the government that the exam needed to be cancelled and reconvened in the coming one month.”

Chief minister Adityanath said the culprits would be booked under the National Security Act and the Gangster Act.

“The question paper was leaked. I issued an order to cancel the exam and arrest the entire racket. Instructions have also been given to re-conduct the exam within a month; no candidate should be charged additional fees,” he said.

Adityanath said orders had been issued to transport the students back to their hometowns on UPSRTC buses free of cost. He said the properties of those involved in the crime would be seized by the government.

The TET was to be conducted at 700 centres across the state in two sittings.

The fiasco took place despite Adityanath’s repeated claims that he had tackled the exam mafia in the state.

The Congress accused the Uttar Pradesh government of shielding the kingpins.

Priyanka Gandhi Vadra tweeted: “Corruption and paper leaks have become the identity of the BJP government. The hard work of lakhs of youths was washed away as the paper of the UPTET was leaked today. Corruption is at its peak as Yogi Adityanathji has been protecting the big fish involved in leaking papers.”

Anshu Awasthi, a Congress leader, said: “Papers of exams meant to recruit constables, secondary teachers, employees of the Uttar Pradesh Power Corporation and the health department have been leaked in the past four years, making it clear that the government has somehow allowed this to happen.”