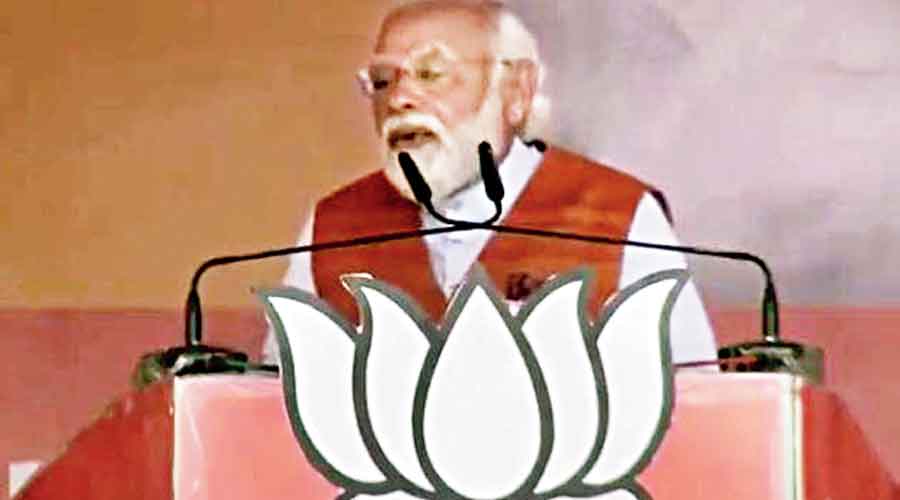 1935: A cartoon shows Jews, communists, and other enemies of the Nazis hanging from a gallows. Any doubt on the identity of the hangmen is removed by the Nazi Swastika symbol atop the scaffold. The website of Holocaust Encyclopedia of the United States Holocaust Museum features the cartoon.

2022, February 19: The Gujarat BJP uploaded a cartoon that shows a group of people, wearing skullcaps and beards that make it clear they are Muslims, being hanged with a common noose. The lotus, the symbol of the BJP, is displayed on the foreground. The title is “Satyameva Jayate”, separated by an image of the State Emblem of India. A day earlier, a court had sentenced to death 38 convicts for the Ahmedabad serial blasts of 2008 that killed 56 people and injured over 200. Twitter took down the cartoon on Sunday evening for violating its rules.

2022, February 20: Prime Minister Narendra Modi tells an election rally at Hardoi in Uttar Pradesh about the election symbol of the Samajwadi Party (cycle) and adds that the bombs in the initial blasts were planted in cycles. Then the Prime Minister delivers the punchline: “I am amazed why they chose the cycle.”

New Delhi: The surprise is not that Prime Minister Narendra Modi has again succumbed to the perverse charm of the dog whistle. The surprise is why he is doing so when he has been bragging that Yogi Adityanath has transformed Uttar Pradesh and when almost every pre-poll survey has projected a BJP comeback in the heartland state.

By lobbing the Ahmedabad blasts into the poll arena and by cloning a Nazi-era cartoon, Modi and the BJP appear to be again conceding that they need something more than the so-called development-and-governance plank to win elections.

If it indeed is so, the overused tactic is also an uncharitable statement on what Modi considers to be his core constituency — an electorate that responds only to issues that seek to stigmatise the minorities.

Addressing a poll rally in Hardoi on Sunday, Modi went into details of the Ahmedabad blasts case and tried hard to link it to the polls.

“Cycle pe bomb rakhe hue the,” he repeated, adding that all the cycles were parked around a vegetable market and they went off together.

Clapping his hand once and with a smile, he struck as if delivering a knockout blow:  “Mai hairan hoon, ye cycle ko unhone kyon pasand kiya (I am amazed why they chose the cycle).”

Modi recalled how the blasts had taken place when he was chief minister of Gujarat and how he had scooped up the “blood-soaked soil” and vowed to get the terrorists punished.

“I can never forget that day when the earth was reddened by the blood of the innocent victims.… I picked up the blood-soaked soil and took the vow that my government will track these terrorists even from pataal (the netherworld) and punish them,” Modi said.

Some of those convicted in the blasts case are from Azamgarh in eastern Uttar Pradesh. In the east, the BJP is facing a challenge from a rainbow alliance clinched by Samajwadi chief Akhilesh Yadav with regional and sub-regional parties representing weaker OBC sections who have accused Adityanath of unleashing “Thakurvaad” in the state, a reference to the dominance of upper caste Thakurs.

Joblessness, destruction of crops by stray cattle, price rise and the farmers’ protest have surfaced as issues troubling the BJP in the Uttar Pradesh polls. It is against this backdrop that Modi has deployed the polarisation attempt.