Advertisement
Home / India / UP: police massacre and encounter killigs to be probed by retired judge

UP: police massacre and encounter killigs to be probed by retired judge

Inquiry to be completed in two months 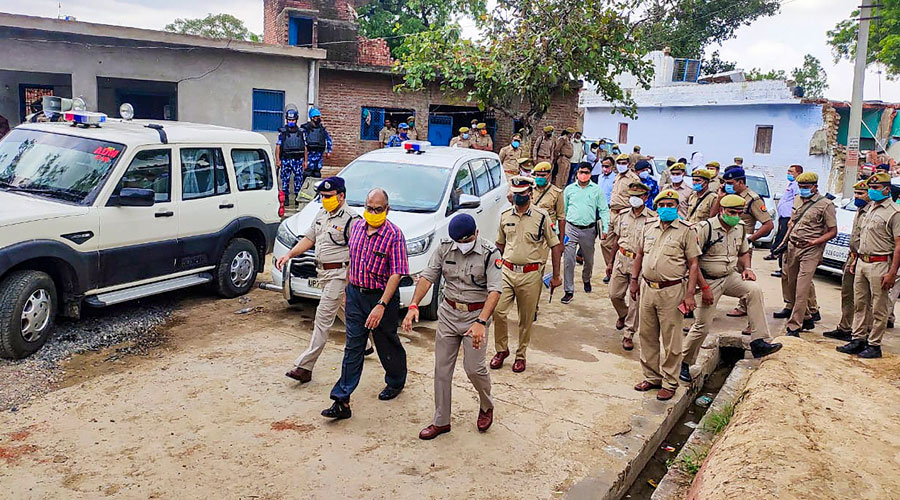 A Special Investigation Team visits the Bikru village, where eight policemen were killed by gangster Vikas Dubey on July 3, for investigation into the case in Kanpur on Sunday, July 12, 2020.
PTI
Piyush Srivastava   |   Lucknow   |   Published 13.07.20, 02:55 AM

The Uttar Pradesh government has constituted a single-member commission to probe the massacre of eight policemen in Kanpur Rural on July 3 and six police encounters, including that which killed gang leader Vikas Dubey, that followed.

Shashi Kant Agrawal, a retired judge of Allahabad High Court, will also give his recommendations to prevent the recurrence of such incidents.

A press note from the state government, which described the incidents between July 3 and July 10 as of “public importance”, said the commission would also probe the connection of Vikas and his gang with the police and other people.

The commission will have its office in Kanpur and complete the inquiry in two months.

Vikas was shot by the Special Task Force on July 10 in the Naubasta area of Kanpur. The police said the STF had fired in self-defence because Vikas had snatched the pistol of a policeman when an SUV in which they were taking the criminal to Kanpur from Ujjain overturned on the road.

Several of the gangster’s aides had been killed in the run-up to his death.

Ashwini Kumar, his counsel, told reporters that Sharma has requested the court to hand over the inquiry to the Central Bureau of Investigation and transfer the case outside Uttar Pradesh. Sharma has raised fears that the Special Task Force, in whose custody he is being held in Kanpur along with Tiwari, would kill him too in an “encounter” like Vikas and five gang members.

Kanpur’s senior superintendent of police Dinesh Kumar P. had said after the arrest of the two police officers that they were in touch with Vikas and had informed him about the planned raid in Bikru on July 3.