UP Assembly polls 2022: Priyanka to field 40 per cent women candidates 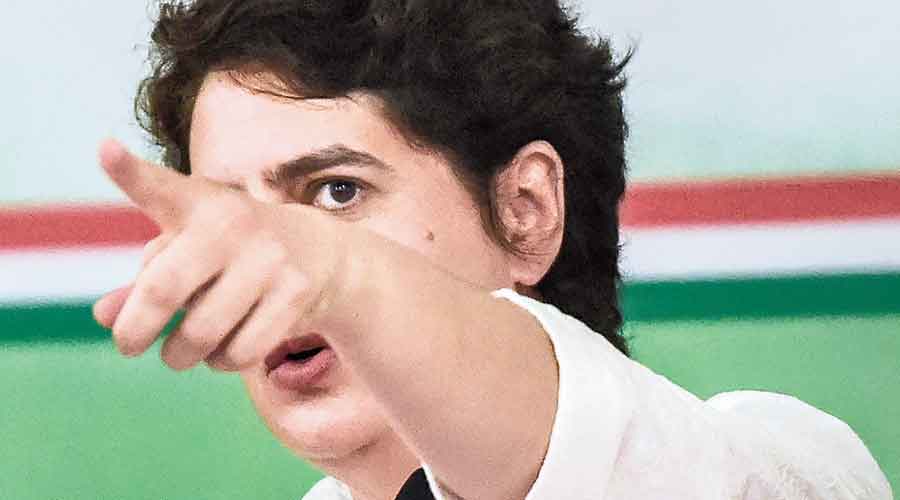 Congress general secretary Priyanka Gandhi Vadra on Tuesday said the decision to field 40 per cent women candidates in the Assembly election in Uttar Pradesh is for “every woman who wants to bring change and expects justice and unity”.

“We have decided that the Congress party in Uttar Pradesh will give 40 per cent tickets to women in the coming Assembly election,” Priyanka, who is the Congress in-charge of the state, said at a news conference in Lucknow.

Replying to a question whether the Congress would give tickets to women from families of its own leaders, she said: “I don’t see anything wrong in doing so. The women grow after joining politics.”

“We pledge that women would participate well in the politics of Uttar Pradesh,” she added.

Explaining why the party took this decision, she said: “Some girl students of Allahabad University had met me when I had come to Uttar Pradesh to campaign in the (Lok Sabha) election in 2019 and they told me how the rules of the university and the hostels were different for them and the male students. This decision is for them.”

“I have taken this decision for the woman who during the Ganga Yatra (March 2019) told me that while she wanted to educate her children, there was no school in her village.

“This decision is for Paro, a girl of Prayagraj (Allahabad) who held my hand and said that she wants to be a leader,” the Congress leader said.

Priyanka said the decision was for the Unnao rape survivor, the mother of the Hathras gang rape and murder victim, and for Vaishnavi, the daughter of journalist Raman Kashyap who was killed in the Lakhimpur Kheri carnage on October 3, who told her she “wants to be a doctor”.

“Another girl I met in Lakhimpur Kheri (last week) told me she wants to become the Prime Minister,” the Congress leader said.

“This decision is also for the women constables Madhu and Puja who took me to the PAC guesthouse in Sitapur (when she was arrested on her way to Lakhimpur Kheri on October 7 to meet the families of the massacre victims) and were on duty at 4am.”

Priyanka said that while she had wished to reserve 50 per cent tickets for women in Uttar Pradesh, she went by the decision of the state Congress committee.

“The Congress units of other states may follow this if they wish,” she said. “Women have to come forward if we want to pull the country out from the politics of religion and caste and take it on the path of politics of development, equality and participation.”

Priyanka said the party has sought applications from women candidates in every Assembly constituency till November 15 and called them to come forward.

With this decision, the Congress is expected to give 160 tickets to women out of the total 403 Assembly seats.

Observers believe it would be a difficult decision for the party to follow as Priyanka has already said in the past that she was not averse to an alliance with anti-BJP outfits. In that case, practical coordination in each seat wouldn’t be easy.

Priu Priyanka side-stepped a question whether she would be the chief ministerial candidate of the party in the Assembly election and said it will be announced at an appropriate time.

Asked how she would deal with family politics within the Congress, she said: “It is true that people put forward their wives, daughters in election but there is nothing wrong in it. They become efficient after joining politics. I remember there was a pradhan (village chief) in a committee who fielded his wife (in the panchayat poll). After a few years, he came to me and complained that she takes her own decisions and doesn’t listen to him. It is the beginning of a process.”