Nirmala Sitharaman on Monday had tabled an Economic Survey that projected an economic growth of 8-8.5 per cent in the next fiscal 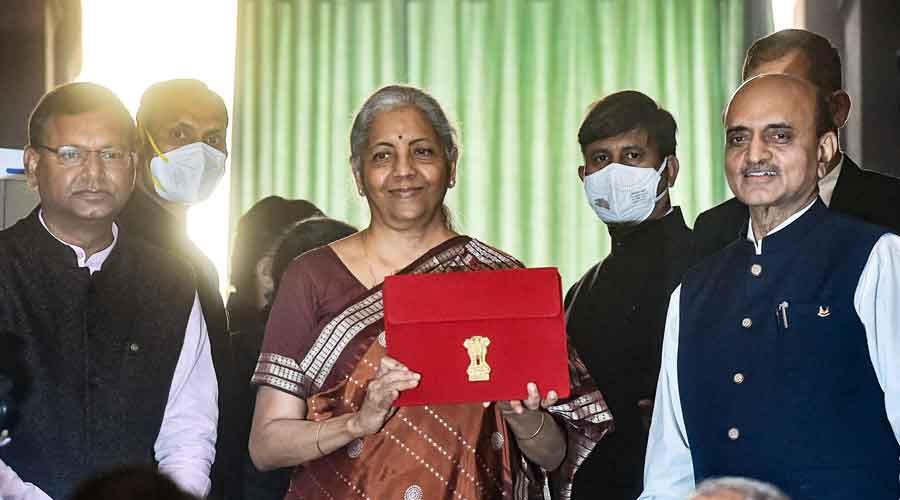 Finance minister Nirmala Sitharaman on Tuesday unveiled a budget that was long on promise and short on effort with no sign of any big-bang reform that could jumpstart a revival in what the Narendra Modi government loves to characterise as the “fastest-growing large economy in the world”.

On Monday, Sitharaman had tabled an Economic Survey that projected an economic growth of 8-8.5 per cent in the next fiscal. Her budget, however, failed to convince even its most ardent fans of how it intended to get there without new taxes to beef up its coffers or even the glimmer of a bright idea that might kindle excitement.

The large claque of Modi supporters had to struggle to find an appropriate moniker to describe Sitharaman’s latest exercise, eventually settling for a humdrum tag: growth-oriented budget.

The epithet was quickly fashioned after the finance ministry boffins cranked up capital expenditure by 35.4 per cent to Rs 7.5 lakh crore from Rs 5.54 lakh crore in last year’s budget.

The surge in capital spending by the government seemed to suggest a massive pump-priming effort to fire up the economy. But drilling down through the budget documents, it was evident that three areas would hog 64.7 per cent of the overall capital spending: railways (Rs 137,100 crore), roads and highways (Rs 187,744 crore), and defence (Rs 160,419.60 crore).

In a grand gesture, the finance minister said she was ready to allocate Rs 1 lakh crore to the states to help them catalyse “overall investments in the economy”.

The amount — which was offered in the spirit of cooperative federalism — would be in the form of 50-year interest-free loans. She said this amount would be over and above the normal borrowing limits of the states.

Amit Mitra, principal chief adviser to Bengal chief minister Mamata Banerjee and former finance minister of Bengal, was, however, quick to denounce the offer as another hoax since there were five stiff conditionalities attached that would make it hard for the states to qualify for the supposed largesse.

Mitra said the budget had failed to address the two pain points: inflation and unemployment. “We are in the midst of a stagflation — high inflation amidst no growth.”

Mamata Banerjee tweeted: “Budget has zero for common people, who are getting crushed by unemployment & inflation. Govt is lost in big words signifying nothing — a Pegasus spin budget.”

BUDGET HAS ZERO FOR COMMON PEOPLE, WHO ARE GETTING CRUSHED BY UNEMPLOYMENT & INFLATION. GOVT IS LOST IN BIG WORDS SIGNIFYING NOTHING - A PEGASUS SPIN BUDGET

There is a flip side to the surge in capital spending: fiscal deficit will go through the roof. The fiscal deficit for 2022-23 has risen by 10.2 per cent to Rs 16.61 lakh crore – which works out to 6.4 per cent of the GDP, suggesting the government has abandoned fiscal consolidation plans, at least for now.

Sitharaman’s speech was mercifully short –- especially after her long-winded speeches in earlier years. Industrialists Anand Mahindra tweeted, tongue firmly in cheek: “Brevity has always been a virtue. Sitharaman’s budget address may prove to be the most impactful….”

Brevity has always been a virtue. @nsitharaman ‘s shortest budget address may prove to be the most impactful…

Automakers were chuffed by the announcement of a battery swapping policy with interoperability standards that could trigger a swarm of electric vehicles on the roads. Start-ups could also grab the opportunity to develop an innovative battery as a service business model, the finance ministry said.

Most of the other industries groaned because there were no real benefits for them in this year’s budget.

Private consumption has been hampered by a lack of jobs, crimped household budgets, and widening income inequalities – and the budget failed to adequately address any of these challenges.

Sitharaman unveiled a proposal to introduce a digital currency to be floated by the Reserve Bank of India later this year. No details were given about how this would work.

Data from the central bank reveals that the total number of notes in circulation as of November 19 last year amounted to Rs 2,961,030 crore. It was not immediately clear whether the digital rupee would replace any of the notes already issued. If it doesn’t, might it stoke inflation which is already running close to the top of the 2-6 per cent band laid down for the conduct of the monetary policy?

The other big decision was to tax profits from transactions in all digital assets including crypto-currencies at a flat 30 per cent with no deduction allowed for any related expenditure except for the cost of acquisition. Sitharaman also provided for a 1 per cent tax deduction at source (TDS) on payments made in relation to transfer of a digital asset above a certain monetary threshold that wasn’t spelt out.

The government sharply scaled back its plans to sell state-run companies after political criticism and market turmoil. It now expects to raise Rs 65,000 crore from the privatisation programme in the next fiscal. It also lowered its estimate of privatisation proceeds in the current fiscal to Rs 78,000 crore from Rs 1.75 lakh crore in the budget estimate.

This left people wondering about the fate of the initial public offering of Life Insurance Corporation (LIC) which is planning to come out with the largest-ever share sale. The LIC issue is expected to raise anywhere between Rs 80,000 crore and Rs 1 lakh crore – and it wasn’t immediately clear whether the government was resigned to the issue possibly spilling over into the next fiscal.

The government did not make any changes to the tax rates but stretched a couple of compliance timelines to help companies make use of existing benefits. For instance, new manufacturing companies established after October 1, 2019, will now have to start production by March 2024 to be eligible for a 15 per cent corporate tax rate. The deadline has been extended by a year.

Focus on long-term growth in budget