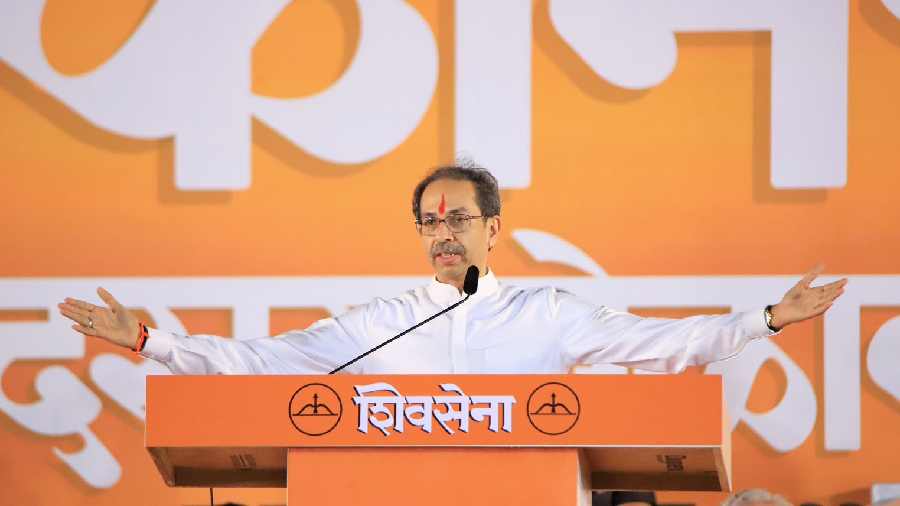 The petition, filed by Thackeray, has challenged ECI's October 8 order, contending it was passed in complete violation of principles of natural justice and without granting any hearing to the parties and giving them an opportunity to lead evidence.

The ECI, by its October 8 interim order, barred the two Shiv Sena factions led by Uddhav Thackeray and Chief Minister Eknath Shinde from using the party name and its election symbol in the Andheri East assembly bypoll.

In the interim order passed following contesting claims made by the rival factions about majority support in the Shiv Sena's legislative and organisational wings, the commission had asked them to suggest by Monday three different name choices and also three free symbols for allocation to their respective groups.

The interim order had come on the Shinde faction's request seeking allotment of the bow and arrow symbol as the Andheri East assembly bypoll is approaching.

Thackeray's petition, which has arrayed the ECI and Maharashtra Chief Minister Eknath Shinde as parties, sought quashing of the ECI order and, in the alternative, sought directions to consider and allot the symbol proposed by Thackeray without restricting the choice of symbol from the list of free symbols notified by the commission.

Since bye-elections have been notified in the State of Maharashtra for 166-Andheri East constituency for which the last date of nominations is October 14, 2022 and the date of poll is November 3, grave prejudice will be caused to the petitioner (Thackeray) and his party if the impugned order is not stayed, the plea said.

Giving examples of the dispute relating to the AIADMK's two leaves' election symbol and similar wranglings in the JD(U) and the Samajwadi party, it said, in all these cases, the order freezing or refusing to freeze the symbol was passed by the ECI only after hearing the parties.

The petition said in this case, without affording an opportunity to be heard despite an application of the petitioner requesting oral hearing, the ECI displayed undue haste and passed the order freezing the symbol of Bow and Arrow' of the political party Shiv Sena led by Uddhav Thackeray, which symbol is intrinsically identified with it, having been used by it since the inception of the party in 1966.

It is pertinent to note here that the said symbol was developed, designed and copyrighted by Late Balasaheb Thackeray, the plea said, claiming the freezing of the symbol is actuated by malice in law and is erroneous as the preliminary reply filed by the petitioner before ECI clearly shows the petition there was not maintainable at the behest of Shinde.

It is further submitted that the only restriction which can be imposed while making the choice of an election symbol is that such symbol should not have been allotted to any other political party and such proposed symbol is even otherwise within the permitted guidelines.

In the instant case, restricting the petitioner from selecting a symbol from a limited list of symbols strikes at the very root of the entitlement of the petitioner to choose or propose a symbol of his own choice, it said.

He sought court's indulgence for a suitable direction ECI to consider and allot the first preference if available, and if not, then the second preference, and similarly, if the same is not available, then third preference indicated by him.

The Thackeray faction has proposed three election symbols for itself in the Andheri East bypoll, including trident (trishul), the rising sun and flaming torch (mashaal).

Shinde had raised a banner of revolt against Thackeray, accusing him of entering into an "unnatural alliance" with the Congress and NCP. Over 40 of the Shiv Sena's 55 MLAs had supported Shinde, forcing the resignation of Thackeray from the post of Maharashtra Chief Minister.

Twelve of the 18 Lok Sabha members of the Shiv Sena also came out in support of Shinde, who later claimed to be the leader of the original Shiv Sena.

The Andheri East bypoll is the first after Shinde and the BJP unseated the MVA government in June, and is considered by political analysts as a precursor to settling of claims by Shinde and Thackeray to be the "real" Shiv Sena.