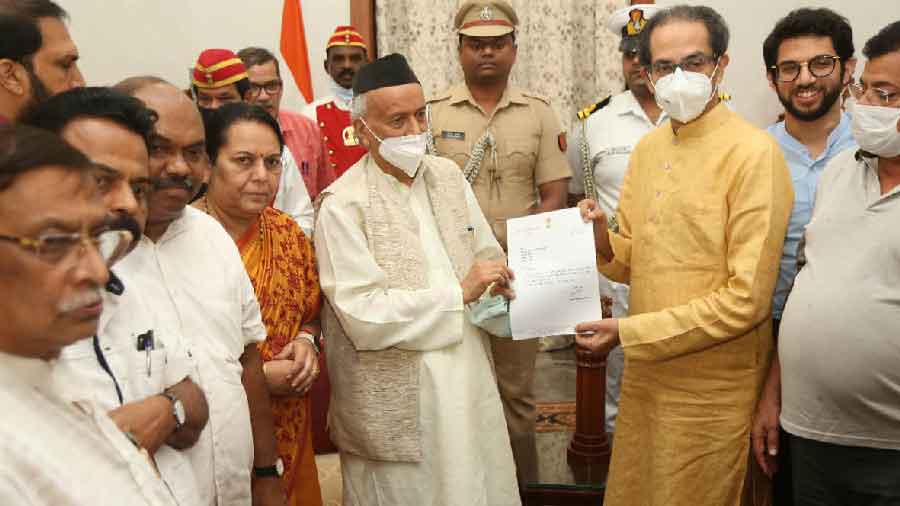 The rebellion in the Shiv Sena not only led to the collapse of the 31-month-long MVA government and the unceremonious exit of Uddhav Thackeray, but also raised question marks about his hold over the party and the very existence of his political outfit, which is being accused of losing its hardline Hindutva identity following a tie-up with the NCP and Congress.

Thackeray quit the top post on Wednesday night, capping over a week-long drama that unfolded after senior minister Eknath Shinde raised the banner of revolt against the party with majority of MLAs joining him.

The rebel legislators have been maintaining that they were forced to go against Thackeray as he kept ignoring their plea to snap ties with the Maha Vikas Aghadi (MVA) allies despite being told that these constituents were trying to "finish off" the Sena.

They also said that after tying up with the NCP and Congress, the Shiv Sena, founded by Hindutva icon Bal Thackeray, was going away from the path of Hindutva. After the rebellion, Shinde even claimed that his was the "real" Shiv Sena, and said that his faction wants to protect Hindutva.

Fighting a legal battle to retain his hold over the party and preserving the political legacy of Bal Thackeray, revitalising the party, instilling confidence in the rank and file that is in a state of shock over the scale of the rebellion, gearing up the frontal organisations are some of the challenges before Thackeray, political observers say.

"Sena's ideology got diluted and it will be difficult for Thackeray to re-establish his hardline Hindutva credentials. If he does not revive it now, Eknath Shinde's allegations that Thackeray had given up the hardline Hindutva, will be proven true. Thackeray tried his bit yesterday by renaming Aurangabad as Sambhajinagar. All through the MVA alliance, he accommodated the Congress and NCP and also called himself a Hindutva votary and he fell between two stools," the observers said.

According to them, adopting soft Hindutva will not work for Thackeray.

The political observers also say that if Shinde moves the Election commission of India (ECI), the bow and arrow symbol of the Shiv Sena could get frozen. "How will the Uddhav Thackeray-led Sena fight the upcoming civic polls, including the all important Brihanmumbai Municipal Corporation (BMC), on a new symbol," they asked.

But Thackeray loyalists feel that the rebel faction cannot claim the party and the symbol because the original political outfit is still intact.

They also feel that Thackeray should give up his "obsession" with Mumbai and go into the rural heartland if he has to widen the party base and make it strong. Similarly, his heavy reliance on his inner circle, which comprises his personal secretary Milind Narvekar and Shiv Sena leaders Anil Parab and Anil Desai to name a few, did not go down well with several party veterans.

The observers feel that Thackeray's move of also resigning from the legislative council shows that he has scant regard for democratic norms.

"He should have used the platform of the legislative council to fight the BJP and expose the rebel group led by Shinde," they said.

Sena's failure to foresee the rebellion puts a serious question mark over the dynastic politics, they said, adding, "The chief minister promoted his 32-year-old son Aaditya, a first time MLA who became a member of his ministry."

Even though the coming together of Shiv Sena, NCP and Congress was described as a unnatural alliance, these three parties managed to survive battling all odds, including the COVID-19 pandemic, which broke out within four months of the new government coming to power.

The BJP, which was smarting under its inability to form the government despite being the single largest party, saying that the 2019 mandate being for the BJP-Shiv Sena combine, made it clear that the government with three wheels would collapse under its own contradictions, which proved true.

Political analysts feel that Thackeray neglected the murmurs of resentment in the Shiv Sena even as he tried to adjust with his new allies.

"He should have kept the communication channels within his own party open along with running the administration," analysts feel.

Thackeray also has to develop new leadership in the party.

Former chief minister and senior Congress leader Prithviraj Chavan felt that Thackeray shouldn't have quit before the floor test. "He should have faced the legislative assembly and addressed the state from the floor of the House. He didn't have the will to fight. He should have gone down fighting," Chavan said.

The observers feel that Shiv Sena mouthpiece 'Saamana' and its executive editor Sanjay Raut should have toned down their language while attacking the rebels and the BJP.

Thackeray has been saying he was betrayed by his own people, they said, adding that it will be time for him to introspect as to why this happened.