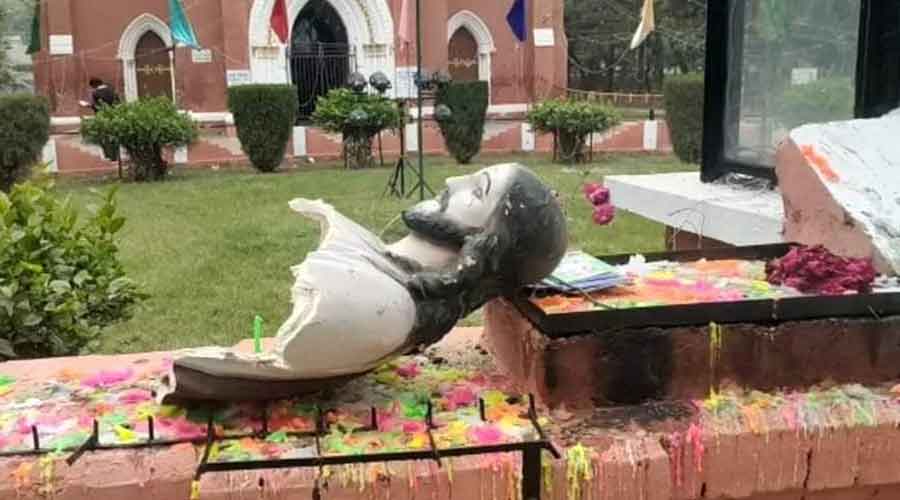 Two men scaled a wall and vandalised a statue of Jesus Christ on the premises of the 173-year-old Holy Redeemer Church in Ambala, Haryana, in the early hours of Sunday.

Sources in Haryana police on Sunday said the statue vandalism occurred between 12.15am and 1.40am. The church had been closed after Christmas prayers got over at 10.30pm on Saturday.

“Two suspects are seen in CCTV footage scaling a wall, trespassing into church property and vandalising the statue of Jesus Christ before breaking some lightings. Raids are on to identify and arrest the criminals,” an officer at Ambala police station said.

An FIR has been registered in the Ambala cantt sadar police station based on the complaint of church authorities and this cctv footage pic.twitter.com/MApf24vbWq

The officer said the crime appeared to have been planned in advance and carried out with the intention of hurting religious sentiments. Pictures showed the statue in pieces near the door of the church.

Father Patras Mundu of the Holy Redeemer Church said the church had been built in the 1840s and “there has never been any such incident since its inception”.

Police sources revealed that Father Mundu had in his complaint said the incident was “a very sensitive issue for the Christian community and our religious sentiments have been deeply hurt”.

A case has been registered against two unidentified men for trespass and committing deliberate acts intended to outrage religious feelings.

The website of Haryana’s tourism department says the church was built in 1848 when troops of the East India Company were transferred from Karnal to Ambala.

Lord Ripon, the only Catholic Viceroy of India, had visited the church. After the old church collapsed, a new church was built at the same place in 1902. In 1956, the church was handed over to Redemptorists.