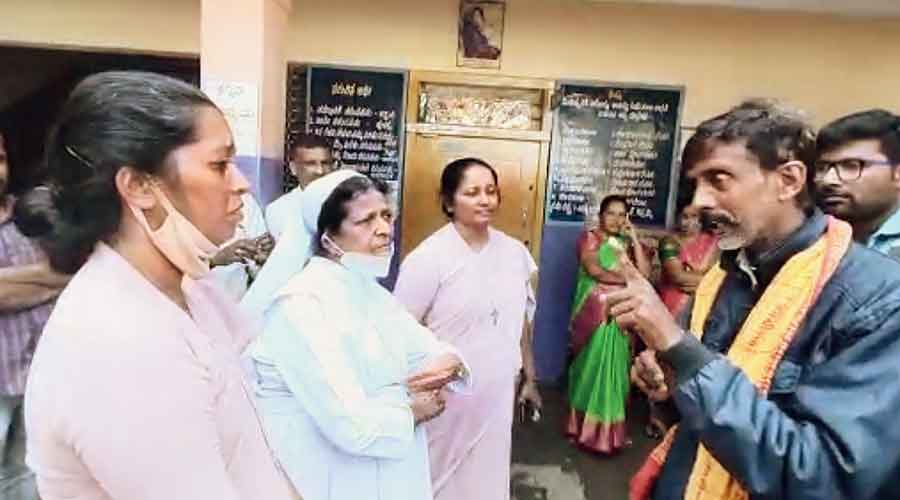 Men wearing saffron scarves barged into two Karnataka schools celebrating Christmas on Thursday and threatened the authorities, accused them of proselytising students and ignoring Hindu gods and traditions, on a day the Assembly passed a bill against “fraudulent” religious conversions.

The schools targeted by the Hindutva activists were the Nirmala High School and the nursery wing of the Vijaya First Grade College in Pandavapura, Mandya district, 160km from Bangalore.

Video clips suggest a single outfit, yet to be identified, was involved in both incidents as some of the men seemed part of both groups of intruders.

The men appear to threaten the school authorities with consequences if they “dare introduce Christianity to Hindu children”.

Three nuns, one of them (the headmistress) in a nun’s habit and the other two in the traditional mild ochre saris, at the Catholic-run Nirmala High School seem to be trying to convince the intruders that the Christmas celebrations had been organised to make the children happy.

But the men appear to accuse them of failing to accord equal importance to Hindu gods and of inculcating Christian religious thoughts in Hindu students.

An activist sporting a saffron scarf purportedly tells the nuns that his nephew has “stopped eating” since being told about Jesus Christ at the school. Another asks why a picture of Saraswati, the Hindu goddess of learning, couldn’t be displayed along with the Christian images.

Other video clips show men arguing with staff at the nursery section of the Vijaya First Grade College, accusing them of ignoring Hindu festivals like Holi and Ganapati Chaturthi, an allegation the officials deny vehemently.

One activist claims that Christianity had piggybacked the British who “looted” India. The college officials are apparently too afraid to tell him that the history of Christianity in India began with the arrival of St Thomas the Apostle in Kodungallur, Kerala, in AD 52.

While the Nirmala High School authorities have lodged a police complaint, sources said the Vijaya college management let the matter rest after some local Sangh parivar leaders made peace with them.

Police sources said no FIR had yet been registered on the basis of the school’s complaint.

Sister Kanika Francis Mary, headmistress for Classes I to VII at the Nirmala High School, told The Telegraph that the activists had come without notice. “We had no idea such a thing would happen on our campus. It has left us shocked,” she said on Saturday.

“The Christmas event was organised by the students, who pooled in money to buy a cake. But they (the activists) did not even try to understand the facts and kept accusing us of converting students, which we never do.”

Sister Mary said the school had an acknowledgement of the complaint it had filed with Pandavapura police station on Friday. “I’m told the police station has summoned that group today.”

The principal of Vijaya First Grade College, M. Krishna Murthy, told this newspaper that the Christmas celebrations were part of co-curricular activities for the nursery children.

“The kids’ care wing had organised this co-curricular activity based on Christmas. But we stopped it soon after some people came to the institution and protested,” he said.

Murthy said the management had decided not to lodge a police complaint.

Christians and their institutions and festivals have faced several attacks in Karnataka since the state’s BJP government announced that it would enact a “strong” law against “fraudulent” conversions.

The Assembly passed the Karnataka Protection of Right to Freedom of Religion Bill, 2021, on Thursday. The bill, which will now have to be passed in the Legislative Council, moots jail terms of up to 10 years and has provisions to annul marriages if one of the parties had changed their religion solely to marry.