Barring one labourer, all the others targeted were linked to the apple trade 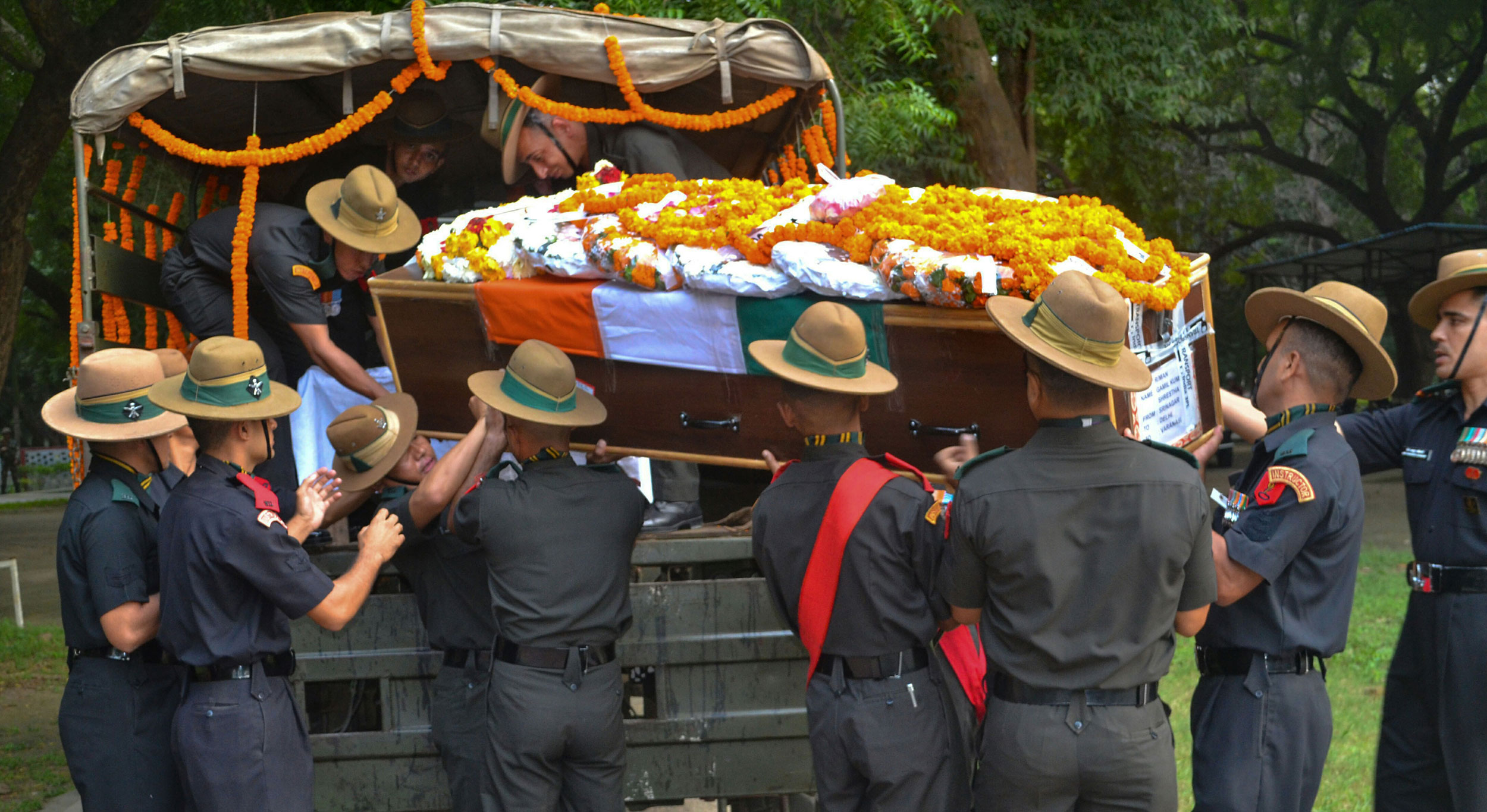 Army personnel carry the mortal remains of Rifleman Gamil Kumar Shrestha in Varanasi on October 22, 2019. The militants have been using violence to drive out non-local people, mostly those associated with the apple trade in some capacity.
(PTI)
Muzaffar Raina   |   Srinagar   |   Published 24.10.19, 07:48 PM

Militants killed two drivers, injured a third and torched three vehicles in a south Kashmir village on Thursday evening, continuing their war on the non-local population in the Valley.

Militants had earlier killed three non-Kashmiris and injured a fourth in three attacks over the past 10 days in different south Kashmir villages.

The latest killings came on a day the borders flared up afresh with Pakistani shelling killing a woman and injuring seven people in the Tangdhar sector of the Line of Control.

Police said the militants attacked a group of truckers in Chitragam Kalan, Shopian, killing two --- including Mohammad Ilyas Khan from Alwar, Rajasthan --- and injuring Jeevan Singh, who was from Punjab.

Shopian deputy commissioner Yasin Choudhary said Singh was critical. Sources said he had been admitted to the SMHS Hospital in Srinagar.

“They were shot and their bodies are partly burnt. We are not sure whether they suffered the bullet injuries first or the burn injuries,” Choudhary told The Telegraph.

The militants have been using violence to drive out non-local people, mostly those associated with the apple trade in some capacity. Barring one labourer, all the others targeted were linked to the apple trade.

The police claim that Hizb militants Naved Mushtaq and Rahil Magrey were involved in the earlier killings.

Apple harvesting has had a delayed start this year, initially because of resistance from some local people who opposed any trade with mainland India in protest against the scrapping of the state’s special status, and later owing to militant threats. Eventually, the militants seem to have permitted the growers to carry on with the business but asked them not to engage non-local people.

“Most of the truckers who ferry the apples to outside markets are non-local. Without them, it’s not possible to carry on with the business,” the grower said.

A drama outside the homes of two children of National Conference founder Sheikh Abdullah on Thursday challenged state police’s claim before Jammu and Kashmir High Court a day earlier that they had never been placed under house arrest.

Khaleda, 84, widow of former chief minister Ghulam Mohammad Shah, and her brother Mustafa Kamal, 80, had told the high court along with Khaleda’s son Muzaffar Shah that all three had been under house arrest since the scrapping of the state’s special status on August 5.

But the police told the court that their liberty had “never been curbed”, prompting the bench to set the hearing for October 31 but observe that the petition was “unnecessary and as such liable to be dismissed”.

The police claim left the trio, who had challenged the “unlawful” detention in the high court, surprised. Shah, who heads the Awami National Conference, then called a news conference at his (Khaleda’s) home on Thursday to react to the police claim.

But the security forces barred the media from getting close to the house, separated by a wall from Kamal’s home.

Shah said that he had, along with Khaleda and Mustafa, later tried to step outside their homes to find out whether they were “really free”.

“We were not allowed to go out. This only exposes the government lie. The fact is, they have lied to the court. This is contempt of court,” Shah told The Telegraph.

A police report filed on October 21 before the court had claimed: “The petitioners mentioned in the petition have neither (been) put under house arrest at Moulana Azad Road on August 5 nor their liberty has been curbed.”

This correspondent had tried to visit the two houses twice, in August and September, but was turned back by the police both times.

Srinagar senior superintendent of police Haseeb Mughal insisted that the trio were not under house arrest.

Asked why they were not allowed to move out then, he said: “I will not share the details with you. We will give the report to the court and not to the media…. If a report has gone there (the court), it is based on facts.”

Shah said that he, Khaleda and Kamal had not been “allowed to venture out even once” since August 5.