Shah, who controls Delhi police, made no mention of Sunday’s brutal attack 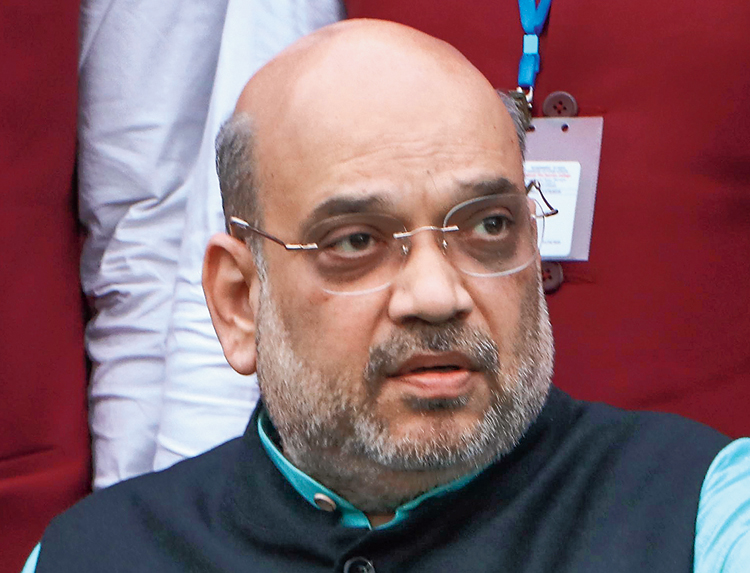 Home minister Amit Shah on Monday trained his guns on the “tukde-tukde” gang in an indirect reference to JNU, asking whether those raising slogans against the country shouldn’t be put in jail as the BJP and the saffron family blamed the Left for last night’s violence at the varsity.

The “tukde-tukde gang” is a Right-wing coinage that initially referred to a section of JNU students after the 2016 campus unrest, but is now used against those who the BJP and its ideological brethren think are out to divide India.

Shah, who controls Delhi police, made no mention of Sunday’s brutal attack by “masked goons” but accused chief minister Arvind Kejriwal of protecting those who had raised anti-India slogans.

“Shouldn’t students who raised anti-India slogans be put behind bars? Kejriwal is not providing sanction to the Delhi police to file chargesheets,” the BJP chief said, speaking at a foundation stone-laying ceremony in Delhi.

Shah has repeatedly used the expression “tukde-tukde gang” in his speeches since the Lok Sabha elections to refer to a protest at JNU when Kanhaiya Kumar, who is now with the CPI, was the president of the university’s students’ union. Kanhaiya and another student leader, Umar Khalid, are accused in a case relating to anti-India slogans.

While Shah was silent on Sunday’s attack inside JNU, the BJP and the saffron parivar went all out to try and shift the blame on the Left. The BJP’s social media campaign, led by its IT cell chief Amit Malviya, had been set into motion from Sunday night itself.

“We strongly condemn the violence on JNU campus. This is a desperate attempt by forces of anarchy, who are determined to use students as cannon fodder, create unrest to shore up their shrinking political footprint. Universities should remain places of learning and education,” the BJP tweeted on Sunday evening.

The BJP sought to give a spin to the attack, sidestepping slogans clearly heard on videos, such as “Bharat Mata ki jai” and “desh ke gaddaron ko, goli maaro saalon ko”, that the masked goons had raised, leaving little doubt about who the attackers were.

“Left goons planned attack on ABVP students on WhatsApp groups; Involvement of Left in #JNUViolence conclusively exposed #BanAISASFI #OpposeLeftViolence #LeftAttacksJNU,” said one of a series of tweets by Prafulla Ketkar, editor of the RSS mouthpiece Organiser.

The ABVP is the student arm of the RSS.

Both Malviya and Ketkar posted videos claiming how ABVP-affiliated students had been injured in the attack to back their claim that Left students were to blame.

Union minister Prakash Javadekar came down heavily on a British daily on Monday for referring to the masked mob that attacked JNU students and teachers as “nationalists” and asked it to stop predicting India’s disintegration at every opportunity, PTI reports.

“I know it’s a bit too much for you to understand India, but here’s an effort: Stop predicting the breaking apart of India at every possible chance you get. India is a diverse democracy and it has always assimilated all differences to emerge stronger,” he tweeted.