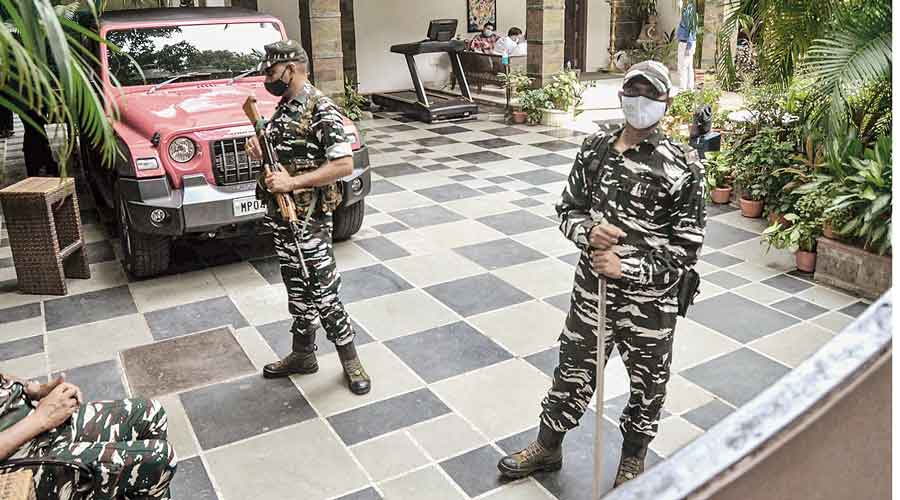 Congress leader Rahul Gandhi said on Thursday that truth written with ink on paper was enough to frighten a weak government, reacting to the income tax raids on the Dainik Bhaskar group of newspapers.

The Opposition party said the raids on one of the largest Hindi daily groups, which had widely reported on the government’s mismanagement of the second wave of the pandemic, was part of the Narendra Modi dispensation’s attempts to create an “era of fear” through tyranny and despotism.

The Congress insisted that it was not about targeting “Group A or B” as the issues involved were more fundamental to India’s democracy — the freedom of media and the draconian nature of the government.

The party said the Centre was trying to crush democratic freedom and rights in every sphere of life, as manifested in the clampdown on the Opposition in Parliament, the attitude towards the farmers’ protest, the refusal to investigate wrongdoings and the persistent attacks on the media.

Rajasthan chief minister Ashok Gehlot said: “The Modi government cannot tolerate even an iota of criticism. Due to its fascist mentality, the BJP doesn’t want to see the truth in a democratic set-up. By indulging in such actions and gagging the media, the Modi government wants to convey the message that if the media doesn’t become godi media, then its voice will be suppressed.”

Congress veteran Digvijaya Singh predicted worse attacks on the media as the political opposition to the Modi government builds up.

In several tweets, he wondered why people were shocked as this was the BJP’s governance model.

“They succeeded in Gujarat by curbing opposition, but at the national level it may not be that easy. I have been warning about Modi’s style of governance from day one. They have only CBI-ED. And this is just the beginning. They would become more vindictive as opposition grows nationally. All should get together to condemn it and fight the Modi-Shah duo at every level,” Digvijaya said.

Congress spokesperson Abhishek Manu Singhvi said: “It is not about one particular group. The fundamental issues are freedom of press and the draconian nature of the government. Today they went for A, tomorrow they will go for B. We are least concerned whether it is ‘A’ or ‘B’ or ‘C’.

“You are all journalists, you know that it is the freedom of expression that matters much more. The issue is why are central agencies being misused to attack all institutions. We can use any adjective — totalitarian, autocratic, despotic, tyrannical… the main issue is of course the anti-democratic mindset.”

Recalling that the Dainik Bhaskar had published a series of critical reports on the government’s handling of Covid and its editor had written an article about bodies floating in the Ganga in The New York Times, Singhvi said: “There are several examples of attempts to create an era of fear. An Uttar Pradesh television channel, Bharat Samachar, was also raided today. Their reporting has also been critical of the Yogi (Adityanath) government.

“In January 2021, the Enforcement Directorate raided (the web portal) NewsClick’s New Delhi office, as well as the homes of its editor-in-chief, Prabir Purkayastha, one other editor, and two members of its management.”

Calling upon every section of society to rise against this attack on the media, the Congress leader added: “After filing a case against online news platform The Wire and several others over tweets linked to the assault of a Muslim man in Uttar Pradesh’s Ghaziabad, the state police have filed another case against the news website — this time in Barabanki.

“On October 11, 2018, a few income tax officials conducted a 22-hour raid at the office of news portal Quint. In June 2017, the CBI raided the home of NDTV promoter Prannoy Roy on the charges of tax evasion.”

Delhi police on Thursday obstructed Congress MPs Pratap Singh Bajwa and Deepender Hooda when they were talking to reporters outside Parliament about the farmers’ struggle. The police told them to seek permission from the higher authorities before briefing the media.

Outraged, the MPs moved a privilege motion in the Rajya Sabha against Delhi police for trying to curb their freedom of expression.

Oxygen: Rahul hits out at Centre